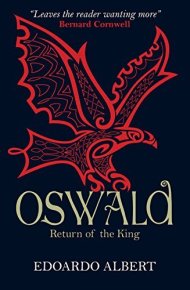 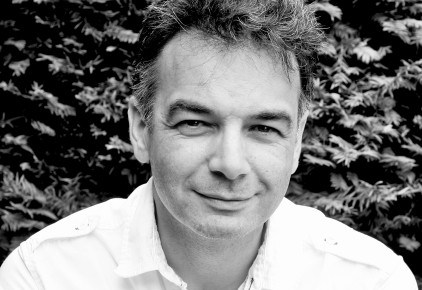 Having warmed to Albert’s Edwin in its second half, I was keen to follow the struggle for Northumbria into its next generation. Oswald opens in 633, with High King Edwin’s death in battle against Penda of Mercia, and Cadwallon of Gwynned. His fall throws his kingdom’s future into the balance as predators circle the vacant throne. Cadwallon would have Northumbria as a client kingdom, but there are still men living who have the right to rule as independent kings. These come from two rival families: the Yffings (descendants of Edwin) and the Idings (descendants of Edwin’s predecessor, Aethelfrith). And whoever becomes king must now face up to this new power that has grown, unchecked, in the west. Northumbria desperately needs a worthy leader, but the one who can best answer that call is, ironically, the one claimant who wants nothing less than to be a king.

Oswald, eldest son of Aethelfrith by his wife Acha (herself Edwin’s sister), has grown up in exile on the Holy Island of Iona, taming his wild spirit to the windswept beauty of this land and the calm rhythm of the monks’ daily life. Indeed, he has grown to believe that he could be happy to stay on the island and become a monk himself; but his wyrd lies on a different path. When news comes of Edwin’s death, and Cadwallon’s despoiling of Northumbria, Oswald is urged to return to his father’s kingdom and claim the throne – by his younger brother Oswiu; by the Abbot of Iona; and even by part of his own heart. For a while, Oswald hopes that the kingdom can be brought under the rule of another man: his older half-brother Eanfrith, perhaps; his cousin Osric; or maybe even his cousin Eadfrith, son of Edwin. But, one-by-one, these possibilities are extinguished. And then Oswald must face up to the greatest test of all: to find a way to rule without sacrificing his faith.

In this instalment, Albert delves more deeply into the contradictions that we’ve already seen developing in Edwin, between the message of peace and charity preached by the Christian faith and the pillage and gold-gifts expected of a strong king in Anglo-Saxon England. Oswald is not the only character torn between a traditional way of life and an incompatible set of beliefs: Sigeberht of East Anglia faces a similar challenge and, by giving up his crown to enter a monastery, follows the route that Oswald so craves. (It is a rare historical novel, surely, which features two future saints among its cast list?) Yet, in Albert’s hands, the question of faith is revealed in all its complexity. It isn’t simply a question of paganism or Christianity: the Christians themselves are divided, between the monastery-based faith of the Britons, inspired by the religious communities of ancient Egypt, and the new faith sanctioned by Rome, which focuses on the intercession of a priest and is closer to Catholicism as we know it now.

Of those who still adhere to the old gods, the priest Coifi best embodies the psychological struggle of the time. He and his friend, the scop Acca, journey across the kingdom seeking a new lord and allowing us to see at first hand the swift changeover of ill-fated Northumbrian aethelings – Osric, Eanfrith and Oswald in turn. But Coifi also gives us an insight into the torment of a man whose very purpose has been pulled out from under him and who fears his gods have deserted him. His sense of loss is beautifully evoked:

Once, the workings of wyrd had been clear to him, the weavings of the fate singers revealed in rattle bone and leaf fall, in smoke rise and blood fall, but his vision had dimmed, leaving him a haunted, hunted creature, searching always for the track that eluded him, as a hunter lost in the woods, slowly coming to the knowledge that that which he had once hunted was now hunting him.

The book isn’t all about religion though: there are plenty of finely-written battles, feasts, tricks and cunning stratagems. Political divisions abound in this changing Britain, and one of the book’s strengths is to emphasise the differences between Britons and Anglo-Saxons which go deeper than faith. The native Britons see themselves as scions of a great past: they are the heirs of Arthur, whom they firmly believe will rise to lead them again, and they also see themselves as ‘Romans’, sworn to defend their land against the barbarians. For their part, the Anglo-Saxons waste no time in dreams of the past: their energy is directed towards the present and they believe that each man answers for his own fate. This is an attitude that has led them to victory so far, but how will they tackle a new breed of rivals who look, instead, to the rewards of the future – after death?

As you may remember, I had trouble warming to the characters in the first book, but found this sequel more engaging. Oswald’s struggle to reconcile the two halves of his life makes him more interesting than the inscrutable Edwin, and his relationships with his friend Aidan and his brother Oswiu bring depth and humanity to his characterisation. It isn’t absolutely perfect – Oswiu doesn’t develop much beyond ‘charming scapegrace’ (maybe he’s saving himself for the next novel), and the brothers’ light-hearted banter strikes an odd note against the sweeping grandeur of Albert’s usual prose. But it feels more human, more alive. And it isn’t just the heroes of the piece who work well. I was fascinated by the shrewd, subtle Penda who has clawed his way to prominence by his own merits and who prowls at the edge of the Northumbrian lands. I particularly enjoyed the scene in which Penda presents his rival Eadfrith to the witan of Mercia, made just presentable enough after his long captivity (washed, ‘but not too well‘). But Penda hasn’t bargained for his opponent’s wits: Eadfrith’s masterful address to the witan on the death of Cearl, laden with implication and accusation, reminded me of Antony’s funeral speech in Julius Caesar.

And that isn’t the only moment which rang bells with me. The debt to Tolkien is one that Albert freely acknowledges in his extremely thorough author’s note, and which begins with the book’s very title. Yet there were other subtle nods I thought I spotted: at least two occasions when characters observed that ‘winter is coming’, and the coincidence that Oswald’s pet raven was called Bran (it only has two eyes though…). But Albert’s own prose is strong enough to stand against any debts of this kind. Take this wonderful section, for example, as Oswald on Iona laments the situation in Northumbria:

Now the king is dead and the law with him. Now there is only the sword, and the men who wield it, taking what they will. The wolves are circling, Oswiu, the ravens picking at the flesh, and we have hardly the men to do more than raid among raiders, to plunder and despoil and make a brief, sorry stay against death … This world reeks of death, brother, and glory is but a lightning flash before night falls.

It can’t be easy to write a novel about someone who ended up being a saint, especially someone for whom so few sources survive, but Albert’s Oswald is a believable character: noble, conflicted and susceptible to concupiscence. The book flows much more easily than its predecessor, combining events from history and legend with an utterly convincing recreation of the time. And, as you can see, there are times when the writing could have been taken straight from an epic poem.

From this point on, the history of Northumbria is beyond my ken until the 9th century, so I’m looking forward to seeing what the final book, Oswiu, has in store for me.

Last in the series – Edwin: High King of Britain

6 thoughts on “Oswald: Return of the King: Edoardo Albert”