Spare a thought for French history painters of the 18th century. They’re overshadowed on one side by their glamorous 17th-century predecessors, bathed in the reflected glory of the Sun King and, on the other side, by the tousled, poetic 19th-century Romantics. If people associate anything with the 18th century, it’s frills, furbelows, plump putti and simpering shepherdesses. But this isn’t actually representative of what people would have seen at the time. The concept of the public national gallery hadn’t yet taken hold, but the French could still admire splendid works by the leading artists of the day – not in the secular cathedral of the museum, but in the literally hallowed spaces of Paris’s churches. This splendid show reunites some of the period’s great religious canvases, many of which have been restored. Vibrant colours shimmer on the walls, dismantled schemes are reunited, and a generation of virtually forgotten artists is brought back to the public eye.

The whole point about church painting, of course, is that (generally speaking) one doesn’t see it unless one goes to that particular church. It’s been years since I did a church crawl in Paris and so everything was delightfully fresh and new. It was fascinating to come across artists whom I know as mythological or genre painters, or draughtsmen, tackling religious painting. Sometimes they succeeded and sometimes they didn’t; interestingly, different works by the same artist varied dramatically in quality. Largillière, for example, who I rate highly as a portraitist, turned out to be surprisingly inept as a religious painter, based on the rather unpleasant Adoration of the Magi and Nativity on display here, both painted c.1730 for Saint-Suplice. Other painters turned out to be very gifted at ecclesiastical compositions: I came away with renewed respect for Carle Van Loo.

Le Baroque des Lumières: view of the ‘set design’ in the second room, which evokes a church setting with a high altar, side chapels and clever lighting to suggest high-set windows

The star of the show for me was the immense Magnificat by Jean Jouvenet, which greets you in the first room. Five metres square and blazing with newly-restored colour, it was painted in 1716 for Notre-Dame (and still hangs there, when not in this exhibition). It’s clear that this is a masterpiece by a mature, confident artist, but I was surprised to discover that Jouvenet was 73 at the time. It doesn’t feel like the work of a fading old man (he died the following year), nor of someone who had been forced, three years before, to switch to his left hand after his right was paralysed. The signature reads ‘Dextra paralyticus, sinistra pinxit’, which must be a boast. Given the quality, it can hardly be taken as a handicap. It’s a tremendous piece of work, though admittedly not one that’ll convert anyone suspicious of the highfalutin Baroque style. I was particularly struck by the group of figures in the left foreground, who reminded me of something I couldn’t quite place at the time. Now, I realise that it echoes Poussin’s Triumph of David in Dulwich.

Still reeling from the Jouvenet, I was even more impressed by the exhibition design of the second room, which reconstructs the church setting for which these pictures were intended. Pilasters and arched niches lead the eye down the room to the ‘high altar’, while the lighting suggests sunlight coming in through high paned windows and sacred music plays softly in the air. A friend of mine felt that it was all slightly overdone but, with my taste for the theatrical, I rather liked it. And the design leaves plenty of space to step back and admire these pictures, which are among the most impressive in the exhibition.

Artists who stood out for me in this section were Noël Halle, whose Christ and the Children (1775) was painted for the chapel of the College of the Grassins and is now in the church of Saint-Nicolas-des-Champs. There was something almost Venetian about its colour palette and the freedom of its dashing brushwork. Jean Restout also impressed me with his dynamic Baptism of Christ, while Jean-Baptiste-Marie Pierre contributed a marvellously wacky, and completely historically inaccurate picture of The Martyrdom of St Thomas Becket (1748), painted for Saint-Louis-du-Louvre and now in Notre-Dame-du-Nativité de Bercy.

And I’d be remiss to omit the most overwhelming picture in that room: The Martyrdom of St Hippolytus by Simon Julien (who’s obscure even to me). Painted in 1762, this was first given to the church of Saint-Hippolyte and is now in Lyon Cathedral. It’s astonishing. Not only is it absolutely vast, but at first glance it looks like a picture of the classical Hippolytus, dragged along behind his chariot. The only indication that this is a Christian subject is the slightly disproportionate angel at upper right, who feels like an afterthought: Julien appears to be much more interested in the drama of his subject and in the flesh-painting of Hippolytus’ muscular, inverted body (clearly painted from an academic nude).

One of the most satisfying things about the show is that, where possible, the curators have tracked down preparatory studies or oil sketches for finished works. Sometimes they stand in for the final pictures, which are either lost or impossible to move, but in several cases we can trace the development of a composition. For example, look at Carle Van Loo’s Adoration of the Angels (1751), painted for the church of Saint-Suplice and now in the Musée des Beaux-Arts, Brest . The final painting occupies pride of place on the ‘high’ altar in the second room. It’s not the most riveting picture in the world, but I thought it was one of the more successful compositions and I especially liked the foreground angel, whose head and wings are set off in contre-jour by the radiant light of the Christ Child. Round the corner, you can see two of Van Loo’s preparatory oil sketches: the first, a monochrome prèmiere pensée (also from Brest) in which the Virgin and Child sit at the glowing centre of a vortex of angels; and the second, a coloured oil sketch (from the Musée de Picardie in Amiens), which is much closer to the final picture. Interestingly, neither of the studies gives Joseph the imposing position that he occupies in the final painting. Perhaps the patron wanted him to be brought out of the shadows? 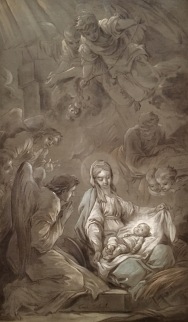 Carle Van Loo, The Adoration of the Angels, 1751, painted for the church of Saint-Suplice, now in Musée des Beaux-Arts, Brest (finished painting)

Another creative bit of design reconstructs the lost chapel of Paris’s Foundling Hospital, founded around 1750 and painted by a team of artists. Gaetano and Paolo Antonio Brunetti, a Venetian father and son, created a fantastic architectural setting on the walls, with trompe l’oeil columns and niches and, most amazing of all, a coffered ceiling that seemed to have fallen into ruin, with the sky visible through gaping holes. Charles Natoire painted an Adoration of the Magi for the high altar and, in the niches on both sides, showed groups of figures from the Magi’s entourage. Unfortunately this ambitious scheme quickly disintegrated due to damp, but it’s recorded in several prints and so the exhibition designers have blown up and joined together details from those prints to create a 360° immersive reconstruction. It’s very cleverly done.

And similarly immersive painting also crops up in altarpieces and chapels. Take a look at Nicolas-Bernard Lépicié’s painting of the Calvary Chapel in the church of Saint-Roch (c1760, Musée Carnavalet, Paris), where a staggering trompe l’oeil cavern broke open on the altar wall to afford the faithful a glimpse of Christ on the Cross. Or Charles Coypel’s oil sketch for a Supper at Emmaus (also from the Carnavelat, and far more successful than his saccharine picture of the same subject on view in the other room). Here the worshippers would have looked up a flight of steps, drawn by the ascending figure of a servant, to where Christ stood behind a table in a blaze of light, aureoled by putti. The finished painting is apparently still in situ in the church of Saint-Merri. I didn’t have time to go there, but I imagine it’s very impressive.

Religious painting in the 18th century wasn’t restricted to scenes from the Bible: there were a whole raft of new saints and new religious orders who needed to be glorified. Three other paintings which also caught my eye relate to these ‘modern’ religious themes: look at Noël-Nicolas Coypel’s St Francis of Paola, for example (1723, painted for the convent of the Minims in the Place Royale and now in Lyon Cathedral). In this large and rather bizarre painting, the 16th-century founder of the Minims sails across the Straits of Messina on his cloak, accompanied by a handful of companions and urged on by burbling cherubs from the clouds above. Opposite, is Jean-François de Troy’s Preaching of St Vincent de Paul (1730), painted for the Mission of Saint-Lazare and now in the church of Saint-Pierre in Mâcon. The virtuous saint, alas, is less interesting than the tumult of humanity crammed in at the foot of his pulpit. Finally, I rather liked Louis-Jean-François Lagrenée’s crisp and clear picture of St Germain giving a medal to Saint Genevieve (1771, painted for the priests of the Oratory and now in the church of St Thomas Aquinas). 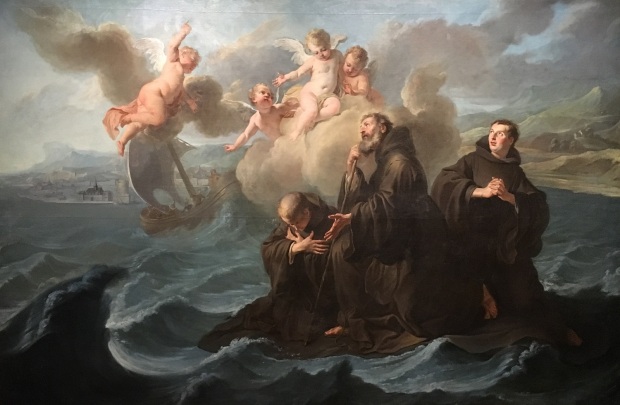 Noël-Nicolas Coypel, St Francis of Paola, 1723, painted for the convent of the Minims in the Place Royale and now in Lyon Cathedral

The exhibition goes up to the late 18th century and it’s noticeable, as we come towards the end, that the bravura and colour of the early rooms has faded away. Under the influence of neoclassicism, religious scenes often become sober and self-consciously ‘antique’, in a way that seems designed to appeal to more learned audiences than the cheerful, popular flair of the earliest paintings. Jean-Germain Drouais’s Return of the Prodigal Son (1782, Church of Saint Roch) could be a classical scene, full of the rigour and stoicism of David. It’s hard not to feel that some of the joy went out of religious painting with the Revolution, leaving people obliged to aspire to secular ideals rather than religious emulation. What we see in this Petit Palais show is the end of an era: the last, brilliant flare of the Baroque before Church gave way to State as the dominant force in people’s lives.

You really must go to see this if you get the chance. There are many lovely things I haven’t got space to mention, and it’s surely a unique opportunity to have everything in one place and to easily compare the pictures. There is a vast, scholarly catalogue in French, which I decided not to buy for myself, and the organisers have also drawn up a walking tour of other pictures still on show in their churches, so that you can explore more of Paris’s religious painting in situ. It’s a truly enlightening introduction to painting of this period, and I’ve come away with a much more profound appreciation of certain artists. More than that, though, it’s just such a beautiful exhibition to visit: well-designed, creative and leaving you itching to go away and find out more. 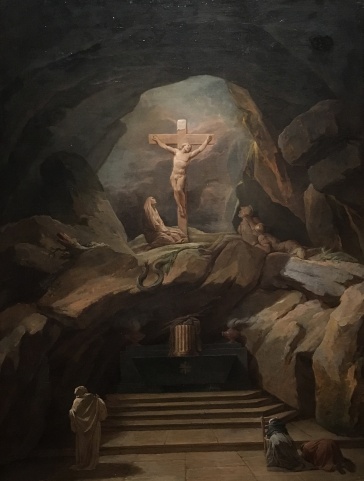 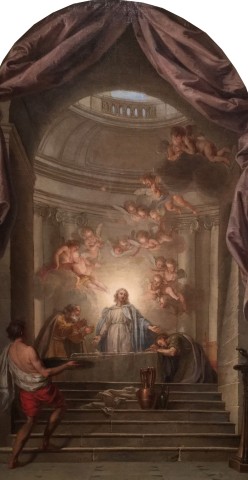 Charles Coypel, The Supper at Emmaus, 1749, oil sketch for the painting in Saint-Merri, Musée Carnavalet, Paris