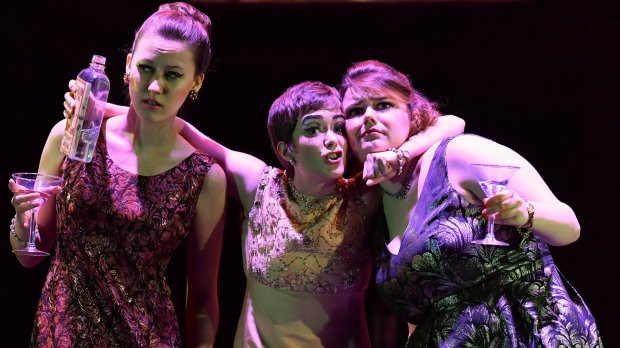 You can’t accuse Handel of not being productive. He wrote Faramondo while recovering from a stroke and, having finished it on Christmas Eve, began his next opera on Boxing Day. That would become Xerxes, one of his most enduringly popular scores, but Faramondo itself has never enjoyed the same acclaim as its younger sibling. There are perfectly good reasons for this, namely that the opera itself is a bit of a mess, but the students of the Royal College of Music have gamely taken up the gauntlet in this staged production, performed as part of the London Handel Festival. They’re accompanied by the London Handel Orchestra, with Laurence Cummings directing from the harpsichord; I also spotted Leo Duarte tucked in at the back with his trusty oboe.

There are a lot of very silly plots in Baroque operas but Faramondo suffers from one of the most impenetrable. The libretto was originally by the Venetian poet Apostolo Zeno, but it had already been much changed in preparation for Francesco Gasparini’s 1720 setting of the opera. Handel himself revised the text further, knowing the modest attention span of his London audience, cutting eleven of Gasparini’s 39 arias and (presumably) swathes of recitative. I can only assume that Handel’s own opera has been further edited to bring it down to a comfortable length for a modern audience, who tend to start twitching at around the three-hour mark. The result is a nonsensical and needlessly complicated story, in which familiar motifs – kings falling in love with their enemies’ sisters; improbably virtuous heroes; and irritable princesses – are compounded by the special addition of a swapped-at-birth subplot. Because it wasn’t complicated enough as it was. It doesn’t bode well when even the programme can’t summon up the energy to do anything but damn the opera with faint praise: ‘the opera may be somewhat unmemorable but it is not unenjoyable‘.

So, let’s gird our loins and see if we can make sense of what’s going on. The story takes place not in the exotic reaches of the Roman empire, but in early medieval Germany. That subject presumably explains the choice of this problematic opera, as the Saxon Handel sought to flatter the Hanoverian King George II. 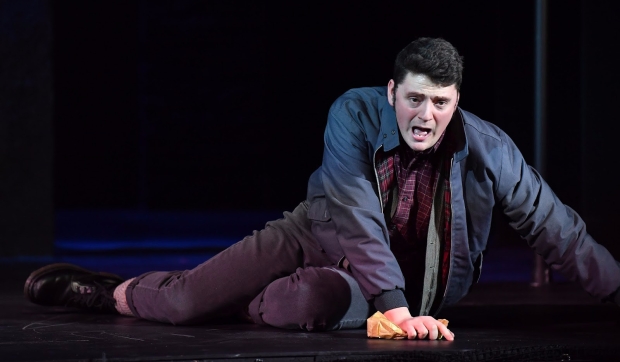 From the other cast: Gernando (Timothy Morgan) © Chris Christodoulou

Faramondo (Pharamond) is king of the Franks. As the opera opens, he incurs the sworn vengeance of his enemy Gustavo, king of the Cimbrians, by killing his eldest son Sveno in battle. Faramondo’s sister Clotilde has been captured by Gustavo, who falls in love with her but is unrequited: she is already passionately devoted to his son Adolfo. (It is never explained how Clotilde and Adolfo could possibly have met before, but this obviously doesn’t matter.) Meanwhile, on the other side of the forest, Gustavo’s daughter Rosimonda has fallen into the clutches of Faramondo who, unsurprisingly, immediately falls in love with her and shows his nobility by freeing her and restoring her lands. Both ladies experience the usual torn loyalties as they find themselves enchanted by men who should be their enemies.

Just to confuse things further, both Gustavo and Faramondo (who are essentially noble) have troublemaking friends. Faramondo has an uneasy alliance with Gernardo, King of Swabia, who has ambitions on Rosimonda and doesn’t appreciate his ally’s blossoming feelings for the princess. Gustavo has his general Teobaldo who, in the manner of generals throughout Baroque opera, is about as trustworthy as a weasel and has already secretly duped his master by exchanging his newborn son Childerico for Gustavo’s son Sveno. This means (keep up at the back!) that the Sveno killed by Faramondo was not actually Sveno at all, but Teobaldo’s son, switched at birth, and that Teobaldo’s diffident son Childerico is the unwitting true son of Gustavo. As the whole plot boils down to Gustavo’s pigheaded refusal to forgive the murderer of his ‘son’, despite his growing admiration for Faramondo as a man, the device of the swapped infants provides a neat way to solve the Gordian Knot of the final scene. Teobaldo is forced to confess and suddenly everyone is delighted, the young lovers are united in marriage, and everyone forgets about poor Sveno, whose death is revealed as a mere MacGuffin.

This production sets the action in a grimy, gangster-ridden underworld, where Faramondo and Gustavo head rival gangs. The obvious parallel is West Side Story, but there’s more of a mods-and-rockers vibe, with Faramondo and his boys rocking leather jackets and curls, and going to war with motorbike helmets and baseball bats. The moddish Gustavo’s gang wear sleek suits and hang out in the gin palace where Rosimonda works as a singer, their flick-knives never far away. Conceptually, this worked very well and allowed for easy scene changes using a few walls and curtains to create the various spaces.

It did, however, feel very bleak and dark compared to the other productions I’ve seen in this theatre, which made good use of coloured backdrops on the screen behind the stage. It also felt immensely static. With one exception, the cast sang arias standing still, or occasionally walking here and there, while other characters on the stage just stood still and watched them – frequently without any change of expression. There could have been much more thought given to the choreography, and livelier acting would have helped a lot.

I didn’t see the same cast as most of the reviewers online and, though the student singers were extremely component, there were only two performances that really excited me, and had me sitting up with anticipation whenever the characters appeared on stage. These were the two princesses, Clotilde and Rosimonda. The latter (Ashlyn Tymms) was superbly imperious, with a rich, commanding mezzo that tended towards the lower end of the scale: it was no surprise when I read that she’s studying with Patricia Bardon. She has something of the same stage presence. Occasionally her coloratura could have been a little tighter, but I enjoyed her immensely, not just for her strong voice but also her vivacious acting.

The star for me, however, was Amy Manford‘s Clotilde. She has the kind of supple soprano that’s perfect for lighter, more playful roles like Xerxes‘ Atalanta, and to my inexpert ears she sounded one of the most polished members of the cast. Not only that, but she was the best actress on the stage, developing the character across the course of the opera. This Clotilde was a pretty blonde princess on the surface, but was hiding – with increasing difficulty – a serious drink problem. Manford sang her grand Act 2 aria, Combattuta da due venti brilliantly: her troubled Clotilde, fuelled by champagne and vodka, became the kind of emotional, clingy drunk who latches on to total strangers to share her problems. This, and her earlier Act 1 aria Mi parto lieta, were the two highlights for me.

From the other cast: Gustavo (Kieran Rayner) and Clotilde (Harriet Eyley) © Chris Christodoulou

Kamilla Dunstan, singing Faramondo, pulled some wonderful notes out of the bag for her cadenzas but never quite managed to excite me; she did, however, have the difficult task of living up to Max Cencic’s performance on the recording I own. As the slimy Gernando, Tom Scott-Cowell didn’t have much strength in his lower register but showed some real promise in his higher notes, with a rounded and lucid tone. Interestingly, he has the same kind of voice type as Xavier Sabata, who takes the role on the CD. Where I think Scott-Cowell could have been stronger was in his acting. His Gernando was a one-note performance: a drugged-up weirdo who grinned and ogled Rosimonda even as she detailed all the ways he didn’t have a chance with her. A bit more complexity might have made him a more worthy villain.

Julien van Mellaerts was a solid Gustavo, with Harry Thatcher providing a suitably menacing presence as Teobaldo (interestingly, this general is a baritone rather than the usual alto). As Adolfo, Louise Fuller had to tackle the usual dearth of good music for the terzo uomo and suffered a bit from the swamping of the orchestra, while Eleanor Sanderson-Nash was a sprightly, endearingly geeky Childerico.

So it’s wasn’t exactly love at first sight. Still, it was a clever and very effective concept, and I especially liked the final scene with its undermining of the happy, noble lieto fine for all. The singing was generally good, promising lots of talent to come even if there’s still a bit of work to do (I’m especially looking out for Manford and Tymms). I’m all for resurrecting Handel rarities and I applaud the Royal College for having a go at such a challenging opera, even if it’s hard to shake the feeling that Handel saved most of the good tunes for Xerxes.

If you’d like to tackle this opera for yourself, there are currently three available recordings. The world premiere recording in 1996 was conducted by Rudolf Palmer with D’Anna Fortunato as Faramondo, Julianne Baird as Clothilde and Drew Minter as Gernando. In 2007, Diego Fasolis and I Barocchisti added their own take on things, with a cast to make any countertenor fan’s knees go weak: Max Cencic as Faramondo, Xavier Sabata as Gernardo and no less than Philippe Jaroussky as Adolfo. Finally, there’s the 2015 release of the production from the 2014 Gottingen Festival, with Emily Fons as Faramondo, Anna Devin as Clotilde and Christopher Lowrey as Gernando: a potentially very interesting younger cast. Of the three, I know and am fond of the 2007 disc but in due course will probably get round to the others.

Another lesser-known Handel will be coming up on Tuesday, as Opera Settenceto tackle the pasticcio Ormisda and take us back in time for love and intrigue in Ancient Persia.

Find out more about the London Handel Festival

Please note that all images in this post show the other cast, not the singers discussed here.