Many of the films and books tackled as part of my ‘wider world awareness’ project have thrown a pretty grim light on being a woman in other cultures, so I was thrilled to find this magnificent documentary about a very feisty 13-year-old girl in Mongolia. Aisholpan has grown up in a nomadic tradition where the grown men of a family hunt with golden eagles in order to feed their families. Her beloved father and grandfather are both celebrated hunters and she has longed to join them since she was a little girl. There’s just one problem. Female eagle hunters aren’t exactly common, let alone when they’re barely into their teens. And so Aisholpan and her father set out to prove, to the Mongolian eagle-hunting community, that anything a man can do, a girl can match.

Watching this documentary, you’d be tempted to think that bits of it have been staged for dramatic effect (indeed, many critics have claimed that it feels too good to be true). The director Otto Bell, however, insists that it isn’t a dramatic reconstruction. Certainly, it’s shrewdly edited to make it into an exciting and rewarding story, but Bell stresses that it wasn’t scripted and that he simply filmed what happened. (Aisholpan has said the same in her own interviews.) I choose to give it the benefit of the doubt, because it’s a fantastic story and it seems to be as faithful to to the truth as any documentary can be. It presents an insight into an ancient way of life, but also shows (refreshingly) that the West doesn’t have a monopoly on female emancipation and strong-spirited young women.

Aisholpan’s family are of Kazakh extraction but they live in western Mongolia, spending the summers in their gers (yurts) and their winters in permanent but modest houses at the edge of their hunting grounds. For twelve generations, passed down from father to son, the men have been eagle hunters and Aisholpan’s own father is a twice-decorated champion of the art. There are three children: Aisholpan and her little sister and brother, all of whom go to school in the nearest town. That’s far enough away from home that they board during the week in the school’s dormitory. Here they have a close-knit band of friends who’ve boarded together for years, but even so Aisholpan looks forward to going home every Friday, because then she can spend time with her father and his eagle.

Aisholpan and her father with their eagles and their dauntless, sturdy little steppe-ponies

I was trying to figure out what religion Aisholpan and her family followed and, based on what I could understand of their prayers, I think they must be Muslim. And yet they don’t follow the hard, restrictive interpretation of the faith that I’m familiar with from films about Afghanistan or Turkey or Iran. On the contrary, Aisholpan’s father is her stalwart supporter: he clearly adores his bright, vivacious daughter and teaches her how to handle his own eagle before judging her ready to go out and catch her own. For her own part, Aisholpan’s mother is proud of her courageous eldest child. In one rather poignant moment, she notes that Aisholpan’s love of hunting means that she spends a lot of time out with her father and so there isn’t much time for mother-daughter bonding, but she doesn’t mind: ‘I just want my daughter to love her life’. A large part of the film’s appeal comes from seeing such a close-knit, loving and supportive family.

Aisholpan had already started her training before Otto Bell and his team arrived to film her but, on their first day on location, she was due to catch her own eaglet – a great occasion in any eagle hunter’s life. In a breathtaking sequence (not staged, Bell has insisted, simply shot from various angles with the intensity of a crew who have no hope of a second take), we watch her efforts. Her father, hiding his anxiety, ties a rope to his daughter’s waist and lowers her over the edge of a cliff: a rather fraught moment for all involved, surely. Yet she’s been well taught and, after successfully capturing her eagle, we watch her begin to train it, bonding with it, until she has built up the necessary rapport. She has motivation to work quickly: in October, the region holds its annual eagle-hunting competition, drawing competitors and tourists from far and wide.

This year, Aisholpan is determined to compete. And so off she goes, with her endlessly supportive father, to try her hand in a contest which has never seen a female competitor before. Her initial reception is mixed. Not everyone agrees that girls should be allowed to hunt with eagles, of course, and the documentary includes interviews with various disapproving older men who give various reasons why women are unsuited to such a pursuit. In any community, however, there are people resistant to change, and it’s worth noting that the same conservatism isn’t in evidence among the spectators at the contest, where Aisholpan is welcomed as a quirky anomaly (even before she competes).

Just another teenage girl: Aisholpan’s friends from her dormitory at school

Everything about the film is wonderful. Aisholpan herself is lovely, her round, wind-stung cheeks making her look younger than her years, but her steely resolve already that of a mature woman. To Western eyes her way of life is very simple, but there’s no hint that we’re meant to pity her condition. On the contrary, she has freedom, she has plenty to eat, a good education and a loving family, and access to her greatest dream. What could make a child richer than that? And the landscapes in which she lives are splendid. Awe-inspiring mountains and vast sweeps of snow-covered steppe are shown in all their grandeur by Bell and his team, emphasising the natural beauty of this remote corner of the world. As I streamed this on Amazon, there weren’t any special features, but I’d be tempted to buy the Blu-Ray if there was a making-of featurette. This is one film where you really want to know more about how it was put together.

As I read in the interview, some of the profits from the film have been put into trust for Aisholpan’s future studies (she wants to become a doctor) and Bell has done everything possible to benefit her and her family – which is good to know. They even flew over for the film’s premiere at the Sundance festival, complete with their traditional Kazakh eagle hunter’s finery and two eagles to boot. There are some fantastic red-carpet images if you want to search for them. The phrase ‘life-affirming’ is overused nowadays, but this is one case where it’s truly appropriate. Practical, determined and committed to following her dreams, Aisholpan is surely a more inspirational role model for young girls than any Disney princess. Very highly recommended for some feel-good, educational escapism – and as a starting point for research into other eagle huntresses.

Aisholpan aged 13 at home in Mongolia 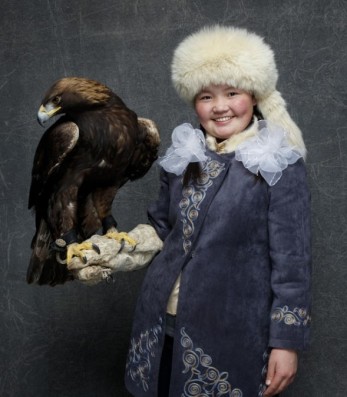 Aisholpan, aged 15, with her eagle at a screening of the finished film