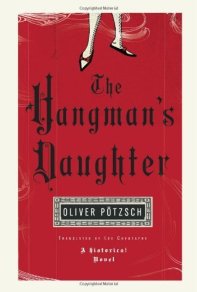 The Hangman’s Daughter: Book I

There’s an amusing story about a time, some years ago, when I decided to read The Hangman’s Daughter. It had recently come out and I’d heard good reviews, so I trotted off to the library and borrowed it. I did my best to get into it, but it was rather staid and old-fashioned and I really wasn’t impressed. Then I realised what had happened. I’d taken out The Monk and the Hangman’s Daughter by Ambrose Bierce. Having now, finally, found the right novel, I enjoyed this tale of small-town life and witchcraft in 17th-century Germany, although I’d have liked it even more if it were a bit more streamlined.

Jakob Kuisl is the hangman in the little Bavarian town of Schongau. Shunned by his superstitious neighbours, he’s nevertheless a key figure in the community and has made a comfortable living for himself, his wife Anna Maria and their three children. He has turned his trade into an art, learning along the way about potions that can alleviate the suffering of those he has to put to death, and studying new and challenging works about the human body. By the same token, this knowledge has made him an accomplished healer and many of his neighbours would rather risk the bad luck of visiting the hangman, than give themselves up to the leeching and bleeding of traditional physicians.

Not all physicians are bad though. Simon Fronwieser, the university-educated son of the town’s doctor, longs to move beyond the treatments advocated by old men who are stuck in the past. He has become a frequent visitor to the hangman’s house, drawn by his fine collection of anatomical books and for Kuisl’s gruff, nonjudgmental company. And perhaps for one other reason… For Simon is helplessly in love with Kuisl’s eldest daughter, Magdalena, who has inherited her father’s medicinal gifts but who has the helpful added virtue of striking, dark-eyed beauty. It’s a match that neither of their fathers will countenance, and which would cause scandal in the town, but Simon just can’t keep away; and Magdalena, for her part, isn’t discouraging him.

When a dying child is found in the nearby river Lech, with stab wounds across his body and a strange mark etched on his shoulder, the townspeople immediately cry witchcraft. Fear and superstition spiral out of control and, swept along on a tide of vengeance, a mob descends on the house of the midwife and herbalist Martha Stechlin. In this period, a woman who cures ailments, lives alone and deals with that limbo of childbirth, in which mothers and babies so often die, is an obvious candidate for a witch. With Martha in prison, and the city council eager to secure a conviction and execution, Kuisl is troubled. He doesn’t believe that Martha is capable of murdering a child. But who else could have done it? Then, as Martha lingers behind bars, a second child dies. The devil, it seems, is loose in Schongau; and Kuisl decides to track him down before popular hysteria forces him to torture and kill an innocent woman.

This is a good story, satisfyingly meaty and with an engaging investigative duo in the form of Kuisl and Simon, with Magdalena making up an occasional third. I thought it gave a very real depiction of what small-town life must have been like at this time – the petty feuds and grudges that could escalate into accusations; and the heartache of condemning and executing someone you’ve known all your life. It also has its fair share of melodrama and adventure: if a film hasn’t yet been made, I’m sure it soon will be. Yet it didn’t completely absorb me, and I don’t know if that’s down to the original or to the translation. The latter, by Lee Chadeayne, is certainly responsible for the scattered modern expressions which jar against the historical setting. But the story is also often repetitious. We are frequently reminded who people are or what they’re like (sometimes in the same words, so you wonder if one of the descriptions should have been taken out): some secondary characters don’t make it much beyond the level of caricature. And there were some sections that I thought a good editor could have trimmed so that the pace didn’t slacken as we moved into the last third. I liked it; but I didn’t love it.

Perhaps the stories get into their stride later in the series. I certainly haven’t been put off trying the next in the sequence. And I’m intrigued by the fact that Pötzsch’s characters are actually his own ancestors: he’s descended from the Kuisl family, and so Jakob, Anna Maria, Magdalena and the others were all real people. Other characters are fictional, but it’s nevertheless an original and impressive way to approach one’s family history. What do you think? Have you read any of these books and, if so, which is your favourite?