In Mumbai, office workers don’t pop round to their local Pret at lunchtime. Instead, they benefit from the astonishing system of dabbawalas, 4,000 of whom collect and deliver 160,000 packed lunches every day through the bustling city. The lunchboxes are carried by bike and train into the centre of Bombay and delivered promptly to the workers’ desks just in time for the lunch break; then, after lunch, the empty tins are packed away and carried home again. Stay-at-home housewives take pride in sending off a home-cooked lunch for their children or husbands; while even unmarried office workers receive lunchboxes courtesy of services offered by local restaurants. It’s like clockwork. The dabbawalas don’t make mistakes. But this charming little film imagines what might happen if they did – and if that mistake accidentally brought two lonely people together.

In the years since their marriage, Ila (Nimrat Kaur) and her husband Rajeev (Nakul Vaid) have drifted apart. He works long hours and, even when he is at home, he’s either in front of the TV or checking his phone. Ila does her best, dressing in flattering clothes and preparing mouthwatering lunchboxes for him, with plenty of input from Auntie, the old lady upstairs (whom we never actually see; she’s voiced by Bharti Achrekar). But none of it has any effect. Rajeev doesn’t even finish the lunches Ila painstakingly makes for him.

But then, one day, the lunchbox comes home licked clean. Ila’s heart leaps for joy. He’s liked it! He actually liked it! Hoping that this signals a renewal of their intimacy, she eagerly waits for Rajeev to come home. But, when he does, he hardly says a word and, when Ila presses him about his lunch, she realises from his answers that there has been a mistake. Rajeev didn’t receive the lunch she made, but another one. Her own carefully-prepared lunch went to someone else. Someone who enjoyed it. But who?

Ila (Nimrat Kaur) studies a reply sent in the lunchbox

Saajan Fernandes (Irrfan Khan) is a curmudgeonly wage-slave whose day is spent poring over forms in his company’s claims department. After 35 years in the firm, he’s about to retire and the last thing he wants to do during his final month is train up his puppyishly eager successor, the irrepressible Shaikh (Nawazuddin Siddiqui). As a widower, his days are identikit rounds of work, uninspiring lunches delivered by a subscription service, and nights spent smoking on his balcony while watching the cosy conviviality of a family living across the street. His existence is fading into monotony. Then, one day, he receives an unexpectedly delicious lunch carefully packed into its many-tiered dabba or tiffin-box. At first he thinks the restaurant have found a new chef. But then, the next day, another mouthwatering lunch arrives, this time accompanied by a letter from its maker, a young woman named Ila. Saajan, awkwardly, writes back. And so, over time, these two mismatched people develop a correspondence which gives them both something to look forward to: a chance to share their innermost feelings, and nourish new hope.

When I think of Indian cinema, I think of Bollywood and dancing and kitsch storylines, but this isn’t like that at all. It’s a beautifully observed, low key story, which is shelved as romance but is both less and more than that. It’s about the shock of finding a soul which speaks to your own; about the pain of realising that your life hasn’t quite turned out how it meant to be; and about the inspiration to challenge that, and take control. 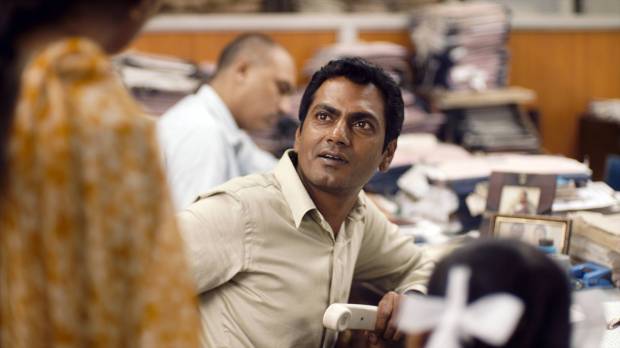 In some ways, this is a chamber piece for three actors: it would work perfectly well with Ila, Saajan and Shaikh alone on a stage. But the dramatic charm of the piece is set off very well by its exuberant setting in Mumbai’s traffic-choked streets, regimented offices and high-rise apartments. The director Ritesh Batra (who also wrote the screenplay) conjures up a wonderfully vivid picture of this tumultuous, good-natured city and keeps the pacing absolutely right, all the way to the (infuriating) ending.

With fine, nuanced performances from all the cast, this is thoroughly recommended for a heartwarming, but not remotely saccharine couple of hours. The language shifts from Hindi to English and back again, so I’ve been tuning in my ear to the Indian accent and admiring the casually bilingual cast. If nothing else, you’ll come away with a healthy admiration for the dabbawalas’ extraordinary organisation and, if you’re anything like me, a craving for lovely Indian food. This would be a perfect film for a takeaway curry. So, seek it out, enjoy and, if you fancy learning more about the dabbawala system, take a look at this article from The Guardian. They sent one of their reporters to Mumbai back in 2002 to follow some of the precious lunchboxes on their daily adventures. 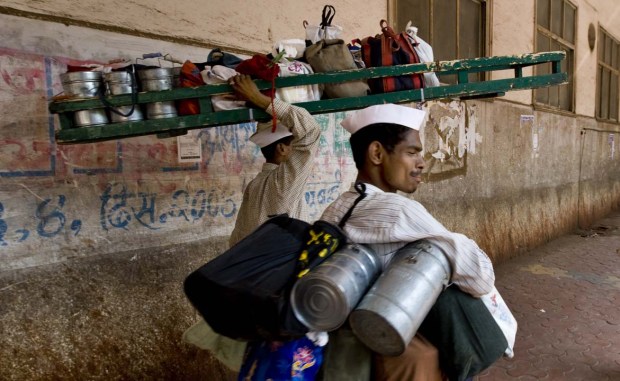 A journalist’s photograph of dabbawalas at work in Mumbai