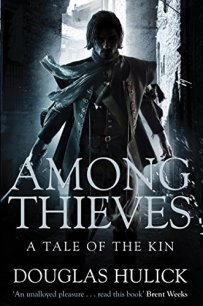 A Tale of the Kin: Book I

I hadn’t heard of either the author or the series when I stumbled across this book, but I just couldn’t resist the cover. It’s designed by Larry Rostant, an artist whose work is often informed by some form of historical costume, and which always catches my eye. A brief flick through the novel convinced me it was worth a punt. And it’s been such a delight to read. Full of spies, crime lords, twisted emperors and swashbucklers, it takes you deep into the seething heart of the city of Ildrecca: the kind of place you might come across Locke Lamora having a drink with Don Corleone, Captain Alatriste and Sam Vimes. Best described as historical urban fantasy, it’s a tale of deals and double-crossing, spiced with the smallest hint of magic, and it’s enormous fun.

Drothe is an intelligencer, known in the cant of the streets as a Nose. It’s his job to keep an eye on his chief Nicco’s territory: to listen out for rumours about what’s going down and who’s playing false; to preempt any muscling in from the gang bosses of nearby cordons; and to maintain his network of spies. This keeps him busy, but not so busy that he can’t pursue a few little leads on his own. And this is why, as the book opens, we find him trying to get some information about a missing relic. As the trail of the relic leads into the lawless cordon of Ten Ways, and to a man who inconveniently turns out to be dead just before Drothe is meant to kill him, Drothe realises that he might have bitten off slightly more than he can chew. Something big is simmering in the Ildrecca underworld and someone’s plotting to ignite a gang war between Nicco and his great rival Kells. But how does all this fit in with Drothe’s relic? And why are some very frightening people hell-bent on tracking down a mysterious book?

When you start reading Among Thieves, you haven’t got a clue what’s going on. Hulick doesn’t pander to you at all, simply drops you into Drothe’s busy world which brims with cant, slang and backstory. The world-building is so complex that, at times, I had to check that I hadn’t come into a series halfway through. Here is a corrupt emperor who has split his soul into three reincarnating parts to ensure that his reign never ends. There are Angels, although it’s never fully explained what they are and whether they’re real or simply an article of faith. Drothe’s childhood with his enigmatic stepfather Sebastian seems worthy of a prequel novel on its own, while his sister Christiana – ex-courtesan, former baroness and currently a wealthy widow – clearly has a lot of fascinating stories in her own past. And then there are the degans: the fearsome cadre of swordsmen whose secretive Order is bound up with Oaths and obligations, and one of whom – Bronze Degan – just happens to be Drothe’s loyal and mildly long-suffering best friend.

You just have to leap in and hope that something will cushion your fall (probably, knowing Hulick, a convenient canopy followed by a pile of rubbish). It isn’t conventional high fantasy, which suits me fine: though there are elements of magic and the supernatural, it all comes across as slightly grubby, worn and everyday. Despite its magical elements, the story has a very down-to-earth feel: it focuses on Drothe’s own adventures without falling into the frequent fantasy trap of Dark Lords and Embodiments of Ancient Prophecies and so forth. It’s just a jolly good, occasionally rather dark, romp. The first-person narration works perfectly: I always appreciate good banter between characters, and Drothe and Degan genuinely do feel as if they’ve been knocking around with each other for years. Degan himself has a pitch-perfect narrative voice, sardonic, smart and very conversational, almost as if he’s relating the story aloud.

And the swashbuckling! A few pages of flashing blades and dashing ripostes always warm the cockles of my susceptible little heart, and Hulick writes it very well. Some of the skirmishes are positively cinematic (i.e. anything with Degan casually showing off his swordsmanship). It turns out that both Hulick and his wife are fencers and his writing obviously benefits from a deep knowledge of the art, making his fight scenes intense and thrilling without weighing them down with technical detail. There are swords, poisoned daggers, knotted ropes, cloaks wound round forearms, and all sorts of delicious skulduggery in a 17th-century mode. As I said: great fun, and highly readable.

It seems that only one more book in the series has been released so far, and perhaps that’s all we’re going to get (which is a shame, because I think I could easily fall in love with this world); but I’ll look out for Sworn in Steel. Hopefully there’ll be much more swagger and flair, and I’m keen to spend more time in the company of both our heroes (without Degan, Drothe’s tale wouldn’t be half so fun). Highly recommended for a light but gripping fantasy read for summer travelling – and especially urged on those who’ve enjoyed Scott Lynch‘s, Joe Abercrombie‘s, K.J. Parker‘s or Anna Smith Spark‘s novels.