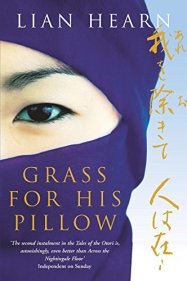 Tales of the Otori: Book II

After an unconscionable delay of more than a year, I’ve finally got round to reading the second book in this appealing Japanese historical fantasy series. While I didn’t enjoy it quite as much as the first one, this was due to the typical problems facing the middle book of a trilogy. The characters have been separated: the grand opening salvo has already been made; and I presume that Hearn has saved all the set-piece battles for the final novel. Instead, we follow the young lovers Takeo and Kaede on their diverging paths, as Kaede learns to make her way in a male-dominated world, and Takeo seeks to hone his supernatural powers under the guidance of the Tribe.

By the end of the first novel, all certainties had been stripped away; and do beware if you haven’t read it, because there will be spoilers ahead. With the death of Takeo’s adoptive father Shigeru, and the subsequent death of Shigeru’s murderer Iida, the delicate power balance crumbles into chaos. Kaede finds herself free once again and, hoping to evade any further arranged marriages, retreats to her father’s lands at Shirakawa, where she receives a welcome best described as frosty from her overbearing father. But Kaede has not spent years among courtiers in vain. With the example of strong, independent women fresh in her mind – she is the named heir of her cousin Lady Maruyama, after all – Kaede resolves not to be cowed by ignorant old men. Instead, she begins to take the reins of governance into her own hands, determined to restore the prosperity of her family’s land, but she will find it a harder battle than she expects. I found her storyline the most compelling in the book, as she struggles to assert herself and to forge her own path in a world that has little time for liberated women.

While Kaede rolls up her sleeves, Takeo has finally been tracked down by his father’s people, the Tribe, who are determined not let his rare talents escape their control. For his own part, Takeo is tantalised by the thought of learning more about his abilities, and follows a group of the Tribe across country, learning from them but also suffering their jealousy at his privileged position. Indeed, the book’s title gives us a hint that our hero won’t be lazing around comfortably in feather beds and warm baths. The ‘journey’ element is pretty standard in middle books, but I felt ever so slightly as though this one lacked a clear sense of purpose. Takeo has lost some of the honed clarity that he demonstrated in the first book and, although his sections are in first person (and Kaede’s in third), I found little to grab me this time round. He simply seems to be treading water for much of the book, until he takes a major decision which shows that he plans to make his own future. To some extent, then, his arc echoes Kaede, with both young people growing up and learning the scope (and limits) of their own strength.

However, where I had a clear, vivid sense of Kaede’s interactions with others, there’s little sense of Takeo’s interpersonal relationships. His interactions with lovers, supporters like Jo-An, or friends like Makoto, seem to skate on the surface of engagement. I didn’t feel the emotional connection that I felt sure should be there when Takeo spoke to these people. Instead he feels as if he’s going through conversations with them on autopilot, saying the right thing, but not really meaning it from the heart. He’s rather like the kind of person you meet at a party who keeps looking over your shoulder when you talk to them. It’s as if Takeo knows that he’s the main character and he’s only killing time with these secondary characters until the real story starts up again. So, from that point of view, his sections weren’t as successful for me as they could have been.

Nevertheless, I will continue to the final volume. I enjoy Hearn’s graceful world and I’m pleased that her two main characters are refusing to conform wholly to the stereotypes of ‘beautiful noble lady’ and ‘supernaturally gifted ninja’. There are points, especially in the handling of the romance, where the young-adult nature of the series shows through, but for the most part it’s an absorbing story set in an compelling semi-historical context. Now that the pieces are ranged on the board, I think things will pick up pretty quickly in the third and final volume, and I look forward to finding out how the characters succeed – or fail – in their struggle against those who hope to constrain them.

Has anyone else read this series? If so, what did you make of the rhythm of this second book compared to the first? And do you think I’m being too hard on Takeo?

Last in the series – Across the Nightingale Floor