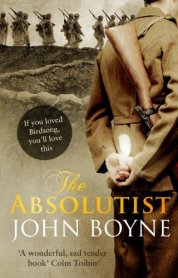 It is 1919 and Tristan Sadler arrives in Norwich to meet Marian Bancroft, the sister of his friend and comrade Will Bancroft. Tristan has come to return the letters Marian wrote to her brother, which he has kept ever since Will’s death. And yet he hasn’t made this journey solely for the sake of restoring a piece of her family history. There are things Tristan needs to say; amends he needs to make. Will Bancroft didn’t die in action, but was shot by a firing squad of his own peers, hauled up on charges of cowardice after proclaiming himself an ‘absolutist’ – the firmest kind of conscientious objector. Tristan needs to tell Marian that her brother wasn’t a coward; but he also hopes, in meeting her, to find some closure for his own traumatic experiences on the Western Front.

I haven’t read anything by John Boyne before, although The Boy in the Striped Pyjamas is something I’ve always felt that I should read (it’s very difficult, though, to find a mood in which one’s ready to read about children suffering in the Holocaust). It just so happened that I came across The Absolutist in Oxfam the other day, and it promised a story similar in spirit to that of Helen Dunmore’s The Lie, which I found very poignant. Like that, The Absolutist isn’t about war as strategy or politics, but about the conflict’s human face: its psychological cost; its senselessness; and the intense friendships formed in its shadow.

When Tristan arrives at Aldershot training camp in April 1916, he finds himself one of a band of enthusiatic, immature boys for whom the Great War is an awfully big adventure. Only one of their group dares express a different opinion: Wolf, a conscientious objector, who has been sent to Aldershot while the military tribunal reviews his case. Immediately reviled by the troop’s sadistic Sergeant Clayton, Wolf becomes the scapegoat for his peers – the one who is always given the worst chores, humiliated and mocked. Tristan, keen not to stand out himself, joins the disapproval – but his dislike of Wolf has an added charge; for Wolf proves to be fascinating to Will Bancroft, a young man with whom Tristan has struck up a close friendship.

As the book is told from Tristan’s perspective, we watch his growing confusion over what Will might want from him, and the emotional tangle caused by the hothouse atmosphere of an army camp. Tristan himself, it transpires, isn’t an entirely objective narrator, and this is what makes the story ultimately even more tragic. As Aldershot gives way to the trenches of France and these boys – immature, half-trained and frightened – are confronted with enemy machine-guns, Tristan struggles to make sense of the world. Boyne is very good at conveying the insanity of life on the front line: the irrationality of sending waves of young men over the top; the irony of ordering conscientious objectors out into no-man’s-land as stretcher-bearers – essentially a cheap and quick form of execution by enemy fire; and the fracturing sanity of men and officers. There are echoes not only of Birdsong but also of Pat Barker’s Regeneration books. This is a world not so very far divorced from ours, but which seems incomprehensible.

There are lots of questions which arise from the novel, none of which are answered by Boyne, and which challenge us to think not only about modern perspectives but also about those of the 1910s. For example, what is courage? Is it the readiness to run over the top to meet death in enemy fire? Or is it being prepared to stick to your principles, even though those around you mock and disdain you for them? What is shame? Is it knowing that your relative has betrayed his country by refusing to fight? Is it daring to express feelings which are violently rejected? Is it acting from spite or fury, rather than love? And of course, what is love? And what can be permitted to be love? Tristan’s world, as we see from the very beginning, is one in which love is only allowed to exist in certain forms, and Tristan himself bears this worldview throughout his life. There’s something even more tragic there: that those who came home from the war could never really move beyond it. As Tristan notes, at one point:

The barracks were filled with ghosts … It was as if we died before we left England … There were twenty of us in my barracks, you see. Twenty boys. And only two came back. One who went mad, and myself. But that doesn’t mean we survived it. I don’t think I did survive it. I may not be buried in a French field but I linger there. My spirit does anyway. I think I’m just breathing, that’s all. And there’s a difference between breathing and being alive.

Boyne avoids the temptation to make Tristan too sympathetic. I wouldn’t say he’s an untrustworthy narrator, but he sees what he wants to see, and I wonder how different the story would have been from Will’s perspective. Indeed, Tristan’s decision to meet Marian is double-edged: he wants to give her the letters, but also wants absolution from someone, and the cost of that absolution will ruin both his own life and Marian’s. In that sense, I was strongly reminded of a film I’ve recently watched called Frantz, which has a similar theme of attempted reconciliation after the First World War. Simple, thoughtful and powerful, it haunts the mind.

It’s odd that the First World War still exercises such command over our imaginations. For those of my generation, it’s already lost in the mists of history. If any of our relations fought in it, they would have been of our great-grandparents’ generation (two of my great-great-uncles died on the Western Front). And yet film, literature and popular culture makes this war feel much closer to us than more recent conflicts. That tragic loss of young manhood – a whole generation wiped out in Germany, France and England – still resonates with us today. Boyne’s story shows us how the world was changed by that mass slaughter on the battlefields of Europe: how accusations of cowardice could taint a whole family; the debilitating guilt of the survivors; and the fact that none of those involved could ever, truly, leave the fields of France behind.

I’ll have to read more of Boyne’s books. I’m tempted by his Mutiny on the Bounty, The Thief of Time and The House of Special Purpose. Does anyone have any other suggestions?