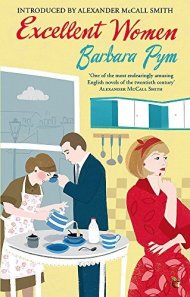 This is the first book I’ve ever read by Barbara Pym and now I’m wondering how on earth I managed to avoid her for so long. First published in 1952, Excellent Women is a comedy of manners set in contemporary London, in a community based around the local church. At its heart is Mildred Lathbury, orphaned clergyman’s daughter and self-professed spinster: one of those ‘excellent women’ who can be relied upon to keep the parish running, join in with the flower rota and man the stalls at the church fair. Mildred’s world has the stifling cosiness of a small village, where everyone knows one another’s business and gossip greases the cogs of life. But around her, the world is changing. When a young couple moves into the flat below Mildred’s, she finds herself unwillingly dragged into their vibrant, unconventional, and entirely shocking lives.

I suppose an unmarried woman just over thirty, who lives alone and has no apparent ties, must expect to find herself involved or interested in other people’s business, and if she is also a clergyman’s daughter then one might really say that there is no hope for her.

Mildred Lathbury has no illusions about her place in the world and says so, repeatedly and with the firmness that suggests borderline desperation. Her clerical girlhood has trained her to cope with any eventuality that might arise within the bounds of a parish and, even after moving to London, her chosen life reflects the introversion of a country village. She devotes herself to the local church (which she calls ‘Anglo-Catholic’; I imagine I’d call it ‘High Church’), along with a squad of other single ladies of a certain age. This army keeps things ticking, polishing the brasses, arranging the flowers and keeping an eye on the dynamic young priest, Father Julian Malory. Father Julian is not married (though he could if he wanted to) and instead lives with his sister Winifred in the vicarage. They are long-standing friends of Mildred’s and there’s a widespread expectation among the ‘excellent women’ of the parish that Mildred and Julian will one day accept destiny and get married. But it looks as if things aren’t to be.

When the Napiers move into the neighbouring flat, Mildred’s comfy assumptions are shaken to the core. Hers is a world where a woman’s duty is to make a loving nest for a man: where meals are on the table, the washing-up is done and the wife waits with baited breath and shining eyes for her husband to return each evening. She knows, with all the conviction of a single woman, what marriage should be like. And the Napiers utterly destroy that. Helena Napier, glamorous and chilly, is an anthropologist, more interested in matrilineal kin-groups in remote tribes than in keeping house for her husband. For his part, Rockingham (‘Rocky’) Napier is an ex-naval officer who has spent the war charming Wren officers in Italy. Louche, dashing and effortlessly charming, he makes immediate inroads into Mildred’s heart, especially because his own wife seems so indifferent to him. She’s much more interested, it seems, in her colleague Everard Bone, a cold and rather disdainful man who turns out, to Mildred’s annoyance, to attend the church where she goes for lunchtime services during her day-job assisting distressed gentlewomen. What is Mildred to do with this awkward love triangle?

Most of the book’s amusement comes from the culture clash between Mildred’s prim, old-fashioned ideas and the independent professional life that Helena Napier has built for herself. Mildred is a very deftly-written character, avowedly content with her little life and yet – just sometimes – troubled by doubt. She knows that she’s regarded as capable and reliable, but sometimes it saddens her a little bit. ‘Virtue is an excellent thing,‘ she says mournfully at one point, ‘and we should all strive after it, but it can sometimes be a little depressing‘. With a ringside seat for the drama of the Napiers’ tumultuous relationship, Mildred is about to glimpse a world that is not her own, and it raises mixed emotions. She tries to maintain enthusiasm for her world of church and duty, but you sometimes get the feeling that she’s protesting just a bit too much.

Similarly, Mildred isn’t quite the virtuous, self-effacing vision of compassion that she’d like to be. There’s just a little bit of inner snark that sometimes, despite her best efforts, breaks free. While she’s friends with Winifred Malory, she can’t help little digs at her:

She was of a romantic, melancholy nature, apt to imagine herself in situations. She kept by her bed a volume of Christina Rossetti’s poems bound in limp green suede, though she had not, as far as I knew, had the experience to make those much-quoted poems appropriate.

The really wonderful thing about Pym is how she delves beneath the surface of this kind of society, showing us the petty hierarchies and suppressed grudges that power such a small and enclosed community. I can’t say that I ever knew anyone quite like Mildred when I was growing up in my little village, but I saw exactly the same kind of subtle jockeying for position among the ladies who helped in the church on the flower rota and so forth (and, of course, on the village fete committee). This is a world that I almost recognise, a world that was old-fashioned thirty years before I was born, and there’s a nostalgic delight in watching Mildred negotiate a life which suddenly, bewilderingly, seems to be opening out. Rather like a Jane Austen heroine, she ends up with multiple discreet suitors where once she had no hope of any (though whether she realises they’re suitors is another matter). Although Pym keeps the result under her hat, I see that she gives it away in some of her other books, and I’m actually rather pleased with the choice.

Deceptively cosy and very amusing (as well as being surprisingly penetrating in a psychological kind of way), this was a thoroughly enjoyable novel. I shall be seeking out more Barbara Pym as soon as possible and would urge you to do the same, especially if you’ve enjoyed things like the Diary of a Provincial Lady, Greenery Street or any kind of Persephone book. Do you have any particular favourites that you’d recommend?

I leave you with the alarming consequences that result from a rare slip into pique on Mildred’s part, at a church meeting where tea is – almost ritually – once again offered. Mildred makes the shattering mistake of asking if tea is really necessary:

‘Do we need tea?’ … She sounded puzzled and distressed and I began to realise that my question had struck at something deep and fundamental. It was the kind of question that starts a landslide in the mind.

Never, never get between an Englishwoman and her tea.