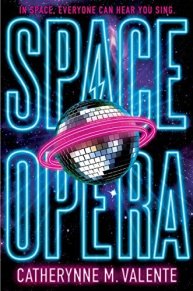 ‘In space, everyone can hear you sing’. That tagline more or less sums up the spirit of this novel. When I said that I was looking forward to reading more of Catherynne M. Valente’s work, I wasn’t expecting anything quite like this. I don’t even know if I can conjure up its atmosphere for you. Imagine if Terry Pratchett and Douglas Adams got together, drank a bottle of gin, smoked something illegal, watched Velvet Goldmine, and then decided to write an intergalactic, sequin-drenched skit on the Eurovision Song Contest. And turned it up to eleven. It’s mad. No, it’s more than that: it’s exuberantly, gleefully insane. Its labyrinthine sentences spill over the pages like a Victorian lady bursting from a corset several sizes too small. But perhaps the biggest surprise is its humour: an anarchist, deliberately absurdist brand which feels very, very British.

Decibel Jones and the Absolute Zeroes were, briefly, the biggest glam-rock band in existence, but times have moved on, leaving behind them the scurf of unrealised dreams, regrets and sloughed-off sequins. Oort St Ultraviolet, multitalented bassist and former ‘boyfrack’, is now struggling with family life in Cardiff, while lead singer Decibel Jones surveys the ruins of his solo career from a garret in Croydon. As for Mira Wonderful Star, their former drummer… well, they prefer not to talk about Mira any more. In fact, they don’t talk full stop. But fate is about to intervene.

You see, this is a novel of first contact. And that contact comes not via flying saucer or almond-eyed aliens, but via a self-replicating seven-foot-tall blue creature not dissimilar from a flamingo or Looney Tunes’s Road Runner. This alien, an Esca, has come to tell the people of Earth that they’ve been weighed, measured and found wanting. But there is good news! Rather than being immediately wiped out by the wider, more advanced forces of the universe, they’re going to have a chance to prove that they are sentient beings. To do so, they must field a band to compete at the one hundredth Metagalactic Grand Prix, a song contest formed to foster community spirit in the aftermath of the debilitating Sentience Wars. Coming last will result in the immediate extinction of the human species, but placing higher than last will mean being welcomed into the fellowship of sentient beings across the universe. The Esca want to help. In fact, they’ve even drawn up a shortlist of bands they think would do rather well. And, for reasons that no one completely understands – least of all a former rock god nursing a hangover in Croydon – Decibel Jones and the Absolute Zeroes are on that list.

As Oort St Ultraviolet and Decibel Jones are carried across hyperspace, in a ship that resembles a floating aquarium more than anything else, they must try to come up with a song that will save the human race from utter extinction. And, to do so, they must overcome years of enmity, Oort’s desire to be normal, Decibel’s inability to be normal, the baffling attentions of a blue space flamingo and an excessively friendly extraterrestrial red panda. But this is nothing compared with their arrival on the host world itself. For what no one has told them is that the contest starts with the semi-finals, where taking out your rivals is a time-honoured strategy for not ending up last… And that’s really all I can do in terms of summarising a book which, all too often, reads like the overexcited love-child of a dictionary and a bestiary. It’s like what would happen if the Restaurant at the End of the Universe played host to the patrons and musicians of the Mos Eisley Cantina. It’s vast and sprawling and mad and glittery and makes no sense.

Now, I have a soft spot for the Eurovision Song Contest. I know that not everyone shares this. And I should add that this doesn’t mean I take it seriously. I find it fascinating from an anthropological viewpoint: this annual pageant, conceived as a way to bring Europe together in peace and what we laughingly call harmony. (It’s been more successful at that than the euro ever was). Obviously, it isn’t as good as it was in the old days – everyone takes it too seriously nowadays and my favourite Eurovision memory is still of Guildo Horn in 1998. Just go watch it. It’s like Eurovision distilled and bottled. Although I think the guiding spirit of Valente’s novel is more in the line of Lordi’s victorious 2006 Hard Rock Hallelujah. If our American cousins ever needed proof that Europeans aren’t suave, sophisticated and chic, there it is, right there. Every year, the Eurovision Final is a chance for me to settle down with some wine and a takeaway, usually in H’s excellent company, and to watch with a sense of steadily spiralling ‘what-the-hell’, as Europe shrugs off its boring workaday suits and comes out in all its glitz.

It feels as if this is by an entirely different author than Deathless. Of course, they’re two very different books. But the darkly sensual atmosphere of Deathless gives way here to an almost hyperactive sensibility, which hops around like a two-year-old let loose in a pool of blue Smarties. It’s fun to read, but not always easy, and I found pretty quickly that it was best just to keep reading and trust that the thicket of words would resolve themselves into a scene. Now, if this were a different kind of book, or if I hadn’t already seen that Valente is a very good writer, I might have been a bit critical about it. I might have seen it as the author trying to do a bit too much. But, given the subject matter, it’s hard to see where one could realistically draw the lines of ‘too much’. And it’s a book that wants to be loved, despite its occasionally baffling incomprehensibility – rather like an overly enthusiastic Labrador who’s polished off a bottle of whisky and rolled in glitter.

I just simply don’t know what else to say. Reading it feels like being steamrollered by an over-sugary piece of candyfloss, decked in multicoloured sprinkles and dotted with pop-culture references. And the fact that I’ve had to resort to so many similes just goes to show how incapable I feel of actually conjuring up this curious bundle of intoxicants for you. All I can do, I think, is just sit back and wait for other people to share their views on this. Just don’t say I didn’t warn you. You’ll either end up shrieking, “This is awesome!” or “What the bloody hell is this?!” Rather like Eurovision, in fact. For those about to rock…