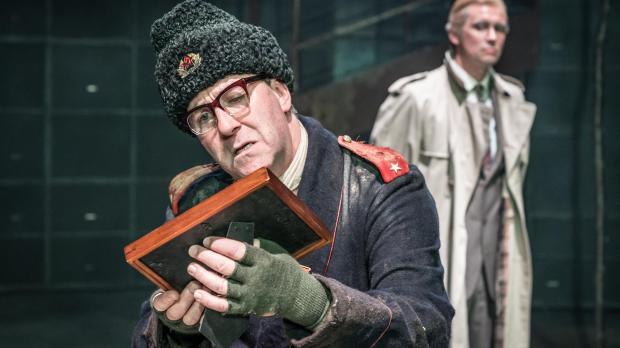 What is truth? Who decides what truth is? Does truth change depending on who is speaking? Can the truth be remade? Can we remake our own truths? And what happens if you dare to articulate a truth that the authorities would prefer not to acknowledge? These are all very timely questions, in a world where truth seems more flexible than ever before, and certain high-profile political figures seem to be confusing ‘true’ with ‘convenient’. Our relationship with the truth is constantly in flux, but this daring and sweeping play by Rajiv Joseph (directed for Hampstead Theatre by Lisa Spirling) points out that it’s far from a contemporary phenomenon. Set in three different periods of modern Russian history, linked by a common thread, Describe the Night focuses on questions of truth, lies, reality, fiction and integrity, and centres on an unexpected figure whose words resonate through history: the writer Isaac Babel.

Describe the Night is not the kind of play I would normally have chosen to see. With its experimental structure, leaping back and forth across time, and its focus on the birth of modern Russia, it wasn’t really in my comfort zone. I tend to stick with safer, cosier, more historical subjects; but my friend Em was rallying a theatre trip and I decided to go along, knowing nothing about the production at all. In many ways, this was the best possible way to approach the play, so if you’re a purist, you might want to stop reading now. I was surprised and delighted to realise that Isaac Babel was a key character: thanks to my love of Puskin Press, his Red Cavalry and Odessa Stories have both been on my wishlist these last few months. Yet I knew nothing about the man himself and, as the play unfolded, was moved by the courage of this writer, who dared to dream at a time when the Soviet Union saw any imaginative enterprise as seditious.

Two young men meet on a dark night in Poland in 1920. They are both in the Russian Red Cavalry. Isaac Babel (Ben Caplan) is a war correspondent, charged with reporting back the deeds of the company to headquarters; but, more importantly, he’s a writer who is struggling to put his experiences into the kind of language suitable for literature. He carries with him a journal, in which he defiantly preserves a more creative approach to the world. The other man, Nikolay Yezhov (David Birrell), is a stout, staunch fellow: the ideal Soviet in the making, who appreciates rules and regulations, and is distrustful (and not a little frightened) of the power of stories. Stories are lies, after all: they create what is not there. In the space of one dark night, the two men try to cross the conceptual boundaries that surround them and develop an enduring friendship. It will last until death, although their relationship is complicated some years later by Babel’s meeting with Yezhov’s beautiful, frustrated wife Yevgenia (Rebecca O’Mara).

In 2010, a car rental clerk in Smolensk is disturbed late at night by someone hammering on his door. It’s a desperate young woman, a journalist, Mariya (Wendy Kweh). She wants a car: she has to get back to Moscow. A plane has just crashed in the forest: a plane that happened to be carrying the entire Polish government, and Mariya’s fellow reporters have been unaccountably rounded up and taken off in a police van. Most of them will later be reported to have been killed in unfortunate incidences of ‘street crime’. Mariya herself is in a panic. The rental clerk, Feliks (Joel MacCormack), is in a state of equal anxiety. He made the mistake of rushing out to see what had caused the huge explosion he saw earlier, and came across a nightmarish scene in the forest – a woman embedded in the ground, still in her aeroplane seat, dying but not quite dead. Before she dies, she gives him a book, an old diary, which Felix now presses on Mariya. He doesn’t know what it is, and that troubles him: all he knows is that the police will come back and, somehow, he knows that he doesn’t want them to find this book here. 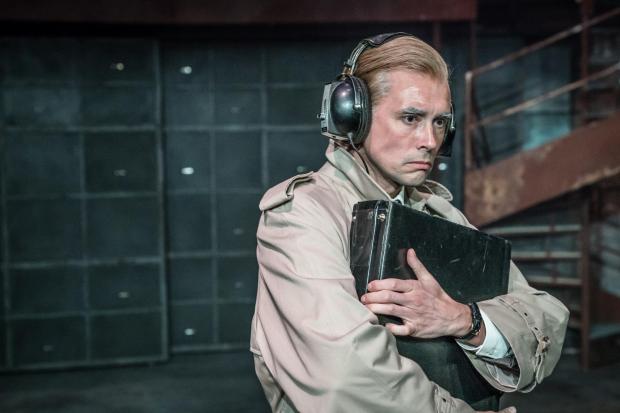 In 1988 in Moscow, the USSR is at its height. Comrade Yezhov has been placed in charge of the NKVD archives, where the truth goes to die. History has been censored, remade, excised, expurgated, redacted, and the missing pieces come here to be neatly filed away. Knowledge is power. And Yehov wields some of the greatest power in Moscow, for with a stroke of his black marker he can change the past. Today, he is inducting a new agent: the ambitious, fresh-faced Vova (Steve John Shepherd). Vova is from Leningrad, a thug, but shrewd with it. He elects to change his past – to scrub out what has been and to write his own history anew. Sensing Vova’s ambition, Yezhov sets him a task to test his mettle: to carry out surveillance on Yezhov’s estranged granddaughter Urzula (Siena Kelly), who lives in Dresden and dreams of escaping to the west. But, in encountering Urzula, who is in fact the granddaughter of Isaac Babel, and who escapes in her mind by reading his diary, Vova will find himself up against the deepest contradictions in his own soul.

For a small theatre space, and a cast of six, this is a massively ambitious play. Yezhov and Yevgenia represent the two constants, ageing and growing younger as we jump across time. That meeting between Babel and Yezhov resonates throughout, as their first conversation about stories and truth broadens into a question that will come to kill thousands of people. Remarkably, Babel, Yezhov and Yevgenia were real people and the programme gives their biographies, making it clear that the play has fictionalised some of their stories in order to make its own truths (ironic, no?).

Vova, too, is a real character: an inscrutable, ruthless KGB agent of mysterious origins who has made and remade his own story, emphasising his impeccable record and his expertise in judo, and who, in the ‘present day’ sections, has risen to become one of the most powerful men in the world. I found it very brave – and perhaps somewhat reckless – to have made him one of the main characters in such a play, but it’s true that freedom relies on being able to tell stories and to hold people to account, to criticise and to question. It’s when we stop feeling able to do that, that our freedom is at its most fragile.

Labyrinthine and allusive, the play sometimes loses its way. At one moment it stumbles into a more magical-realist vein, as Vova is invited to join Urzula and her grandmother Yevgenia for dinner, and personally I didn’t really think this worked or was necessary. The overriding theme of memory was strong enough without needing surreal subplots about leech soup. But this was a rare misstep. For the most part, Describe the Night is troubling, ironic, poignant and sometimes surprisingly funny in all the right ways. It’s the kind of play our world needs right now, when those in power are trying to tell us what it true and what is not true: a fervent, passionate stand in favour of the power of imagination and creativity to reach the deeper truths that live within us, and that politicians can never scour away, no matter how hard they try.

Find out more about Hampstead Theatre