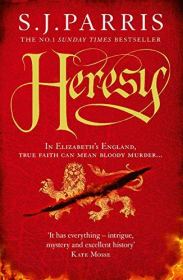 In my first version of this post I made a bit of an idiot of myself by getting S.J. Parris confused with C.J. Sansom and reminiscing happily about her Shardlake books. No doubt many of you wondered what I was on about, but Betty was the one who had the kindness to point out my error to me. Betty, thank you. There will be blessings stored up for you in heaven. My only excuse is that I read the Shardlake books fifteen years ago and obviously get easily confused about authors using their initials. For the record, Parris did not write the Shardlake books, but she certainly has written this series about the Italian scholar and philosopher Giordano Bruno. One of my most powerful memories from my first trip to Rome is of lunch eaten in the Campo dei Fiori, in the shadow of the great brooding statue of Bruno, and I’ve long been keen to learn more about him. Historical fiction was an appealing place to start. Parris’s first novel introduces us to Bruno in his mid-thirties, already hounded across Europe by the Inquisition for his heterodox beliefs. Finding refuge in England in 1583, he accompanies his friend Sir Philip Sidney to Oxford, where he swiftly finds himself caught up in a web of murder, danger and espionage.

Bruno and Sidney met as fellow-students in Padua many years ago. Now they have both become famous – or infamous – Sidney as a poet and courtier; Bruno as an ex-monk who follows the heretical Copernican view of the universe. Yet, in his most private thoughts, Bruno goes even further, believing that the Earth not only revolves around the Sun, but that the Sun is only one of infinite similar stars, each potentially with their own planets. Such a view sounds extremely sensible to us, of course, but it’s the height of heresy in 16th-century Europe, when even the Copernican view can lead to torture. Having spent years evading the Inquisition’s unhealthy interest, Bruno has found sanctuary first at the French court and now in England, where he hopes to find intellectual tolerance.

Unfortunately, such hopes seem destined for disappointment. The great feature of Bruno’s trip to England is a disputation in Oxford with Dr Underhill, the rector of Lincoln College. It’s to be the highlight of a ceremonial visit to the university city by a Polish duke, whose presence is proving somewhat testing to Her Majesty, and who has been placed under the supervision of Sir Philip Sidney. When the little band arrives in Oxford, Bruno ruefully discovers that the scholars are less interested in disputation and more interested in their own reputations and nursing the wounds of years of religious persecution. But then, within the venerable walls of Lincoln College, a Fellow is killed in a shocking fashion which seems to allude to John Foxe’s Book of Martyrs. The anxious Underhill tries to pass it off as an accident, but Bruno knows better: this is murder. But who could want to kill an academic? What secrets are simmering under the surface in this Oxford college? How does it tie in with the reconnaissance he’s meant to be doing for Sidney’s father-in-law, the spymaster Francis Walsingham? And what, if anything, does it all have to do with the rector’s alarmingly pretty and emancipated daughter Sophia?

This was a gripping, highly readable mystery: Parris has certainly done her research and Bruno’s trip to Oxford is attested in the history books, along with his connection with Dr Underhill. Even the flowery opening to his Oxford disputation is taken word-for-word from Bruno’s own writings. But, despite the care for historical fact, it doesn’t overwhelm. This isn’t the kind of meaty historical fiction which draws me deep into its world and which, I have to confess, I often prefer: it has the fast pace of a thriller, and its characters, for all their concerns about recusants and heretics, feel very modern (especially Bruno, whose beliefs – which would cause him such trouble – are common sense today). The final act tips over ever so slightly into melodrama and there’s a sizeable MacGuffin in the form of a lost sixteenth book of a work once owned by Cosimo de’ Medici – but Bruno is an engaging narrator and I’m always diverted by tales of academic rivalry and general skulduggery.

I have the second book, Prophecy, so I’ll be spending some more time with Bruno soon. One day I’ll have to read a proper biography of him so that I can better distinguish fact from fiction. In fact, it’s probably high time for me to gird my loins, challenge my brain and plunge into Frances Yates’s dauntingly erudite Giordano Bruno and the Hermetic Tradition, which has been sitting on my shelves, reproachfully unread, for several years.