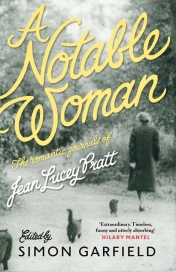 ‘I have decided to write a journal. I mean to go on writing this for years and years, and it’ll be awfully amusing to read over later.’ It was Saturday 18 April 1925 and fifteen-year-old Jean Lucey Pratt was making a start on her first diary. Unlike most teenage girls, she actually kept it up: sixty years later, she’d produced over a million words, encompassing national, local and family politics, her ambitions, the frustrations of being a clever woman in a man’s world, her friendships and, most movingly, her constant desire for love. Simon Garfield, the editor of her journals, came across her work as a participant in the Mass Observation project, which gathered the experiences of ordinary people across the country during and after the Second World War. But Jean’s personal diaries go beyond the social history contained in her consciously ‘public’ journals. Here is an intelligent, smart, hopeful woman, longing to live to her full potential – but also a fallible, flawed human being who makes poor decisions, lacks courage, and manages to have whole love affairs in her imagination with someone she’s never actually spoken to. She is inspiring, exasperating and pitiful by turn: a fully-realised, articulate and hauntingly familiar personality.  There is, I think, a little bit of Jean Lucey Pratt in all of us.

Jean grew up in comfortable circumstances in Wembley, though she lost her mother at a young age and had a complex relationship with her father’s second wife, Ethel. Her older brother Leslie, nicknamed Pooh, spent long periods working abroad, in Brazil, Jamaica and then Suez, although he returned to London on his retirement, bringing Jean the joy of family nearby. After muted successes at school, she entered her father’s architectural practice as a secretary, but dreamed of greater things and eventually persuaded her father to let her study art at UCL, where she fell in with a tribe of passionate, bohemian and eccentric friends who would remain close to her for the rest of their lives. Although Jean initially hoped to revitalise her father’s architectural business, her greatest dream was to write: she believed that she had brilliance within her (which she did, though perhaps not in the way she imagined), and did various placements in the hope of becoming a journalist. Sadly, this never really came to pass. Instead she spent a long period working in marketing and PR at a company which produced aluminium and was responsible for making many of the fighter plane engines used in the War.

Later, after she had moved out to her beloved Wee Cottage in Burnham Beeches at Farnham Common, where she lived the rest of her life, Jean set her heart on becoming an author instead. Her biography of the 18th-century actress Peg Woffington was published to polite acclaim, but her hopes for a historical novel or a novel based on her cats were doomed to disappointment. In a way, her life is fascinating not because she achieved great things but because she dealt with disappointment so gracefully, fighting back as long as she could, with great faith in her own abilities – and a firm belief that her destiny did not lie in the restricted domesticity of a conventional household. She was most unusual in that, for her time, and yet I sometimes wondered if her fierce independence was the result of circumstances – I got the impression that, if Jean had received a proposal, she’d have jumped at it, domesticity or not. For the one thing that Jean really wanted – deeply, desperately – was to be loved. Truly loved.

Love is a theme which underlies Jean’s entire life. From the very first pages of her diary, when she lists her various beaux so far, she is in search of a romantic partner. Yet history wasn’t in Jean’s favour: there were three million ‘surplus women’ in England after the First and Second World Wars, and it wasn’t given to everyone to find a mate. Jean also seems to have rather bad judgement where men were concerned: she’s attracted to adventurers, to married men, to sensitive young men who turn out not to be all that interested in girls. She builds the dream of a future on a glance exchanged by accident with a handsome young man, even when she’s old enough to know better. And yet, as she does grow older, her search for love loses its confident expectation of ‘when’ and becomes ‘if’. That, in itself, is its own tragedy of course. As a young woman, she constantly rails against the belief that a woman should settle into domesticity; by her thirties, she dreams of such domesticity; by her old age, she has found a quiet, peaceful substitute in her own company and her beloved cats.

At 24, she writes: ‘My Easter prayer: that soon, soon my body’s hunger may be satisfied! … All I want is someone reasonably young and healthy and sufficiently in love with me to trust me a little while, and I will make him as happy as is possible‘. A few weeks later, in despair, she adds: ‘It is Spring and there is no one here to make love to me: that is the trouble‘. At 29: ‘I want to fall in love with someone who will fall in love with me. Oh God, is it too late?‘  At 31, she takes a more defiant approach: ”What a pity that there are so many odd men about, their oddities just a bit too much of a barrier to make one want to marry them‘. At 33, in a moment of misery: ‘Your will to love gets pressed down and blacked out… It is a terrible mood: to feel useless, unwanted, unloved.’ At 34, she takes a hard look at her reality versus her plans: ‘As a woman, before anything else I feel I should be married, happily married, with possibly a young family. I have an appalling sense of failure, inferiority and insignificance about this which cuts deeply. It seems that something must be very wrong somewhere that I have failed to attract myself the right mate.‘ Some weeks later, on New Year’s Day 1944, her desperation reaches Biblical levels: ‘Oh fertilise me, fertilise me, God, that thy servant may not die fruitless!’ Yes, that kind of exclamation raises a smile but, although we might not express ourselves in quite the same way now, I think some people (women and men) will understand exactly what Jean feels. And it isn’t sex that she lacks: for all her struggles, Jean manages to fall in with a string of profoundly unsuitable but sexually useful men (after every occasion there is an agonising wait for her period). It’s love that she wants, and I defy anyone to be unmoved at such a simple desire:

And when the Almighty asks me, ‘Well, and what besides yourself did you love on earth?’ I shall answer, ‘My cats and my cottage…’ And if He goes on, ‘And did anyone love you?’ I shall have no answer.

Jean as a schoolgirl

Jean with her niece Babs and her sister-in-law Ivy

There are moments you wish you could give Jean a big bear-hug. Yet she was not alone: in later life she was active in the life of her village, in art classes, on the parish council, and as proprietor of the local bookshop, not to mention as a universally-recognised expert on books about cats. She had friends whom she loved and other friends who occupied a more equivocal place in her feelings (of her tempestuous friend Nockie, she writes at one point, brilliantly: ‘She is almost… like arsenic, needed in very small quantities for medical aids to health, but fatal in large doses’). She had family nearby, although she was often glad to be able to get away from them again. She was a voracious reader: sensitive, thoughtful and politically engaged. And she had her vast throng of cats: a dynasty of feline companions, whose trials and tribulations she faithfully records.

Jean shouldn’t be written off as a woman who mopes about love the whole time. She’s gripping because she gives a vivid picture of what it was like to live during the Second World War, never knowing from one day to the next whether Hitler really was going to invade. She writes of bombs falling near her home and cracking the glass, and of her friends in London leaning out of their windows watching the Blitz, knowing that their own house might be destroyed at any moment, but swept up in a hysterical fatalism. She writes of training as a nurse and the long hours of waiting, just in case; she writes of Dunkirk and D-Day, Chamberlain and Churchill; the Suez crisis and, much later, the election of Margaret Thatcher; yet she has little truck with mainstream politics: ‘I do wish politicians in all parties could admit more freely and openly that they are all fallible and have made mistakes and will make more. To hear them talk before an election you think they were individually suddenly the only people who knew all the answers and had never done anything wrong‘. That was written in 1951, just prior to the election in which the Tories and Churchill returned to power; Jean was, by this date, a committed Liberal. And, lest you need any further proof that nothing ever really changes, I quote this section written in 1940, when Jean was 39, in the depths of the Second World War:

But oh, what is the matter with the people of this world that they have let such governments lead them into this path of destruction? It is surely the fault of the people – me and you – too lazy, too limited, too self-centred to care who rules so long as the responsibility is not ours. I am afraid that we are to pay a heavy price for our indolence.

Say no more. There are many moments like this, either in terms of political commentary or personal cry for understanding, which resonate deeply. (I feel compelled to stress at this point that I am not a confirmed elderly spinster living with a tribe of cats, nor do I intend to be, but you get my drift.) As Simon Garfield says in his introduction, Jean’s journal truly is ‘the work of a soul singing through time‘. And that’s what makes it so addictive and compelling – quite apart from the voyeuristic fascination of reading somebody else’s diary. It’s a song that will resonate with many of us. Lucid, funny and timeless, it evokes compassion on almost every page. Thoroughly recommended for a glimpse into a past that actually isn’t, after all, a foreign country. I hope Jean will forgive me if I finish with a quote from Alan Bennett, who in The History Boys absolutely nails the feeling that her diaries have given me:

The best moments in reading are when you come across something – a thought, a feeling, a way of looking at things – which you had thought special and particular to you. Now here it is, set down by someone else, a person you have never met, someone even who is long dead. And it is as if a hand has come out and taken yours.

Jean with her beloved cats

Jean and her frenemy Nockie