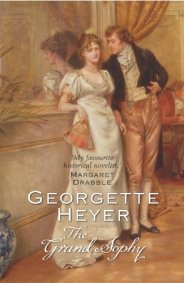 I’m currently ploughing through Deadhouse Gates, which really puts the ‘grim’ into ‘grimdark’, and needed something light and fluffy on the side. Enter Georgette Heyer’s The Grand Sophy, a gorgeously warm-hearted story, with one of the most appealing Heyer heroines I’ve met so far. Having lost her mother as an infant, Sophia Stanton-Lacy has been brought up by her erratic diplomat father, Sir Horace. While most girls would be planning coming-out balls, Sophy has been playing hostess to officers and noblemen in Spain, Brussels and Paris. Capable, shrewd, game and compassionate, she makes friends easily and delights in helping those she loves – though her plots are rarely suitable for the faint-hearted. When Sir Horace is posted to Brazil, Sophy comes to stay with her aunt Lady Ombersley’s family in London. Expecting a poor little orphan, they are little prepared for the storm of personality that sweeps in among them. And this is only the beginning, for Sophy rapidly sees that her family have got themselves into a terrible tangle, which only she can solve…

Lady Ombersley is kind, but prone to nerves and thus fundamentally unfit to prevent her family disintegrating around her. Her husband, the spendthrift Lord Ombersley, has done little over the last twenty years except burdening his kin with a shocking number of debts. These would have dragged them down into complete disgrace were it not for the family’s eldest son, Charles Rivenhall, who is everything that his father is not: practical, frugal, sensible, cautious, honourable to a fault. Thanks to the bequest of a wealthy uncle, Charles is the only one in the family with any money and, consequently, has taken charge, doing his best to take the estate in hand. All this, of course, would be eminently admirable if he weren’t also prone to being a domestic tyrant. And, to make matters worse, he is engaged to be married to the ghastly Miss Wraxton, whose self-professed virtue and good sense threaten to stifle whatever little joy the Rivenhalls have left. Indeed, so vocal an admirer of peace and tranquillity as Miss Wraxton can find little to love about Sophy, who prefers laughter to sober reflection.

But Sophy doesn’t have time – yet – to worry about Miss Wraxton. She’s just at the tip of the iceberg. Cecilia, Sophy’s eldest girl-cousin, is meant to be marrying the eligible Lord Charlbury, but has developed an inconvenient passion for the beautiful Augustus Fawnhope. Augustus is doubly inappropriate, as both a younger son and a poet, whose charming verses warm Cecilia’s heart but are hardly suitable for making a living. This clearly won’t do; and then there’s cousin Hubert, who is given to cards and horses and seems to be labouring under his own burdens. And what of Sophy’s own responsibility – her father’s promised bride, the Spanish Marquesa Sancia, who has taken up residence in Merton until Sir Horace should come back home to London? Such a multiplicity of challenges would daunt anyone less accomplished than the Grand Sophy.

Deftly, Sophy sets about her mission to brighten up the household and retie the knots of affection in more suitable patterns. Calling on friends old and new, she sets out on her ambitious scheme to give the Ombersleys what they need. Rather like Austen’s Emma, she is passionate about doing what’s best for people – though fortunately she has rather more self-awareness and genuine kindness than Emma. She also has a very unsuitable streak of wild mischief, as Charles finds to his peril. Instead of the quiet, overwhelmed cousin he’d expected, Charles is faced with someone who’s better connected than anyone else in the family; who’s a proud and experienced horsewoman; who challenges all his notions about what’s ladylike, proper and suitable. Personality clashes are a given – but the most distressing thing, for Charles, is that he starts to suspect the quiet, well-behaved future he’s planned with Miss Wraxton may not be quite what he wants after all…

Heyer’s novels are often predictable to some degree, but this is much more complicated than usual, with several different romantic pairings to sort out. There are all manner of plots and sub-plots: a ‘kidnapping’, headlong escapades in carriages; blazing arguments; ducklings; and a brilliantly chaotic denouement which keeps just on the right side of outright farce. The action literally doesn’t stop until the last line. Throughout all the madness, Sophy keeps her good head on her shoulders and her grip on the reins; and lives by her own personal code of generosity, frankness and high spirits. I warmed to her immensely. This is one of my favourite Heyer novels, up there with These Old Shades and Sylvester, and I’ll definitely be reading it again.