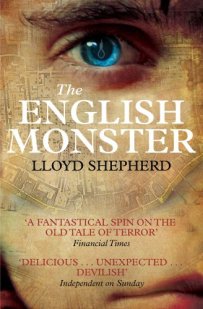 In December 1811, two horrific murders shocked London’s East End district of Wapping. The cloth merchant Thomas Marr and his family are found mutilated in their home: father, mother, shop-boy and baby. Mere days later, the Williamsons, proprietors of the King’s Head pub, suffer the same fate. Known as the Ratcliffe Highway Murders, these events really happened, as did the clumsy investigation by the Shadwell magistrates that followed. Lloyd Shepherd makes this the basis of his eerily compelling novel: an early police procedural mixed with an ominous ancient evil. As the people of Wapping clamour for justice, Constable Charles Horton of the River Thames Police Office – under the aegis of his ex-navy boss, John Harriott – embarks on an investigation that, before it ends, will have ushered him into the very darkest places of the human soul.

And then, two hundred and fifty years before the Marrs and the Williamsons died, we meet Billy Ablass, whose fate will echo down the centuries. Innocent Billy wants nothing more to make a fortune so he can go home to Stanton St John and raise pigs with his wife Kate. With a recommendation in hand from Kate’s father, he comes to Plymouth in search of John Hawkyns, whom he hopes to impress with his willingness and initiative. Hawkyns takes on young Billy as a sailor on the Jesus of Lubeck, a great vessel loaned by Queen Elizabeth herself to carry their expedition to the New World. But what is the charismatic Hawkyns searching for? As they set off across the ocean, to places so exotic that Billy has barely even dreamed of them – Africa; Florida – the young man realises that they are after a new kind of wealth, which promises to make them all rich: black gold.

The relationship of the British with the sea and, especially, slave trading is a thread that runs deep within the novel, reminding us of that unpalatable aspect of our pasts, and the foundation of much of our national ‘importance’. While Billy’s experiences with Hawykns reflect the earliest days of English involvement in the trade, the story set in 1811 unfolds at a time when slavery has finally been forbidden. Throughout the story’s other threads, which take us to Tortuga in the great age of the buccaneers and to Jamaica in the tainted heyday of the sugar plantations, we continue to see the effects of this exploitation of human life. And, when Charles Horton finally discovers an interesting lead at Sheerness, it’s bound up with one of the most tragic and reprehensible events in the later history of the slave trade, the massacre on board the Zong. It’s an important reminder of exactly what stimulated British naval wealth and power – at least, once we got beyond those rose-tinted Elizabethan notions of singing the King of Spain’s beard.

The historical spread of the novel brings us into contact with several major figures, though I’m glad to say that Shepherd manages to avoid falling into the pernicious trap of the Good Morning Dr Johnson School of Historical Fiction. Here is Francis Drake as a young untried man on board his cousin Hawkyns’s vessel; the great buccaneer captain Henry Morgan, in his dashing prime and as a fat, miserable, wasted man in his Jamaican old age; here, too, to my pleasure is Hans Sloane, the doctor hungry for knowledge and understanding, who served as President of the Royal Society and whose collection formed the basis, of course, of the British Museum. For his own part, John Harriott was a real magistrate, famous for his energy and his passionate commitment to justice, unlike his incompetent colleagues in the Shadwell ward who were meant to be thoroughly investigating the Ratcliffe Highway Murders, but whose efforts get short shrift here. And, through the lives of all these men, there moves a shadow, a taciturn, threatening, unsettling figure which links them together like beads on a chain and which connects them, in a strange, unholy brotherhood, with the Marrs and the Williamsons in 1811.

I can’t deny that this book keeps you reading; but there are lots of questions it doesn’t answer and that’s where I found it frustrating. I’m going to have to be immensely careful to avoid spoilers. What, for example, is the precise nature of this ancient evil; this curse? A lust for blood, of course, but for what purpose? How do the effects of that curse act as fair revenge for its originators – simply as a one-person swathe of killing? What are the ultimate plans for the Zong? What is the meaning of the ‘humming’ that we hear on occasions when blood is about to be spilled? Is blood even necessary or do the killings simply happen out of a desire to keep movements and plans secret? Yes, it was that whole area around the fantastical elements that I feel needed a bit more explanation. Of course I understand that to be unexplained makes it even more weird and unnerving, but since we spend some time with the killer as narrator, I expected – or hoped – to end up understanding a little more than I did. Nor do we have the benefits of Soane’s insights.

In conclusion, some things remain a little frustrating, but this is nevertheless an engaging book; not only for the creativity and gumption with which it throws light on an early murder investigation (one I’d never heard of before). Moreover, it gives us a glimpse of the London Docklands as they claw their way from being lawless marshes to becoming the stalwart keeps of Empire trade, in a transitional point of the city’s history. Not always satisfying for those, like me, who like their loose ends tied off neatly in little bows, but a perfectly enjoyable Gothic tale for a grey Monday Bank Holiday. And in fact, maybe the loose ends aren’t meant to be tied, for I’ve just this minute discovered that this is the first of four books by Shepherd which feature Charles Horton… so at least some of the characters from The English Monster will be making a return in future novels.