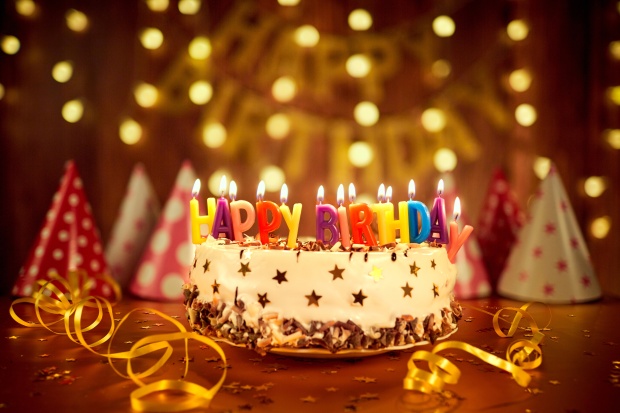 Time has done that thing again where it speeds up and, before you know it, another whole year has gone round. Today is this blog’s eighth birthday and, even though I haven’t been massively active in the last few months, it’s still very much a going concern, so don’t worry. It takes a special kind of determination, to browse through pictures of cake and candles when it’s so hot here in London that the thought of consuming anything heavier than iced water is almost unbearable… but I’ve taken one for the team, as you can see. So join me in a slice of virtual birthday cake and a glass of the beverage of your choice.

Sheesh, this last year has been intense! It was dominated by real (working) life rather than the blog, but I’ve managed to get a bit of crossover. The major event offline was the Mantegna and Bellini exhibition, which finally closed in Berlin last month and which was such a joy to be part of. Not only did I work with some fantastic art, but it also helped boost the length of my publications list, and gave me the chance to do lectures, audio recording and film, all of which was fun – albeit a bit scary at the time. No doubt, in due course, a post will crop up about my current project on Piranesi’s drawings. A small exhibition will be opening at the British Museum next February, and hopefully there will also be a little book with lots of gorgeous pictures, so keep your eyes peeled!

As you can appreciate, the portion of my life taken up by ‘not work’ has been much smaller than usual this year, but I’ve still been able to enjoy the Handel Festival – the highlight was undoubtedly Berenice – and I’ve recently enjoyed an excellent Figaro at the Grange Opera Festival, which I’ll write about very soon. I’ve seen both Franco Fagioli and Max Cencic in concert; the former was at Versailles back in March, so probably too long ago to write about now; but Cencic was just a couple of weeks ago, and in the best form I’ve ever seen him, so I hope to get something up on that, even if it’s short. Plays haven’t been wanting either, and the standout production of the first half of this year was probably Shadowlands at Chichester; although recently I seem to be on a Midsummer Night’s Dream kick, with two very good productions within a couple of weeks of each other. One of these was brilliant to the point of completely changing the way I think about the play. It’s at moments like that, that I’m so grateful to live in London and have the chance to enjoy all this fabulous stuff on my doorstep.

My real-life friends know that I went on a bit of a bender in 2018 as far as book-buying was concerned (*suitably embarrassed face*) and I’m now strictly rationing my time in second-hand bookshops (except when I go anywhere with H, who is a completely shameless enabler). Due to the intellectual demands of work, my leisure reading hasn’t always been particularly elevated or thought-provoking, but I like a guilty pleasure as much as the next person. I have to name-check Liane Moriarty, whose glossy chick-lit thrillers helped me to keep turning the pages when I didn’t think I had a functional brain left. I still hope to get posts written on some of the books I have managed to read and, going forward, I’ll be more disciplined about posting immediately after I read them.

So I guess this year’s birthday post is aimed at reassurance (‘Hello everyone! I’m still here!’), penitence (‘Sorry I didn’t write more’) and, as ever, gratitude that you are still out there, reading my posts when I’ve been able to write them, and commenting. Once this abominable heat breaks, I’m going to choose a few books to tackle over the summer so that I can take The Idle Woman forward into a slightly more regular ninth year. In the meantime, does anyone have any recommendations for books to read in Stockholm? We’re off there for a long weekend in a fortnight or so – complete with a trip to the opera at Drottningholm, which will be brilliant – and I’m always keen to read something appropriate to the place I’m in. Avoiding Scandi noir, are there any fantastic pieces of historical or contemporary literary fiction that I simply shouldn’t miss?

Thank you all for sticking with me through what has been a rather… busy time, and I’m looking forward to getting back into my usual reading and writing routine. Hopefully the weather will break soon – as I write this, it’s 36°C in London, which is obviously absolutely mad in a city which isn’t known for its air-conditioning – but it looks like we’re in for refreshing thunderstorms this evening. The perfect excuse to have a nice cold shower and then curl up with a book…