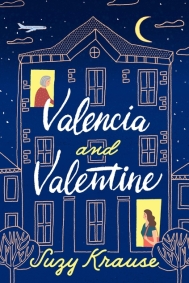 Suzy Krause’s debut novel is a charming low-key tale of two women whose lives have been formed by stories. On the one hand is garrulous old-age pensioner Mrs Valentine, always ready with a twinkle in her eye and a new instalment of her colourful life-story. On the other is Valencia, crippled by neuroses and social anxiety, stuck in a dead-end job as a debt collector. Her stories are within her mind: the relentless litany of things that might go wrong if she forgets to do one tiny little things. Crushed by past guilt, Valencia has limited her life to her flat and the four walls of her work cubicle; but, as her thirty-fifth birthday approaches, she begins to long for change. And then, quite of the blue, the possibility of change appears: in the form of a new colleague and an unexpectedly friendly client. Could this be the start of a new life? Or will it be simply the same old tale of opportunities missed through fear, shame and cowardice?

No one could ever accuse Mrs Valentine of being ashamed or cowardly. She may be old, but she’s facing her octogenarian years with grace and humour. When her best friend Mrs Davies dies, Mrs Valentine decides to take on Mrs Davies’s granddaughter Anna as a home-help – although Anna soon realises that her purpose is as much to listen as it is to clean. Mrs Valentine has a heartful of stories to recount: a life full of romance, adventure, spontaneity, love and grief, and she wants to share them all. As Anna settles down, Mrs Valentine begins to tell the story of her very first trip, at the time of her thirty-fifth birthday. Waking up one morning, she realises that life will never change if she doesn’t do something to encourage it and, rather than go into work, she takes a flight to New York. Here she will find an authentically different world but, at the same time, something even more precious: the unexpected man of her dreams.

Valencia may be eyeing up her approaching thirty-fifth with the same distaste as Mrs Valentine once did, but she can’t be sure that she’s going to do anything about it. She knows she should. Her therapist has told her many times that she needs to face her fears: of flying on planes; driving on the highway; risking herself in any way whatsoever. And so Valencia dutifully makes lists of places she wants to go, knowing full well that she’ll probably never make it anywhere but her flat and her desk. She can’t even bring herself to drive home to see her dying grandmother, despite her mother’s tearful pleas over the phone. It isn’t indifference: it’s pure, intense terror. Valencia’s OCD handicaps her as effectively as two broken legs, making it impossible for her to seriously contemplate going anywhere without immediately imagining the numerous awful ways in which she will, inevitably die as a consequence.

And then something changes. Valencia’s office has always been the domain of identikit brown-suited, unexciting men, but one morning Peter is there: young, good-looking, friendly (if only she could remember how to conduct successful social interaction!). Embarrassed by her hopes for him, Valencia tries to keep him at arm’s length, because someone so charming and handsome will surely be disgusted the moment he realises how completely incompetent she is. She takes solace in increasingly chatty conversations with James Mace, one of those rare clients who doesn’t threaten to kill her when she calls him about his debts. In fact, the more they chat, the more their relationship strays away from something professional and towards something… softer. More personal. More like friendship. Perhaps, Valencia thinks, this is the only kind of friendship she can have – one where the person is at arm’s length, without the challenge of having to deal with them in real life. And so, shrinking and shy and miserable, she forces herself onward, wondering if she will ever truly find a way out of the prison her mind has created for her.

Krause is very good at conjuring up the claustrophobic agony of obsessive thought and mental illness. This could very easily have been a kind of ‘kooky’ book and there are one or two moments where it does fall over the line; but Valencia’s struggles are so real and suffocating that it stops things from feeling too saccharine. Her blinkered life is thrown into ever-greater relief by the ebullient Mrs Valentine’s stories of her globe-trotting and her love affair, things that perhaps Valencia will never be able to relax enough to enjoy. But, if this book has one message, it’s that none of us can truly predict where we can end up. It’s well-intentioned and sweet, a little indie heart-warmer of a novel, and, if you sometimes feel yourself longing for a bit more richness or depth – or perhaps characters whose overriding trait isn’t ‘quirkiness’ – you can’t help feeling a bit mean.