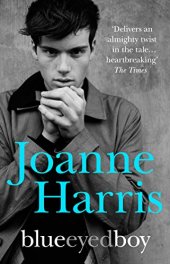 On a web-journal mailing list, blueeyedboy holds court. He is the ringmaster of his own little circus, the svengali to his audience of adoring readers, the puppetmaster of their fantasies. World-weary and nihilistic, he begins to tell the fable-like story of three brothers, brought up by their widowed mother and each, for ease, given their own signature colour: Black; Brown; and Blue. Struggling against each other, and against the mercurial furies of their dangerous, unpredictable mother, the boys try to carve out their own identities in their bleak little town. But this isn’t just a story of three boys coming of age. It’s a tale of ambition, obsession and, most fascinating of all, murder. Don’t get over-excited, though, blueeyedboy coyly reassures his readers: it’s only a story. The problem is that not everyone seems to believe him. Setting her story in the same town as her St Oswald’s novels, though in a far less privileged neighbourhood, Joanne Harris invites us to come down the rabbithole of internet anonymity, where everyone wears avatars and usernames, and no one is quite what they seem.

Now, I like Joanne Harris. I particularly liked her Gentlemen & Players, which was a wonderful tale of misdirection and envy, told from the perspective of a narrator looking on from the sidelines at a world forever out of reach. There’s a similar feel here as, for all his bravado, blueeyedboy is stuck: a forty-something man still living at home with his mother; the one who never quite got away. But at least he’s here: a survivor – which is more than can be said for either of his brothers. His laconic voice is appealing, certainly, but Harris seems to have grown over-ambitious in this book. There are too many stories floating around, too many threads, too many overt attempts to mislead. And, for all that’s holy, when will publishers stop putting ‘massive twist!!!’ spoilers on book covers? If there’s a twist, I don’t want to know in advance. I just want to stumble across it, and be thrilled and surprised and delighted. I don’t want to read the book feeling like a man on a dark night waiting to fall into the pothole he knows is around somewhere. And, once you know there’s going to be a twist, you start to read more closely and you see exactly how much effort is going into spinning the web – it feels as if Harris is more interested in her plots for their ability to mislead, rather than for their coherence as strands of a story.

There is so much going on here, it’s hard to know where to start. Blueeyedboy is haunted by many things: not only his relationship with his brothers, but also by a scandal that happened many years ago in his small town. He’s obsessed with what happened to a blind little girl called Emily; smugly nonchalant about a series of murders that just happen to have befallen people he doesn’t like; and troubled by synesthesia. (For a very rare neurological disorder, synesthesia plays a remarkably central role in this novel.) For most of the book, we can only see through his eyes and listen to his voice, weighing up his playful half-denials, wondering how far the fiction really goes. When other voices begin to counter his, it somehow punctures the tension as well as adding to the complexity of the plot. The frustrating thing is that Harris is a good writer and so all the parts are well done – but they just don’t quite meld together properly. Moreover, you often risk losing track of what exactly is going on, especially towards the end as two different voices skip between past and present, truth and lies. By the time the end comes, it feels anti-climactic and – to be honest with you – a bit of a cop-out.

It is interesting to have a book in which so much relies on the anonymity of the internet – especially one first published in 2010 and, by its very nature, a little dated. The kind of mailing list used by blueeyedboy and his readers feels like a period piece now – which isn’t a problem at all; indeed, it rather adds to the book’s charm. The questions about identity, trust, reality and fantasy, and online friendship, however, are just as relevant today and perhaps even more so, now that social media has taken off in a way that none of the characters here would recognise. So it’s thought-provoking – but the problem is that it pushes the story so far into thriller / horror territory that it actually becomes a bit ridiculous towards the end. And, when everyone’s bluffing and double-bluffing, it’s hard to actually build up any kind of empathy for the characters, even if blueeyedboy is the kind of unrepentant antihero whom I’d normally rather relish.

Not her best, therefore. It tries to do too much, and ends up not really succeeding in any of it, leaving the reader with an impression of too many tangled plotlines, and a sense of profound irritation at having been manipulated pretty much from beginning to end.

One thought on “Blueeyedboy (2010): Joanne Harris”