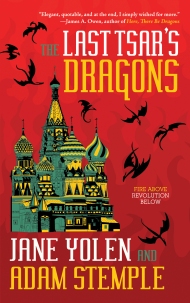 Russia, 1917, under the autocratic rule of Tsar Nicholas II. The imperial will is enforced by the airborne terror of the Tsar’s dragons: great black beasts reared in the palace stables and then sent out across the country to ravage the lands of those the Tsar deems offensive – the Jews chief among them. But times are changing. In a quiet Jewish village, a group of ambitious men have long dreamed of bringing that change to Russia. Now they have the means. As their leader Lenin drums up support beyond the Russian borders, Bronstein and Borustch carefully work on a secret weapon that will bring down the forces of tyranny once and for all. Meanwhile, mutiny also simmers within the palace walls as a cabal of courtiers plot to rid themselves of the charismatic monk Rasputin. Set in the final days of the Romanov dynasty, this is a strange little novella: historical fiction skewed by the addition of dragons, which somehow never quite takes flight.

The Last Tsar’s Dragons was first conceived as a short story for The Dragon Book, an anthology put together by Jack Dann and Gardner Dozois. I haven’t read the original, shorter version, but this novella unfortunately still does feel like a short story, without the richness or depth that the longer format allows. It’s like a sitcom trying to survive on the strength of a single good joke. The key idea is this: the Tsar has dragons. Deep in the Russian forests, a group of would-be enemies have also managed to find a cache of dragon eggs which, when they hatch, become red dragons – the Red Terror in the flesh. But this idea isn’t really developed: the dragons really don’t do much for the majority of the story, and they don’t change the course of history. The poised wit of Temeraire, and that series’s alertness to counterfactual possibility, isn’t present here. Instead, most of the story isn’t about dragons at all. The authors seem far more interested in Rasputin.

And who wouldn’t be? Rasputin was a fascinating character and so many legends swirl around him that he’s ripe for a historical fantasy treatment. We see him exploiting his magnetic allure to get court women into bed, and to maintain his hold over the Tsarina and her fragile son Alexei – but we aren’t taken into Rasputin’s mind. We don’t really get to understand what he wants. We don’t see where he came from, or how he reached his present position, and we don’t really understand why the courtiers hate him so much – except for his enviable proximity to the imperial family. Maybe that’s enough? Much of the story revolves either around Rasputin himself or around the anonymous court functionary (the only first-person narrator among several plot strands) who dreams of getting rid of the monk once and for all. But all this could be a perfectly straight piece of historical fiction. I suppose I felt that the dragons were just there as a bit of a gimmick, to add sparkle to what is otherwise a rather prosaic and superficial story. And it feels like a monumental waste of opportunity – both because the dragons didn’t do more, and because the story itself, which covers such momentous and dramatic times, felt so flat.

This was a bit of a disappointment. As usual, I seem to have taken a more critical stance than other readers: you’ll see that Amazon has glowing reviews and quotes from very favourable press coverage. Unfortunately, it just failed to press my buttons. I preferred another historical-fantasy treatment of this same period, also in novella form, but considerably richer and more complex: The Five Daughters of the Moon – no dragons, I admit, but court intrigue and charismatic monks aplenty. I think this is probably just a rare misstep, because Jane Yolen is widely admired as a fantasy author. Although I haven’t yet read any of her other books, I do have a couple waiting on my Kindle, so we’ll see how I get on with those.