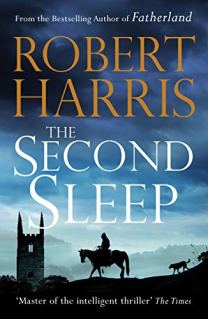 Robert Harris’s new novel opens on a bleak evening in 1468, as a young priest makes his way wearily towards the village of Addicott St George. The parish parson, Father Thomas Lacy, has recently died and Christopher Fairfax has been sent by the Bishop of Exeter to oversee the burial. It’s supposed to be a quick job but, when Fairfax arrives, he begins to hear rumours of murder that he feels bound to investigate. Even worse, he makes shocking discoveries in Father Lacy’s study: the former priest was dabbling in dangerous heresies, which seem to have had some bearing on his mysterious death. And that, my friends, is all I feel able to say before the cut. I will add that I found this an engaging, amusing and unexpectedly engrossing novel, and that if you’ve enjoyed Harris’s earlier works you would do well to give this a go. But The Second Sleep is a novel best approached in complete innocence. If you haven’t yet read it, but think you might like to, I urge you to stop right here. Don’t read past the cut, where there will be spoilers. Come back when you’re done and, while you’re reading, pay attention. Those with sharp eyes will realise pretty swiftly that all is not quite as it seems.

For me, it was the ‘common parakeet‘ which flies out of the darkness and startles young Fairfax. I’m no ornithologist but I know that a parakeet has no place in medieval England. The long-case clock in the parsonage also gave me pause, although I didn’t feel confident enough about horological history to be absolutely certain. But I definitely knew something was up when Fairfax discovered The Proceedings and Papers of the Society of Antiquaries in Lacy’s study (the Society was founded in 1707). There are further playful hints before things are made explicit: consider Fairfax’s admiration of ‘ancient glass … completely clear and smooth, with none of the rippling effect produced by modern glazing‘. By now, sirens were going off in my head, and I hardly needed the contents of Father Lacy’s curio cabinet to make things clear. With his customary sleight-of-hand, Harris tips our expectations on their head and turns our notion of history inside-out. And, as we follow Fairfax in his investigations, the quest gains new urgency: we no longer seek to understand what happened to Father Lacy, but also what happened to ourselves.

Although there’s little comedy here, it is a playful novel. Harris reflects our own age back at us in fragments, inviting us to think about what will actually last after we’re gone. Plastic casings, the odd piece of pottery, the shells of concrete buildings, but precious few documents, now that so much has been consigned to electronic storage. As one character laments: ‘Their world was based upon imagining – mere castles made of vapour. The wind blew; it vanished.‘ As Fairfax strives to understand the lost world that so fascinated Lacy, with the assistance of his allies Sarah Durston and John Hancock, the reader has an advantage: we know what we’re looking at. It’s ironic that Harris’s book – which I purchased as a piece of historical escapism – has turned out to be another pandemic novel, although here the failure seems to be not viral but technological. The people who lived through Harris’s apocalypse don’t have the comfort of video links or phones by which they can find their relatives. Instead, they’re cast back into a terrifyingly primitive state, which becomes increasingly clear through the artefacts and inscriptions recorded by Dr Shadwell and his predecessors, with only their immediate households around them.

This is more of a thought exercise than a drama, I think, and that’s why at first I found the end a little disappointing. I wanted Harris to do the expected thing: to allow his characters a way to recover at least some of what had been lost. He builds up our anticipation with clues, with the discovery of the hidden vaults beneath the tower, and the great excavation. But, when it comes to it, he’s too clever to give us what we want. Now, like many other people, I found the ending abrupt and unsatisfying at the time. But I’ve been thinking about it ever since and actually it’s perfect this way. Fairfax and Sarah find exactly what they’ve been looking for – ancient relics of technology – but too much time has passed for them to be usable. Their function has been forgotten. They’ve been repurposed, transformed into the stuff of ritual and grave-goods. Morgenstern’s desire to keep memories alive has been twisted by the passage of ages, the loss of literacy and the efflorescence of oral myth. He has become the focus of memory, rather than the technology which he hoped would resurrect the past. Those final scenes in the vaults – the hand-paintings looming out of the darkness; the closed tomb-chamber; the decorative grave-goods – were like a fast-forward journey through human civilisation, showing how little separates us from prehistoric man once literacy and memory are gone. There were echoes of the bone-spinning scene in 2001: Space Odyssey (in reverse?).

So, yes, this isn’t really about a post-apocalyptic world. It isn’t about the recovery of ancient knowledge. It’s about what happens to people – to civilisation – when the props that support it crumble away. And really it’s about that final scene in the death-chamber, the moment when the reader realises that everything is lost – and not just in the immediate sense, because our characters end the book in a pretty hopeless situation – but in a broader sense too. There’s something totemic about it. Hence the title – just as Harris’s characters sleep, then wake, then sleep again, so civilisation is the brief flash of wakefulness in the midst of a dark age of slumber. I’m reminded of Bede’s sparrow, flitting from darkness into the warmth of the lighted hall and then out again, but I suppose The Sparrow in the Hall would’ve been an even more bewildering title…

That means we don’t have to be quite so critical about the structure of Harris’s new 1468, because that whole setting requires us to suspend a huge amount of disbelief. Would culture really have followed the same developmental path all over again? If churches have survived so well, what about all the other millions of buildings? Lacy’s antiquarian books focus on a few key sites that have survived, but I don’t believe that everything else would have vanished in the course of eight hundred years. If the past has been so extensively forgotten, how is it that children in Addicott St George are playing with very accurate models of aeroplanes? How would they have known what they looked like if no examples survived and if the church had suppressed all memory of the technology? Harris is obviously willing to suffer some gaps in order to achieve that slow-build, slow-reveal tension that makes the book so absorbing to read – but there are definitely things that niggle annoyingly at the mind afterwards.

Personally, I really did enjoy this novel. I thought it daring, clever and well-structured, despite the flaws of the world-building. The hints are subtle and clever – that parakeet! – which flatter the reader who notices the incongruity. Not everyone will share my enthusiasm, though, because not everyone is happy to change genre with the abruptness of a handbrake turn, and I suspect the sleight-of-hand could come across to some as gimmickry. However, I’m a historian and am cheerfully predisposed to like novels in which historians and archaeologists are heroes, piecing back together the mysteries of a vanished world. No, The Second Sleep is not perfect, and can only exert its full impact on the first reading, but it is a thought-provoking read – less alternate history than alternate future. And, despite its clever concept, it’s part of a noble tradition of ‘arrested history’ novels, including Kingsley Amis’s Alteration and Keith Roberts’s Pavane. I would say ‘worth reading’, but if you’ve got this far, I very much hope you already have read it, otherwise you’re now entirely spoiled…