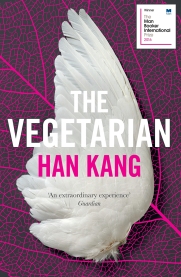 If Gloriana unsettled me with its profuse exuberance, Han Kang’s Booker prizewinning 2015 novel takes the opposite tack. This is a book in which everything has been stifled and pressed down into aching silence. Its protagonist, a young woman named Yeong-hye, is trapped in an unhappy marriage with a self-centred, indifferent and arrogant husband who kicks off the book by informing us that she is ‘passive’, has ‘neither freshness nor charm’ and that he’s always thought her ‘unremarkable in every way’. For years, Yeong-hye has ministered to her husband’s needs quietly and efficiently; but things are about to change. One night, an alarming dream prompts Yeong-hye to make an announcement. She is becoming a vegetarian. It’s a step which leads to chaos within her family and scandal outside it, as Yeong-hye’s lifestyle choice becomes caught up in the much broader question of women’s self-determination. Ironic, compassionate and brutal by turns, this is an uncompromising book: one that isn’t always easy to read, but which shines a fierce light on the injustices of a heavily patriarchal society.