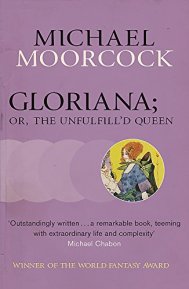 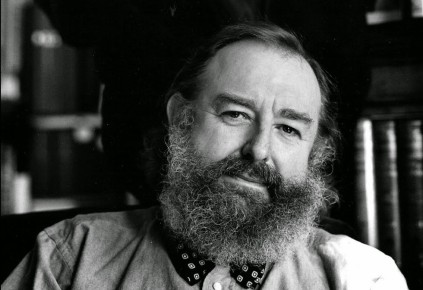 I genuinely didn’t think I was going to like this. I’ve only had one encounter with Michael Moorcock before and that was in my early teens, when I found a copy of Behold the Man among my dad’s 1970s sci-fi books in the attic, and was promptly traumatised. Not that I was religious or anything like that. I was just shocked to see Jesus and the Virgin Mary depicted in such a way. What an innocent I was. Youthful shocks have an impact, though, and I’ve steered away from Moorcock ever since, thinking him far too weird for me (I have the same feeling about Alasdair Gray). But times change. I recently found myself looking at Gloriana in the library. It was an allegory, a fable, a Tudor history set in an alternate universe, an Elizabethan extravaganza. Why not give it a shot? So I did. And, Reader, I liked it. There was one scene I didn’t like, true, but for the most part I was utterly absorbed by this sprawling, dense jungle of a book, which wears its affection for Mervyn Peake’s Gormenghast very clearly on its sleeve. A seething stew of sex and sycophancy, full of tunnels and intrigue and secrets and bravos and debauchery and honour and twisted goodness and dreams and hope and horror… it defies description.

Nevertheless, I’m going to have a go at describing it, otherwise there isn’t much point in writing a post. We are in Albion, the head of a global empire that stretches from Virginia in the New World to the borders of Tartary. Revered, feared and admired by its neighbours, Albion has achieved the dream of many a state: it is contented, stable and generous. Its harshest penalty is exile. And at its heart is Gloriana, the magnificent Queen, whose masques and pageants provide her subjects with a glorious array of chivalrous escapades to wonder at. Gloriana has become the saviour of her people, succeeding her vicious father King Hern and turning his age of suspicion, darkness and treachery into a new golden age of peace and prosperity. The wellbeing of the state rests upon her broad and shapely shoulders; and yet, should you scratch the surface of this idyll, it swiftly begins to show cracks. For all her success, Gloriana has one deep, abiding grief. Although she is no Virgin Queen – she has had nine girl-children, and numerous lovers of both sexes – none of her paramours have ever brought her to orgasm. Hence the book’s subtitle. This mighty Queen, who has the bounty of all the world rolled out before her, is tormented by the lack of the one thing that her own body can never give her.

While the scions of foreign powers – the Caliph of Arabia and the King of Poland – vie for Gloriana’s favour, hoping to coax her into marriage, Gloriana’s doughty ministers keep watch against the shadows of the past. Her great Chancellor, Montfallon, stands firm at his young mistress’s side. He has smoothed the path for Gloriana, at great personal cost, and is the author of the golden lie that plays out daily in Albion’s gilded spheres. For Montfallon, the idea of a state without blood is a pretty fiction. His tool is Captain Quire, a sly, black-clad malcontent straight out of a Jacobean tragedy, shrewd and world-weary and cunning. Montfallon has come to rely on Quire but, one day, when he makes the mistake of condescending to his henchman, he loses Quire’s loyalty. This is the moment on which all rests. For a malcontent, turned against the state, can work miracles. And Quire is a genius. As these two wrestle in the shadow-world of the court, their plots begin to involve Gloriana’s other friends and courtiers: her eccentric astrologist Doctor Dee; her languid poet Wheldrake; and her confidante Una, Countess of Scaith. At the heart of it all lies the question: when the state is embodied by a single figure, what happens when that figure grows tired? Is it fair to place such weight on one human being? And is it fair to demand that a young woman (or man) close off the world to become the pure, far-removed symbol that their country needs?

On the one hand, you can fold your arms, roll your eyes, sigh, and say, ‘How like a male author in 1978 to see women predominantly through the prism of sex and orgasm.’ But it isn’t actually quite like that. Or it doesn’t have to be. I don’t know what Moorcock intended when he wrote his book, but much of it seems to be an allegory. For example, the palace seems to be a metaphor for the mind: the bright, glittering, fabulous surface and the hidden depths, twisted and cobwebbed and full of things we’d rather not think about. Similarly, Gloriana’s quest for orgasm seems to be a quest for broader self-fulfilment. Having spent her entire life being directed this way and that, it’s only when she takes control of her own destiny that she has a chance of reaching ecstasy. And this is the context of the scene I didn’t like. Obviously, spoilers in the next paragraph.

I found it deeply disturbing that (in Moorcock’s original version) Gloriana only finds climax through rape. Raped by her father and tormented by the memory of that, it’s only rape by Quire that brushes away this stumbling block in her mind and frees her body. A male author writing about a powerful female character who can only find satisfaction by being raped and overcome by a man… that’s pretty unpleasant in the present climate. Interestingly, Moorcock homes in on this scene in his afterword. He writes that he had no idea how it would be viewed when he wrote it. He notes that he was friends with Andrea Dworkin, who wrote to him with concerns when the book was published. And so he has a rewritten version of the scene, included here in the appendix, in which Gloriana genuinely does find release through the act of freeing herself from male dominance. I prefer that idea. Ironically, the rewritten scene feels forced and less convincing: it’s an apologetic sop, which doesn’t really flow with the rest.

Some books seem to have a mismatch with their size, if that makes sense. I’ve read quite a few books which seem shallower and thinner than they should, but Gloriana rampages triumphantly in the other direction. Intellectually and narratively, it battles the constraints of its spine and binding. It is vast, knotted, playful, allusive, full of potential plotlines that promise to spiral out into other words (I presume they do, somehow: not for nothing does Gloriana belong to ‘Moorcock’s Multiverse’). We find ourselves in a place which is both a tiny pinprick of time among all possible worlds, but also a sprawling labyrinth of lost potential and broken dreams. Gloriana’s castle is Gormenghast on steroids; Whitehall gone rampant: a mass of halls, passages, gardens, walls, roads, forgotten byways, hidden chambers and dusty old layers of the palace lying far below, like the changing faces of a palimpsest. Whole communities huddle lost within its walls and the palace, like some swarming beast, swallows up anything in its path. The writing reflects this exuberance. Moorcock becomes positively Proust-like at points, with vast tangling sentences, or lists of words, some of which tingle exotically on the tongue.

It’s hard to escape the omnipresent shadow of Peake: the book is dedicated to him. And, if Moorcock’s sprawling castle feels familiar then so too does the black-clad figure of Captain Quire, the canker at the heart of the rose, the slippery malcontent who slithers his way into the bosom of the court and breaks the golden dream that holds it together. He is a more sophisticated, more world-weary Steerpike. Yet there are other flavours here too: the book is suffused with the heavily-spiced strangeness of the late 1970s. There are also moments when its self-conscious artifice reminds me of Sally Potter’s film of Orlando and, although the characters are generally more serious and dignified, it’s difficult to escape the odd flash of Blackadder II. Yet these comparisons are more recent than Gloriana, so perhaps they betray the subtle reach of its influence. Overall, the book has a deliciously English eccentricity. Moorcock is a Londoner by birth and you can sense a kind of twisted local pride in his picture of this weird, gargantuan capital.

I can’t help feeling that there was much in Gloriana that I missed. I’ve never read The Faerie Queen, which Moorcock says was a powerful influence, so I’ll have overlooked clever references to that. I suspect I’ll pick up new things on a reread – especially after reading other books in his ‘Multiverse’. The idea of figures moving between worlds is one which appeals to me, and which is handled delightfully here with the mad alchemists working away in their laboratories; and I’m interested to see how it plays out on the wider canvas of Moorcock’s imagination. Perhaps I might even be brave and try to read Behold the Man again at some point, to exorcise my demons.