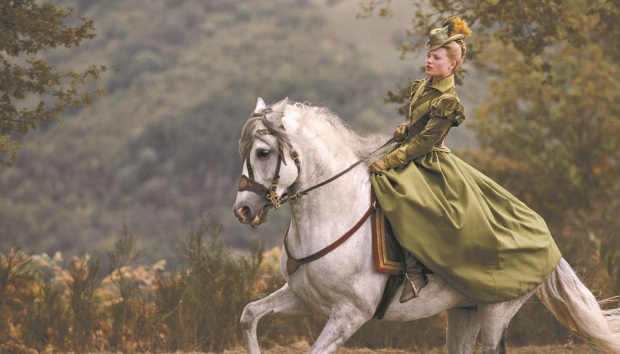 Bertrand Tavernier’s new historical epic is a bit of a mixed bag.  Based on a short story published in 1662 by Madame de La Fayette, it tells the story of a young woman’s fall from grace during the wars of religion in 16th-century France. It looks fabulous, but somehow its Gallic charm never quite forges its way through the eye to the heart.

Having been married off to Philippe, prince of Montpensier, Marie (Mélanie Thierry) does her best to forget her childhood passion for Henri of Guise; but her new husband (Grégoire Leprince-Ringuet) treats her with nervous indifference, preferring the company of his old tutor, the Count de Chabannes (Lambert Wilson).  When Marie is summoned to court, she finds herself thrown right into the path of temptation, as Guise (Gaspard Ulliel) and the duc d’Anjou (Raphaël Personnaz) both strive for her favour.  So far, so good.  An interesting counterpoint is provided by the story of Chabannes, whose experiences in the wars of religion bookend the main action.  He also plays a large role in tutoring Marie while her husband is shuttling around the battlefields of France, during which he develops more than a teacher’s interest in the intelligent and sensitive young woman.

However (and you knew a ‘however’ was coming), Tavernier fails to elicit emotional depth from his characters.  There are countless shots of Marie standing mournfully around with moist eyes, but I didn’t feel sufficiently engaged with her story in order to care that much about her; and we have to care, if the sombre events of the film are to move us.  Tavernier presents us with all the essentials – he tells us that Marie is intelligent, passionate, emotionally torn – but he somehow doesn’t manage to show us. 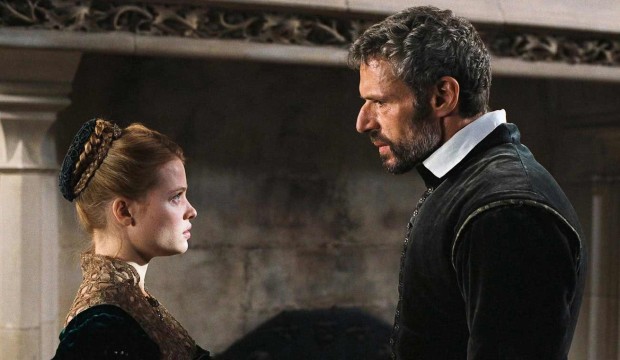 The acting is generally capable, but lacks the emotional punch that turns a competent film into a great one. Leprince-Ringuet is sympathetic enough as Philippe, the emotionally awkward boy forced into being a husband before he is ready, first bedazzled and then rapidly made suspicious by his wife’s beauty. But, for me, some of the most successful and moving acting came from Wilson as Chabannes, who managed to convey a deep world-weariness and a powerful concern for Marie.  Nevertheless, I was puzzled by his decision at the end to stop protecting Marie from herself, and to allow her to commit a folly with Guise which could only lead to disaster; having done this, why does he then write a letter to her counselling her to keep away from Guise?

To round off, Guise seemed to be the romantic lead in all of this and he certainly looked the part. Gaspard Ulliel was suitably dashing in black velvet, his sword always to hand, and never afraid to throw himself into a fight.  Of course he was a cad as well, but he had enough screen presence to convince you that Marie would still be troubled by thoughts of him after her marriage to the fairly bland Philippe.

The pacing of the film, especially at the beginning, is a little slow – I feel that Chabannes’s initial journey is spun out just a little bit too much – but the cinematography and the costumes are stunning.  The film looks gorgeous, and the main actors are all young and beautiful.  I did think the duc d’Anjou’s hairstyle and makeup were a bit too modern, but perhaps that just shows my ignorance of 16th-century style.  The film tends to flow along in a very unobjectionable fashion, albeit without any really punchy scenes that linger in the mind.  If you enjoy the little subgenre of French historical dramas, you should see this.  Perhaps you will be moved by it more than I was.

Have at you, sir! Philippe (Grégoire Leprince-Ringuet) and Henri de Guise (Gaspard Ulliel)

To mention other French historical dramas, though, requires us to acknowledge that very large elephant over there in the corner of the room. La Reine Margot (1994): possibly the most stunning, sensual and powerful film about the Wars of Religion and the St Bartholomew’s Day Massacre.  Anyone who has seen Margot will recognise many of the themes and characters in La Princesse de Montpensier; and Margot still casts a very long shadow, which Tavernier and his cast can’t quite manage to dispel.  (Personally I have to add that, as a romantic lead, Vincent Perez blows Gaspar Ulliel out of the water.)

I want to finish with a bit of a spoiler.  Specifically, the final line of the film, which flabbergasted me:

As Monsieur de Chabannes had renounced war, so I would renounce love.  Life would be no more than a succession of days; and I wished it to be brief.

This was distinctly unsatisfying.  After two hours of following Marie’s emotional travails, I felt a bit cheated that the only thing she had learned was a negative – ‘I shall not love’.  There was no sense of how she would continue in life; whether she would manage to recover Philippe’s respect; I simply felt as if we left the character in a vacuum.  Or is this, again, a fault of my unrealistic expectations?  People don’t have to go skipping off into the sunset, hand in hand through fields of sunflowers, but I do like there to be some kind of resolution.