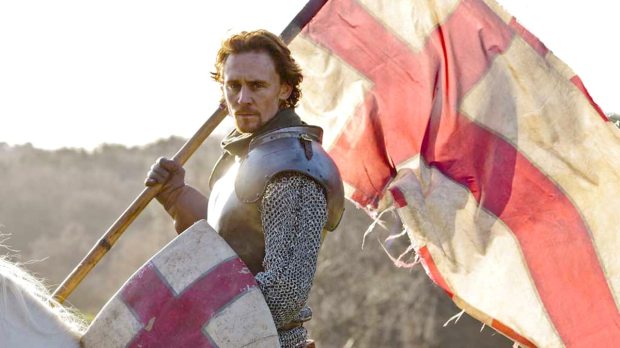 Last night I finally settled down to watch the BBC’s adaptation of Henry V, screened last year, as part of The Hollow Crown series. I should have watched the two parts of Henry IV first, it’s true; but I was discussing Tom Hiddleston with Heloise yesterday (re. his being a fan-favourite to play Lymond, if that ever comes to the screen) and was curious to see how he’d fare in this lead role.

The Hollow Crown was commissioned as part of the celebration of British culture that accompanied the Olympics, and is a sequence of films covering four of Shakespeare’s history plays: Richard II, Henry IV Parts 1 and 2, and Henry V. The cycle tells how Henry IV deposes and murders Richard II, a sin which haunts the English crown until it is expiated by the piety of Henry V, who goes on to become one of the greatest kings of England. Henry V itself follows the young king as stands up to his enemies’ mockery of his youth and idle past, goes on campaign to France and learns the qualities of kingship, eventually leading his handful of troops to a great victory against the French at Agincourt.

Many a thousand widows
Shall this his mock mock out of their dear husbands
Mock mothers from their sons, mock castles down;
And some are yet ungotten and unborn
That shall have cause to curse the Dauphin’s scorn…
His jest will savour but of shallow wit
When thousands weep more than did laugh at it.

My touchstone for Henry V, as I’ve said before, is the film starring Kenneth Branagh and I can’t help using that as a basis for comparison. Sharrock doesn’t have the budget of a full-blown feature film (the BBC is not HBO) and so the Battle of Agincourt is a fairly modest affair, with about twenty swordsmen on each side, twenty English archers and ten or fifteen French knights. But, having said that, she makes the best of her limited resources and pulls off a couple of impressive set-pieces such as the long shot of the French army lining up for battle, or the English army crossing the Channel. Working with a small cast, she gives some of the play’s big scenes a more intimate flavour, particularly the ‘St Crispin’s Day’ speech. No one will ever be able to do that speech as well as Branagh, in my opinion, but I enjoyed the way Sharrock turned it into a quiet conference between the army’s commanders, rather than trying to match Branagh’s rousing call to arms. She makes one major addition, bookending the play with scenes of Henry’s funeral. This works particularly well because it reminds us that, for all his achievements, Henry is just one of a sequence of kings, and his time is numbered. It also provided the perfect backdrop to the chorus’s closing lines: a sobering reminder that all of Henry’s work will be undone during the unstable reign of his son, Henry VI.

The Duke of Exeter (Anton Lesser)

Significant parts of the text had to be cut, of course, to fit the BBC’s running time, and I found it interesting to see what was discarded and what retained. I didn’t particularly miss the convoluted explanation of Henry’s claim to the French throne, nor the comedic scenes with the Welsh, Irish and Scottish captains (these worked so well at the Globe, but I’m not sure they would have been as successful here). I was surprised, however, to see that they cut out Henry’s discovery of the French plot at Southampton, which results in his execution of the three traitorous noblemen. It isn’t strictly necessary to the wider play, but Sharrock seemed particularly interested in showing the growing steel within the young king. As such, it was a scene that would have emphasised Henry’s attempts to shake off the attachments of youth. The attainder and execution of some of his childhood friends is a powerful complement to his renunciation of Falstaff, Bardolph, Pistol and Nym – the young reprobate is becoming a man for whom duty and justice are more important than youthful sentiment.

Sharrock is keen throughout to show Henry’s grittier, harder side: she decides, for example, to include his threats to the burghers of Harfleur, promising rape and slaughter if they refuse to surrender. I think these were cut from the Branagh version (it doesn’t quite fit with the idea of Henry as a cuddly, loveable English hero). She chose to show Henry’s advisers exchanging shocked glances during this speech, which reinforces the idea of the tough warrior emerging unexpectedly from a soft, dissolute boyhood – and it worked very well. By the end of the film we’ve seen Henry practising his archery, galloping through the battlefield at Agincourt, swinging his sword from horseback or fighting desperately on foot, and we thoroughly believe in his martial qualities. And yet he is not glorious: this young king ends up mud-splattered, bloodied, weary and in pain as he limps back to camp after his victory. There is little thigh-slapping heartiness here. For this Henry, the field of Agincourt has not been a triumph but a bitter vindication of his claims to France and his strategic skill.

In a stroke of casting brilliance, the actors are all from the appropriate countries (except the Duke of Burgundy, played by Richard Griffiths). Things like this make me happy. Captain Fluelin is played by Owen Teale, a Welshman. The French are played by French actors, all of whom cope magnificently with the challenging text (I salute them: there are few English actors who would be able to tackle Molière or Racine in the original with such ease). As the Dauphin, Edward Akrout smoulders with arrogance and indignation, but he also gives the prince a measure of steely dignity that I felt was missing in Branagh’s version. I couldn’t decide whether his role was given more emphasis than in the other versions I’ve seen, or whether I just couldn’t help looking at him whenever he was on screen.

His sister, Katherine, looked very familiar and it wasn’t until the credits that I realised she was Mélanie Thierry, who was in La Princesse de Montpensier. I wasn’t thoroughly convinced by her in that film, but here she was delightful, blending girlish playfulness with convincing regal grace. Another Montpensier alumnus, Lambert Wilson, plays her father the King of France. And I was much amused to find out that Katherine’s maid Alice is played by Géraldine Chaplin, daughter of Charlie Chaplin and mother of Oona Chaplin (Robb Stark’s wife in Game of Thrones). A final small note on another piece of casting: Anton Lesser’s Exeter couldn’t be more different to Brian Blessed in the Branagh version, but I really liked his more reserved take on the character. He might not have made as convincing a warrior as Blessed, but I thought he made an excellent adviser and ambassador, full of courtliness and quiet resolution.

For much of the film I felt that Hiddleston was very understated and calm, with noticeable shifts between his usual measured delivery and moments of anger or emotion. It quite often felt as if he was speaking verse, rather than allowing the words to run along in a more natural way. Having said this, I thought he had an air of quiet dignity and self-possession that was very appealing and, crucially, he had the determination and charisma that you could well believe would make men follow him. For much of the film I thought him ‘good’, but in the final act – the wooing scene with Katherine – he suddenly blossomed.

This scene seems to be a gift to the younger actors who are playing Henry nowadays: Jamie Parker obviously relished it in the Globe performance I saw last year. And I’ve now seen it played three slightly different ways. Branagh, predictably, plays it with hearty jolliness; Parker turned it into a wryly comic masterpiece; and Hiddleston makes Henry almost shy, self-deprecating and very much on the back foot. He’s suddenly out of his depth in a situation where the language barrier hampers his eloquence, and he must deal with love not war. His initial uncertainty, which gives way to an impish self-mockery as he attempts to speak his mangled French, was absolutely adorable. It was the most romantic version of the wooing scene that I’ve seen to date and, by the end of it, Hiddleston had charmed me as thoroughly as  he did Katherine.

I think Branagh’s film remains the definitive screen version of Henry V for me, but this is an impressive adaptation and is certainly worth curling up with for a few hours. And, of course, those of you who’ve been considering Hiddleston for Lymond might find it a very interesting experience… Do let me know what you think if you’ve seen this! 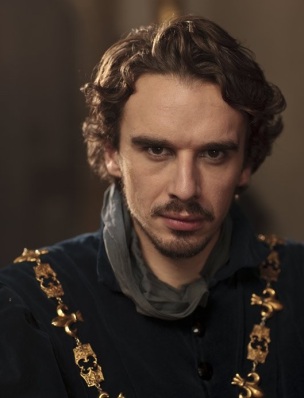