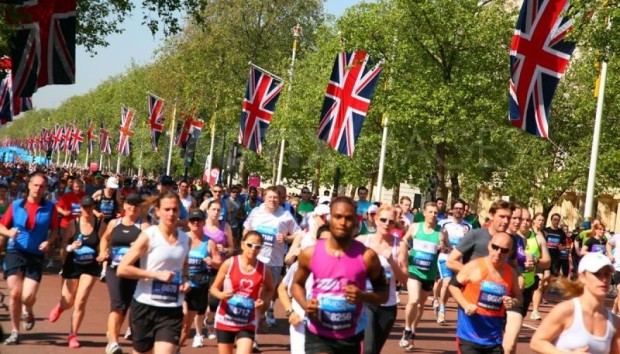 Yesterday in the centre of London it was almost 28 degrees (Celsius) and 10,700 people were crowded around me on the starting line, including (at the front of the pack) international athletes like Mo Farah, Jo Pavey and Paula Radcliffe.  I had never run a race before and the atmosphere at the start was electrifying.  I was somewhere near the back of the pack, along with the other charity runners and people dressed as dragons, dogs and superheroes.  My parents had warned me that the family honour would be dented if I was beaten by anyone dressed as a rhino.

The next hour proved to be a great test of my endurance, but it was also (eventually) one of the most exhilarating hours I’ve ever had.  We started on the Mall and ran through Trafalgar Square, along the Embankment, past Temple, St Paul’s, the Bank of England, Monument and the Houses of Parliament, and then we finished with a final 200-metre stretch up the Mall, with Buckingham Palace gleaming in the distance and Union Jack flags absolutely everywhere.  I can’t imagine a more inspiring or exciting course – and, thank God, it was mostly flat.

Along the route there was a jazz band, a reggae group, a fantastic team of drummers beneath the vaults of Leadenhall Market, and masses of charity groups and family members cheering us on.  Until yesterday I never realised how encouraging a simple cheer can be.  At 8km I was seriously starting to flag – I had run the whole way and I was damned if I was going to walk now, but it was very, very hard – and then suddenly I ran past the Cancer Research UK cheering post and everyone whooped when they saw my Cancer Research vest, and then suddenly I had an influx of energy.  And my parents camped out on the corner of the Mall at 9.6km to give me that final jolt of motivation.  I even managed a bit of a sprint finish, although my legs didn’t thank me for it afterwards.

I’d always said that I wanted to get round in less than an hour.  A test run last Tuesday morning took me 65 minutes, which was slightly dispiriting, and with yesterday’s heat I was afraid that I might be even slower.  However, the atmosphere worked its magic: I crossed the line with a time of 58 minutes 29 seconds.  It was completely awesome.  I now fully understand why people get the running bug.  Considering what my legs feel like right now, I dread to think of the after-effects of a half-marathon, but if the sense of achievement, the thrill and the experience is anything like yesterday, then it will have to be done. 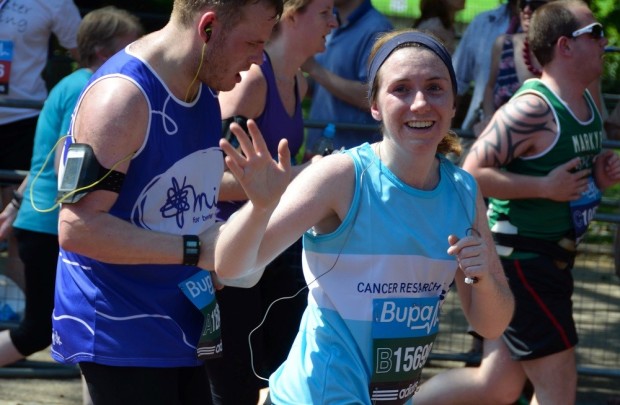 Back in January, when I signed up to run the London 10k, sport and I had been virtual strangers to each other for thirteen years, ever since my brief stint in the school orienteering team. I signed up to the 10k because my New Year’s resolution was to visit the gym regularly and I always feel more motivated when I have something to work towards. I wanted to run for Cancer Research UK because my grandmother successfully fought off cancer a few years ago and, although my immediate family has been otherwise very fortunate, we know a number of people whose lives have been tragically affected by cancer. And I liked the thought that any money I raised would go towards helping all kinds of cancer, not just breast cancer, which already has quite a high fundraising profile.  So.  That’s the serious part.

What I wasn’t expecting was how much I would come to enjoy running. Admittedly, I usually run on a treadmill in the gym; I don’t make the most of London’s parks; and I’ve yet to find a running partner, so it is rather solitary. But in a way that’s what I love about it. Three mornings a week I can close off my mind and simply run for a solid half an hour before work. My colleagues have commented that I’m much calmer and I feel so much better in myself. My whole outlook on life is just so much more optimistic; I feel that I can do more and I’m proud of how much stronger I have become. In running, I find the essence of how amazing it is to be alive and healthy, and what a fantastic thing the human body is.

A huge well done to anyone else out there who ran the race.

An aerial view of the 10k runners