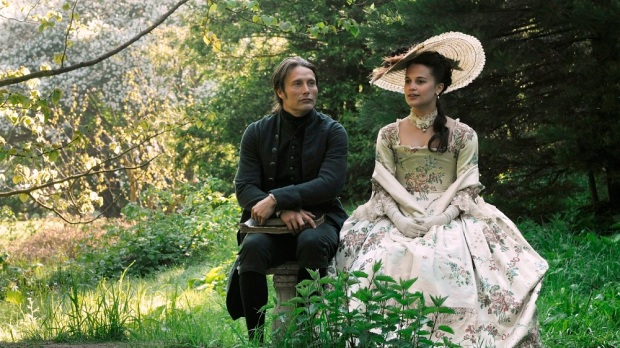 In 2006 I went to a talk at the Oxford Literary Festival, in which Stella Tillyard discussed her book A Royal Affair: George III and his Troublesome Siblings.  The book looked at the fates of George III’s various brothers and sisters, but the most memorable story within it was that of Caroline Mathilde, George’s youngest sister, who was married off to Christian VII of Denmark.  As this film has the same title, I assumed that it must have been based on the book, but there was no credit to Tillyard in the opening titles and there’s no mention of her on the film’s Wikipedia page.

Although it occasionally feels overlong, the film manages to engage you with the emotions and inner lives of its characters, something in which historical dramas don’t always succeed. I suspect that there has been slight simplification – at its heart, this is a fairly black-and-white tale of progressive, rationalist, Enlightenment thinking struggling against the regressive, defensive, intolerant and religiously blinkered status quo.  There are several plot strands, but this conflict between tradition and modernity is the theme which ultimately dictates the characters’ fates. 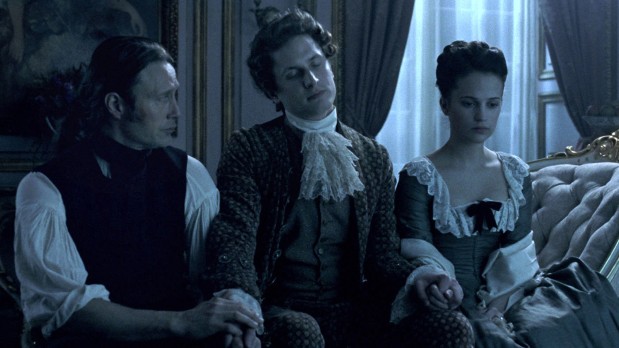 At the heart of the story is Johann Friedrich Struensee (Mads Mikkelsen), a small-town doctor in Germany with Enlightened sympathies, who happens to be on hand when Christian VII of Denmark falls ill during a tour of Europe. Two exiled Danish courtiers, Rantzau and Brandt, engineer Struensee’s appointment as Christian’s personal physician in the hope that he will be able to convince the king to introduce  progressive reforms – and, naturally, to recall them to Court. Back in Copenhagen, Struensee gradually makes himself indispensable to the lonely, afflicted Christian (Mikkel Følsgaard, who won Best Male Actor for the part in the Berlin Film Festival 2012). First, playing on the king’s distrust of his councillors, Struensee persuades Christian to introduce laws inspired by the writings of Rousseau and Voltaire.  This, which Christian sees only as a glorious game, marks the first step towards Struensee’s dream: making Denmark a flagship Enlightenment state. As Struensee pushes for greater modernisation of the state machinery, he naturally begins to make enemies; as he begins to dismantle the system which has kept the nobility comfortable for hundreds of years, he even risks alienating those, like Rantzau and Brandt, who share his Enlightenment ideals.

The other major strand of the story is, of course, a romance.  On his return to Copenhagen, Struensee not only charms Christian, but also captivates his queen, Caroline Mathilde (Alicia Vikander, only 24, but already with an impressive filmography).  Frustrated by her unbalanced husband and isolated from anyone she can trust, Caroline finds a kindred spirit in this idealistic doctor.  He lends her forbidden books; they discuss Rousseau and Voltaire; and he takes her out riding, showing his modern nature by encouraging her to sit astride rather than ride side-saddle.  And, just in case anyone in the audience wasn’t aware of what was going on, we then had the reliable ball scene, in which the two star-crossed lovers realise the other’s feelings while dancing, and have to bravely hide their emotions in slow-motion.  Like all good chess-players, Struensee takes the queen, and from then on he and Caroline Mathilde work together, sharing their Enlightenment ideals, to improve the governance of Denmark.  It is the perfect arrangement; at least, until Caroline finds that she is pregnant – and the child can’t possibly be the king’s. 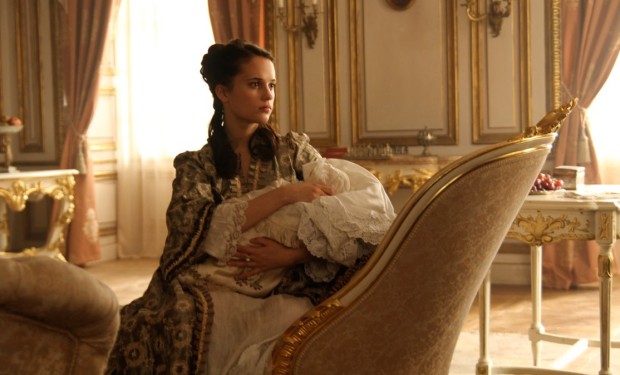 What interested me were the links between these two storylines and the way that the characters reacted to each other. Struensee came out of this film as a distinctly ambivalent figure.  As the representative of modernity and progress, I assumed that I was meant to be cheering him on.  But how far was he driven, from the beginning, by the desire for power?  How genuine is his apparent affection for Christian?  Does he indulge the king and keep him calm because he cares about Christian’s well-being and safety, or because by bringing Christian under his influence he can more easily take the reins?  Does he encourage Caroline’s affections because he loves her and appreciates her shared ideals, or because no sane man would refuse a queen, or because she too is a path to power?  As he takes on more of the running of the country, is this an example of a man working single-handedly to bring about change that will benefit everyone; or is it the old cliche of absolute power corrupting absolutely?

The questions become more pressing as Struensee finds retribution closing in on him.  (I should point out there will be spoilers ahead so judge whether or not you wish to read on.)  Let’s take one example.  Having abolished censorship, Struensee suddenly finds that hostile pamphlets are circulating around Copenhagen, lampooning his affair with the queen.  Does he stand up for his ideals and suffer the consequences of his mistakes, preserving the people’s freedom even though it’s directed against him?  Or does he try to protect himself by – grudgingly – bringing censorship back in?  The latter.  And what does that mean?

Mikkelsen plays it all extremely well.  As you well know by now, I like having a character whom I’m not sure whether to like or distrust.  He seems to be a pure-hearted reformer, but we never quite understand what’s going on behind that blank, polite face.  The most moving moment, for me (spoiler) was towards the end: a sequence in which there was no dialogue at all.  Struensee and Brandt, having confessed under torture, are being taken in a carriage to the site where they’ve been condemned to execution – but, they’ve been assured, Christian VII has intended to pardon them before the people.  Brandt is in good spirits, deeply relieved that his ordeal is over.  Struensee just watches the priest who is accompanying them.  He sees the way the priest nervously touches his crucifix; the tension in the priest’s face; and you see it dawn on Struensee, slowly, horribly and beautifully-done, that there will be no pardon.  Mikkelsen absolutely nails the scene.  His face barely changes, but you see him travel through all the stages of disbelief, horror, fear, resignation and accusation.  Absolutely superb. 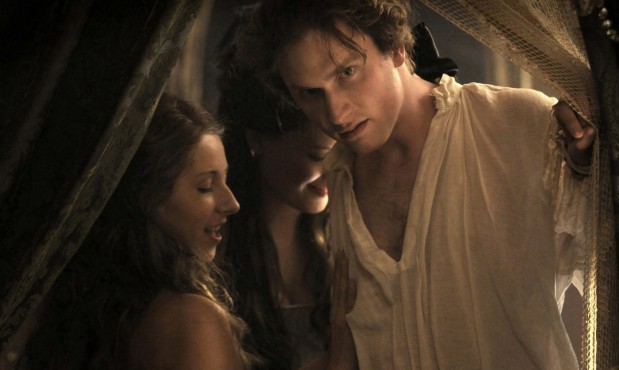 I’m a big fan of historical dramas that look real, in the sense of being dirty, gritty and plausible. This ticked all the boxes.  The city of Copenhagen was shown in shades of brown, its towers swathed in fog; and the scenes at the Court’s summer residence, or in the countryside, felt all the more verdant and free because of that.  The Court itself felt dark and claustrophobic, as befits a world in which a young queen is watched all the time, where servants spy and intrigue, and where true friendship is a rare commodity.  The costumes were wonderful, especially Caroline’s dresses, which were gorgeous confections of silks, ruffles and ribbons.

And I liked it all the more because the actors looked like real people.  Mikkelsen isn’t the most obvious romantic hero, but his Streunsee does have something strangely compelling about him; Følsgaard’s Christian is pink and white and slightly fleshy, looking exactly like someone from an 18th-century portrait; and Vikander’s Caroline looks as desperately young as the real-life queen must have been – little more than an anxious teenager.  To do justice to all this realism, the cinematography is languid and elegant, with long shots of faces or of profiles slightly turned away, of sunlight shining through hair or candlelight twinkling on diamonds.  This is a film to savour, to sit down with on a rainy afternoon when you haven’t anything you need to do.

Nikolaj Arcel is a young director but he is certainly able to create a thing of beauty, with an intelligent script and good performances from his actors.  It’s worth noting that he not only directed this but also wrote the screenplay – and he has a fine pedigree on that score, because he was also responsible for the screenplay of the original Swedish Girl with the Dragon Tattoo.  One to watch, I think. 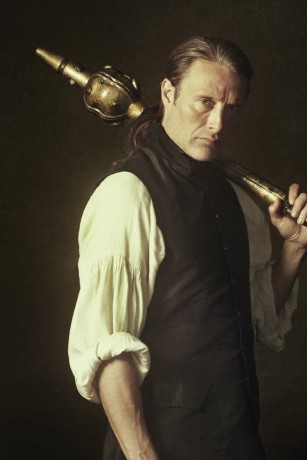 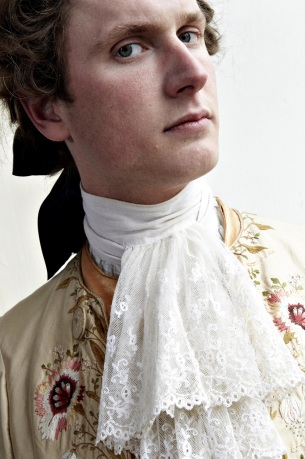