There’s been a rather exciting development in recent weeks. I’ve bought some art for my flat, in the form of wood-engravings by three artists: Sue Cave, Sue Scullard and Sue Woollatt (it’s complete chance that they share a first name). This is a momentous step for me: although I spend a good proportion of my life looking at art, I don’t own much. Indeed, what I have so far can be counted on one and a half fingers.

A few years ago my parents gave me an illustrated extract from On Looking into Chapman’s Homer (one of my favourite poems; long story), by the Bristolian artist Sarah Cowper. Before that, when I was in Florence at the age of eighteen, I had a not-particularly-faithful portrait of myself drawn in sepia chalk by a street artist in the shade of the Duomo. When I left home I gave it to my parents who, with familial tact, have kept it on the wall but subtly relocated it from the lounge to my old bedroom.  I’ve always hoped that one day I would be able to buy some proper art, but the problem is that I’m quite particular about what I like; and good art, to my chagrin, tends to be expensive.

A couple of weeks ago, seeking respite in the middle of a busy day, I went to the Summer Exhibition at the Royal Academy.  Usually I romp around the rooms in a state of gleeful indignation, rant to anyone who’ll listen about bizarre modern notions of what constitutes art, and then turn my attention back to the Old Masters.  A couple of years ago, however, I noticed some rather nice little woodcuts in the show; and last year I was very taken with one of Jane Lydbury’s mythological scenes. In the past twelve months I’ve consequently thought, now and again, that it would be nice to start collecting woodcuts. They’re small, suit the scale of my home, seem to be (relatively) cheap, and I like their simplicity and elegance. So, this year, I went into the Summer Exhibition on a Woodcut Mission.

I spotted one in the final room. It caught my eye immediately as I scanned across the wall: a slightly naïve landscape scene, showing a country path overarched with trees and dappled with sunlight, running into some woods.  I couldn’t stop looking at it.  I went away, came back, went away again, came back.  Checking the exhibition catalogue, I saw that there was an edition of 50 and that impressions were surprisingly affordable.  Reader, I gave in and bought one.  It is called How Still It Is…, by an artist called Sue Cave.  By sheer chance I’d been reading The Road Less Travelled that morning and this image reminded me powerfully of that.  Plus, the way the path disappears into a tunnel under the trees reminds me of the lane that leads into the village where I was born. That lane dips down underneath a canopy of oaks and horse-chestnut, running through a hundred yards of variegated shadow beside the stream and the old horse-troughs, until you emerge once again into the sunlight with the familiar cottages all around, and the village green just round the corner by the church.  Quite apart from all these associations, this little woodcut was just a very beautiful, serene, simple image, so I bought it.

I was so excited after buying Sue Cave’s wood-engraving that I decided I would take a proactive approach to finding some other art for my soon-to-be-revamped sitting room.  It’s amazing how reasonable these little engravings are, and I spent that same afternoon browsing the website of the Society of Wood Engravers, in a state of increasing acquisitiveness.  There were two artists whose work I particularly liked and eventually, after the Society failed to respond to my enquiry, I contacted the artists directly.  They both replied very quickly and were so friendly and welcoming; and, even better, they had the prints which I liked in stock.  Both of these ladies sent me their wood-engravings last week and I wanted to write about them here because they’re not only beautiful images but also fine examples of British craftsmanship. I’d like to do my bit to raise the profiles of these artists.

The first artist I spotted was Sue Woollatt.  Her wood-engraving caught my eye on the Society’s website because it was simply so adorable, and so unusual in its composition. It’s a frank, inquisitive portrait of the artist’s Jack Russell, Charlie, who looks as if he’s nosing up to the paper surface, hoping for biscuits. The sheet is dominated by his nose and large, pleading eyes, and beyond that he’s a lovable bundle of stubby tail, stumpy legs and optimistic ears. As I live on the third floor with no garden, I can’t have a dog of my own, so I decided that Charlie could fill that role for me for now.  Sue has very kindly agreed to let me post an image of Charlie here and she also directed me to her blog, where she talks about the process of starting out on this print.  To see some further discussion of her printing process, other examples of her work and exhibition news, here is a link to her most recent posts.  It’s always a treat to be able to speak directly to an artist and to find out more about their working process and their inspiration (the artists I usually deal with have all been dead for at least two hundred years).

Also on the Society’s website, I was struck by a very intricate engraving of Marcus Aurelius, by an artist called Sue Scullard.  When I found my way to her own website, I was delighted to see that she has a whole series of Roman emperors, which were commissioned by the Folio Society to illustrate The Lives of the Later Caesars.  One of them was Hadrian and I’m afraid that, as soon as I saw him, Marcus Aurelius didn’t stand a chance.  Ever since I read Marguerite Yourcenar’s Memoirs of Hadrian, I’ve had a soft spot for him, which was cemented by the British Museum’s super exhibition shortly afterwards; and when I travelled to Rome a couple of years ago I trekked out to Tivoli and spent half a day rambling around his villa in the pouring rain, while thunderstorms rolled off across the Tiburtine plain. Sue Scullard shows him with icons of his reign all around him: friezes of soldiers at top and bottom, and the Pantheon’s coffered ceiling and Hadrian’s wall behind him.

So, Hadrian jumped into my shopping basket and was swiftly followed by a wonderfully detailed view of Florence, a town which captured my heart as a Renaissance-loving teenager and which has continued to cast a benevolent shadow over my life ever since.  (She also has a view of Venice, but I have to pace myself somehow.)  Then there was a tiny but very lovely view of an unnamed Hill Town, which shows a little Italian town tumbling down a hillside framed with poplars. It was charming and, because it was part of an open edition and very affordable, I decided to buy that as well. Her art appeals to me because there is so much to see in a single image, so much detail and care and precision. Sue has also very kindly allowed me to post images of the prints I’ve purchased from her: if you like these, I urge you to pop along to her website via this link, because she has many other engravings in a similar style. I shall be watching her galleries with great interest. 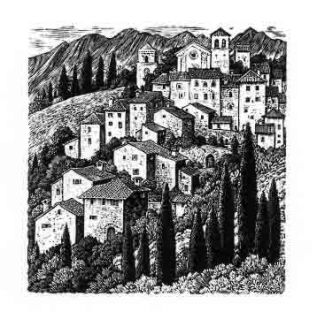 One thought on “Artists in Focus: Sue Cave, Sue Scullard and Sue Woollatt”