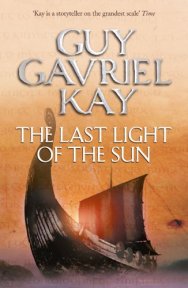 With the Lymond Chronicles behind me, it’s time to read some of the other exciting books that have been quietly piling up around my flat. First among them, without a doubt, was The Last Light of the Sun by Guy Gavriel Kay, and for that I have to say a big thank you to Susan, for her kindness.

Last Light takes us to the far north of the world that Kay has already described in The Lions of Al-Rassan and The Sarantine Mosaic. While it takes place in a very different environment from those sumptuous southern climes, it isn’t divorced from them. Allusions to the other books creep in here and there, in the form of an Asharite merchant from Al-Rassan or a conversation about the glorious mosaics in Sarantine sanctuaries. Here, on the edge of the world, such things are almost fables.

These are bleaker lands: consider the stony islands of the Erling sea-raiders, who go in their dragon-prowed ships to ravage the surrounding shores – and the mist-drenched lands of the Anglcyn and Cyngael, divided by mutual suspicion and by the vast forests that run down the spine of their country. In one sense, the book’s title refers to the Cyngaels’ geographical isolation: they are far to the west, the last to see the sun as it sets. In another sense, it suggests that here, on the borders of the sun’s power, the barriers between the newly-established faith of Jad (the sun god) and more ancient, primitive powers are most fragile.

The motif of triads runs throughout the book: there are three nations, three religions; and three storylines that form the main drive of the plot. Bern Thorkellson, shamed and cast into servitude by his father’s exile, decides on one dark night to steal a horse and escape from the Erling isle of Rabady. Across the sea in Cyngael lands, two sons of Owyn of Cadyr happen to be at the house of their rival, Brynn ap Hwyell, on the night it is attacked by Erling raiders. Both plot-strands unfurl against the broader story of the Anglcyn king Aeldred, whose entire life has been spent fighting to repel the Erlings from his shores and to bring peace and unity to his kingdom. His youthful achievements and status as a living legend lie heavily on the shoulders of his four children, especially the boys, who must inherit his burdens. There is an underlying theme, throughout, of young men trying to make names for themselves: sons trying to find their own way in the shadows of greater fathers.

As I mentioned in my post on Under Heaven, Kay often focuses on the way that a story can spiral out of a chance event or a spontaneous decision.  In fact, this concept is described here in a particularly beautiful way which ties back in to all his other work:

It happens this way.  Small things, accidents of timing and congruence: and then all that flows in our lives from such moments owes its unfolding course, for good or ill, to them.  We walk (or stumble) along paths laid down by events of which we remain forever ignorant. The road someone else never took, or travelled too late, or soon, means an encounter, a piece of information, a memorable night, or death, or life.

And, underlying all of that, there is faith – which plays a very significant role here. In one respect, the faith of Jad provides the foundations upon which Aeldred’s kingdom is built, and from which he draws the strength to fight the Erlings. But Aeldred and his peers are acutely aware of what Jad’s laws supersede; of what is weaker and fainter than it was, but still undeniably present. In this book there is a closer connection to the spirit half-world than in either The Lions of Al-Rassan or The Sarantine Mosaic. Speaking for myself, I’m in the ‘less-is-more’ camp. This is due to my own worldview, and to the fact that I tend to approach Kay’s works as alternative historical fiction, rather than fantasy. The Sarantine Mosaic enthralled me so much because its mysticism is never fully explained: strange things happen; there are glimpses of powerful forces; but it’s as if there’s a veil between the otherworldly and the real.

Parts of Last Light evoke the same sensation, particularly the episode in the wood, with the unseen, malevolent, ancient presence. This worked immensely well because the mystery remained intact: personally, I had my money on it being a rogue zubir, but I could be wrong. Again, a similar feeling was suggested by Alun’s first vision of the Ride. I found it a bit more difficult, however, to accept his more prolonged interaction with the faerie. To bring an otherworldly being so close ‘to camera’ somehow disrupted the delicate balance of the mood.

I’ve heard that some people have found this book quite challenging because it owes a lot to the influence of its sources of inspiration: Viking sagas and Anglo-Saxon chronicles. It isn’t as fluid as the other books, that’s true, but I’m sure that’s deliberate. The sentences are short and staccato; where longer sections can’t be avoided, they’re broken up by semi-colons and ellipses. Perhaps the most obvious debt to this form comes in Attor’s rendition of the ‘Last Song’, with its breaks in the middle of the lines, so characteristic of Anglo-Saxon literature. I felt on a couple of occasions that some of the dialogue, particularly of the younger characters, felt a bit too informal or colloquial in the context of these careful decisions about the form.

Presumably the saga form is also responsible for the large cast of characters and the frequent jumps sideways to briefly follow the stories of those whose lives brush up against the central action. It does mean that we meet a lot of characters in a short space of time, and even some of the protagonists are not as individually defined in the mind’s eye as they might be otherwise; but nevertheless I liked it. I also enjoyed the occasional asides, in parentheses, which reinforced, undermined or added a rhythmic quality to the story, as I imagine might be the case in the original sagas. The form is an experiment, a challenge. And the story as a whole has opened an interesting door on lots of other areas I’d like to explore.

Since finishing Last Light, I’ve reread Beowulf and tried to find out a bit more about Alfred the Great, his reign and his family. (I am deeply disturbed, though, to discover that blood-eagling was a real Viking practice.) Thanks to this extra reading, I begin to suspect that Judit – who I thought was one of the most interesting characters – might end up making her mark on history after all. I’d hoped that there might be some way for her to become a leader in her own right. We’re given a brief glimpse into her future as ‘the Lady of Rheden’, which suggests that she might be a fictional mirror of Æthelflaed, the Lady of Mercia, who governed alone after her husband’s death. Fingers crossed. I’d also like to find out more about the genesis of English fairy-lore.  I was intrigued to think that such tales, about the fairy queen stealing the souls of mortal men to join her court, went back so far.  Mind you, I’m no scholar: my knowledge of these stories derives mainly from Fairport Convention’s Tam Lin…

I never studied Anglo-Saxon literature or history at university, but I’m beginning to feel as if I missed out on rather a lot. All suggestions of other good books on this period would be very welcome!

I received a copy of this book from the publisher, in exchange for a fair and honest review.