Venice, 1571. The Serenissima, at the head of the Holy League, has defeated the Ottoman Empire in the Battle of Lepanto and the great Republic turns to the artist Galactia (Fiona Shaw) to immortalise the victory in an immense canvas. They are taking a risk: outspoken, liberal Galactia is no state catspaw. Sickened by the slaughter at Lepanto, she decides to turn the triumphalist canvas into a seething denunciation of war: a tumult of flesh and violence, blood and severed limbs. This will be no vision of Christian victory, but an accurate representation of a battle whose rate of slaughter wouldn’t be equalled until the First World War.

Naturally, as the painting takes shape, the consequences ripple outwards: her weak, selfish lover Carpeta (Jamie Ballard) resents her absorption in the work; her patron, the Doge Urgentino (Tim McInnerny), frets about what this will do to his public approval ratings; and the vaguely threatening figure of the critic Rivera (Phoebe Nicholls) waits to pass judgement on the art and the artist. The play is an exploration of the tension between artistic responsibility and social responsibility, between duty and morality, between painting a rich man as he wants to be painted and painting him as he is. Galactia will not compromise her principles for the state, instead expecting the state to compromise its principles for her. In her passion for truth, she threatens to obscure the niceties of interpretation by which the Republic makes war palatable to its people – here there is no glory, no valour, no redemption by faith – thereby striking at the very heart of the Serenissima’s conception of itself.

Whosoever in writing a modern history shall follow the Truth too near the heels, it may happily strike out his teeth.

As a confident, outspoken woman, Galactia is something of a rarity in 16th-century Venice and she has taken advantage of her freedom to make her own rules. She has an almost masculine swagger and unshakeable self-conviction, while also celebrating her sensuality through her relationship with Carpeta, which inverts the usual gender roles. (Indeed, many of the characters’ names come from a playful cod-Italian: it’s hardly surprising, perhaps, that Carpeta always ends up being walked over by other characters.) Galactia is one of the most  strikingly rich and self-confident female characters I’ve come across for a long time, and I think part of the reason she impressed me is because she doesn’t seem to have a chip on her shoulder about being a woman in a man’s world. She deals with men frankly and with tolerance and with a rather wicked sense of humour; and rather than fade into the ranks of the flower-painters or the drapery-painters, or any other genre favoured by female artists (like her put-upon daughter, Supporta), she paints in a visceral, violent style that outdoes her male colleagues at their own game.

As she blazes a trail, the male artists bicker and bitch and seek to repair their dented vanity by suggesting that her work is flawed: that her vision of male stupidity in war is a kind of revenge upon all men, and that the faces of the dead and dying are those of her discarded lovers. Her patrons, on the other hand, know that this tumultuous woman is a genius and that her painting achieves something that none of her contemporaries can attempt (poor Carpeta, for example, who is only capable of turning out version after version of Christ among the Flocks). Here is the other underlying theme: about the relationship between the artist and the critic, between the present and posterity. Rivera, the critic, provides the point of view of someone who can step outside the moment in time and see beyond the inflammatory provocation of Galactia’s picture, to a point in the future where the painting will speak of the greatness of Venetian art, rather than that of Galactia herself. Time tames all art; and something which is unprecedented, in its very act of being, creates a precedent that will in time lead to the loss of its shock value.

I haven’t seen any of Howard Barker’s work before and this play, first performed in 1985, rapidly won me over with its colloquial, irreverent script. The cast handled it brilliantly and Fiona Shaw spoke her lines so naturally that she could have been improvising. She was on stage virtually all the time, a captivating presence. Tim McInnerny was the other highlight for me: I hadn’t realised he was in the cast and he turned in a performance of comic naturalism, laced with exasperation, as the long-suffering Doge. He strikes a blow for the other side of the story, which we so rarely get to see: the poor patron who has to deal with these wretched artists, who never get anything done on time and are always demanding indulgences or ignoring the terms of the contract. As these two were so natural that they seemed to be ad-libbing, they made it more obvious when someone else was obviously performing lines. Much as I adored Phoebe Nicholls as Cordelia in Brideshead, I found her to be a little stiff here, proclaiming her lines rather than living them… but perhaps that was deliberate, in the sense that critics do proclaim; that’s what they’re paid to do…

The set and costumes were very simple, historically-inspired rather than historically accurate. In fact, the set consisted of two large walls which could be turned this way and that, and a large screen which represented Galactia’s canvas. The imagination fills in the rest. Fiona Shaw spent most of the time in a revealing smock, and the other outfits veered between Rivera’s contemporary ensemble and the accuracy of the Doge’s or cardinal’s robes. Personally, I always like seeing proper historical dress because I love the history of costume, and I see that on previous occasions the play has been presented in 16th-century style. But in this particular case I don’t suppose it matters too much; we had a flavour of Venice, and that’s all we needed to enjoy the text.

Knowing more about Barker’s philosophy and beliefs, The Guardian thinks that the production has let him down. Perhaps this is a fine example of the critic’s viewpoint versus the public’s viewpoint, which is such an overriding theme in the play. The Guardian looks on Scenes from an Execution as part of a wider puzzle, and their assessment is informed by social and theoretical arguments, and by a sense that the play must be explained as part of an artist’s oeuvre. Coming to it with no background knowledge and no expectations, I looked on it as the public must have looked on Galactia’s painting: judging it simply on its power and its story. And I enjoyed it: as a story about the individual versus the state in this period, it reminded me of Brecht’s Life of Galileo. Besides, it’s worth seeing for Fiona Shaw’s performance alone. 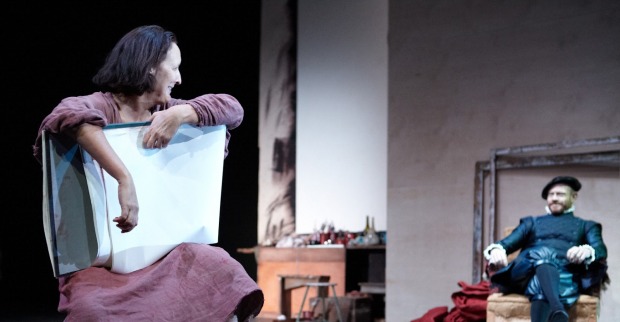