Fresh from high school, Calvin Weir-Fields (Paul Dano) wrote a book that was hailed as one of the great American novels, earning its writer comparisons with J.D. Salinger. Ten years later, he’s still trying to write his second novel, lost in a fog of self-pity which is alleviated by weekly visits to his therapist and apathetic walks with his dog Scotty. His therapist suggests that Calvin just tries to write something simple: a scene in which someone stops to admire his dog. In Calvin’s imagination, the girl who admires Scotty turns out to be everything that he, Calvin, desires in a girlfriend. Inspiration flows and the narrative becomes less of a story and more of a wish-fulfilment.

In real life Calvin is awkward, unsociable, self-centred and narcissistic, but in his manuscript he enjoys a blissful relationship with the quirky Ruby (the multi-talented Zoe Kazan, who also wrote the screenplay for the film). Everything is going swimmingly for Calvin until strange articles of female clothing start appearing in his house; and then one morning he comes downstairs to find Ruby. In his kitchen. Cooking breakfast without the slightest awareness that she isn’t supposed to exist.

Once Calvin has established, to his surprise, that she does exist and that other people can see her, nothing stands between him and the exhilarating relationship of his dreams. Ruby brings colour and clutter into his minimalist, rather soulless apartment, charms his family and encourages him to have fun again. As time goes on, however, the difference between ideal fantasy and flawed reality makes itself apparent. Calvin has created a living, breathing character (literally) and – as many writers might sympathise – she has her own opinions, which don’t necessarily coincide with those of her creator. Furthermore, she begins to show worrying signs of wanting to develop an independent life.

Calvin (Paul Dano) at his typewriter

What she doesn’t realise is that, by tinkering with his manuscript and adding further directions, Calvin can fine-tune her to his liking. Initially this is harmless enough – making her speak in French rather than English, to prove a point to his sceptical brother Harry (Chris Messina). But later on, Calvin realises that the power can allow him virtually unlimited control over Ruby’s emotional state, actions and attitude. And you know what they say about absolute power…

It’s just such a wonderful idea. Similar concepts have been tried before – Inkheart, for example; and I suppose Frankenstein isn’t a million miles away in its basic premise – and Ruby Sparks actually shares something with the latter, rather unexpectedly. The dramatic force comes from the tension between creator and created, although here Ruby has no idea that she’s just exploded into existence. She has a whole backstory mapped out in her head and, like the rest of us, she believes that this is real. There were some things (of a mildly spoilerish nature) which were never really answered in the film, which niggled me afterwards. If Calvin had burned the manuscript, what effect would that have had on Ruby? Would it have burned her, utterly destroyed her or freed her? Ruby speaks at one point about her apartment: does this actually exist, or does she just think she has an apartment? Likewise, did her childhood, family and friends come into existence when she did? If you went to Dayton, Ohio (a playful nod to the director?), would you find people who remembered Ruby; or has she only existed from the moment she sprang into being, fully-formed, in Calvin’s flat? On the other hand, you could make a perfectly good case that I’m taking this too seriously. 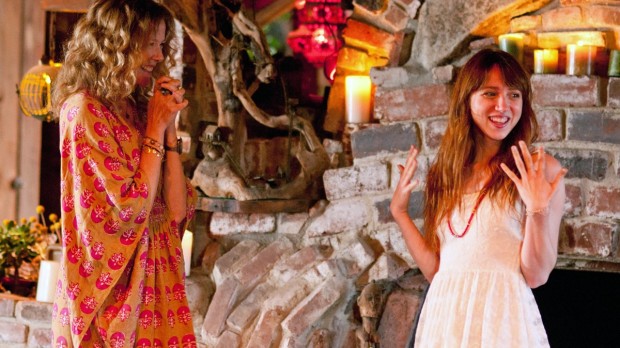 As the poster makes very clear, this comes from the directors of Little Miss Sunshine, but  it doesn’t deliver quite the same flavour. Ruby Sparks has its moments of comedy and a similar sympathy for those who live a little outside the norm, but it’s a bit darker than Sunshine. On the surface, certainly, there’s plenty of colour and laughter – Calvin’s family provide the requisite eccentricity, in the form of his new-age mother (Annette Bening) and her expansive, furniture-designer partner (Antonio Banderas). But there are some fairly unpleasant questions simmering under the surface about ethics in relationships – about how we assume that we know someone and expect them to stick consistently to that limited character – about how we have to give people space to be themselves – and about how we resolve differences (not everyone has the option to retype their partner to erase unwanted foibles).

I have to admit that I didn’t fall in love with this as much as Little Miss Sunshine (or Inkheart), largely because I didn’t find Calvin a very sympathetic character. Nevertheless, I always enjoy films about writers and the act of writing, and Ruby Sparks throws some very clever ideas into the mix. I also find it rather fun that Kazan, as well as playing Ruby, created the character of Calvin through her screenplay; and that Kazan and Dano are, apparently, girlfriend and boyfriend in real life. Such facts add a little extra level of frisson.

It’s a good addition to the growing subgenre of smart indie romance, along with films like (500) Days of Summer and Eternal Sunshine of the Spotless Mind. It’ll be interesting to see what other gems Kazan comes up with in the future (let’s hope we don’t have to wait as long for her next screenplay as Calvin’s fans did for his second novel). 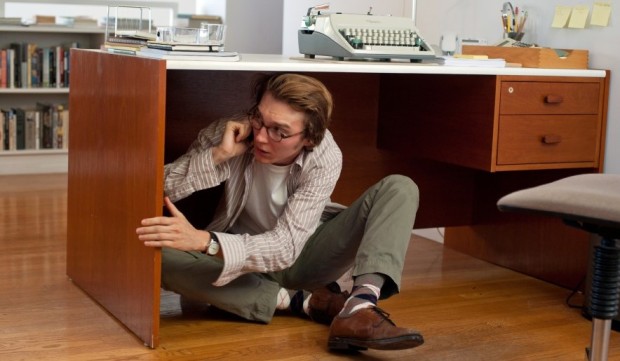