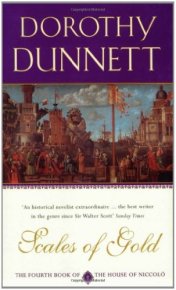 The House of Niccolò: Book 4 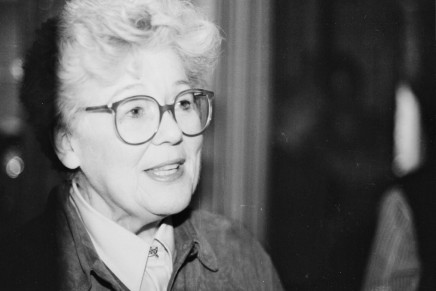 The House of Niccolò: Book IV

As I’ve said before, I’d already read the first three books of the House of Niccolò series, up to Race of Scorpions: this novel and its successors, by contrast, are gloriously fresh and new. During the last three books, I have to admit that I missed the breathless sensation of reading a Dunnett novel for the first time. Fortunately Scales of Gold has more than lived up to my expectations in that respect. Within the first hundred pages there is pomp and pageantry, a mass reunion, espionage, an attempted assassination, a death, a mysterious visit to Murano and the prospect of complete ruination for Nicholas’s bank. And that’s even before he unveils the main thread of the plot, more ambitious and dangerous than any of his previous escapades.

So far the story has played itself out within the confines of Western culture, but Europe is growing too small for Nicholas. Visceral and epic in every sense, Scales of Gold lures us south, to the African civilisations in the Gambia and Mali and along the trade routes to Timbuktu and the vast sweep of the desert. Here Nicholas comes, lured by curiosity and gold, to establish a fortune for himself and his bank and perhaps even to press east, further than any European has ever been, into Ethiopia in search of Prester John. But he neglects to consider the cost that such a journey might exert on those who travel with him;  and the transformative effect it could have even on him.

There’s an air of high adventure about this novel which differentiates it from the previous two, in which martial and political matters drove the plot; and, in the early parts of the journey at least, it recaptures some of the light-heartedness of Niccolò Rising. Surging south by roundship or caravel (which, incidentally, is a lovely word), racing against the ship of their rival traders, Nicholas is separated from all his usual companions except Father Godscalc, who doesn’t trust him, and the enigmatic Loppe, whose friendship and duty will be tested to the utmost.

At Nicholas’s side, against all his expectations, are two people he would have given a great deal to leave behind: Diniz Vasquez, who hero-worships him, and Gelis van Borselen, the younger sister of Katelina, who is determined to learn the truth about her sister’s death and Nicholas’s role in it. Gelis is accompanied by the glorious Bel of Cuthilgurdy, whom I imagine to share something of Dunnett’s own happy essence: good-natured, sharp-witted and with a wicked sense of humour. In the best spirit of adventure stories, this little band is forced to put aside their differences as they leave behind the world that they know and enter a rich, dizzying paradise of strange animals and trees, where drums echo in the dark and all the senses threaten to be overwhelmed. Along the way there is some fairly gruesome violence and several occasions when we’re left in limbo about whether or not favourite characters are dead. One will be, by the end.

As usual, there’s a vast amount going on and I’m sure that I’ve missed things. Knowing nothing about African history or culture in the fifteenth century, I was first and foremost impressed by the exotic descriptions and the unfamiliar customs. Whether she’s describing Scotland or Trebizond or the Gambia, Dunnett’s world is always completely convincing. The characters, too: it’s fascinating, after finishing one of her books, to go back to the list of dramatis personae at the beginning and to see which of the characters actually existed and who is simply a product of her imagination. It can be virtually impossible to decide simply from reading the book; and that, needless to say, is precisely the mark of a good writer. The settings are as vivid as ever, despite their unfamiliarity. Timbuktu especially intrigued me: this city of scholars, bibliophiles and merchants, like an island on the edge of the desert, where Nicholas finally discovers the inner peace which has eluded him for so long. One of the passages I found most beautiful grew from this:

Now they were but seven pepper-seeds upon an ocean which stretched, white as curds, to the rim of the universe… And as the sun rose, disclosing the scalloped forms of the dunes, and sank, a vast glory at night, Nicholas experienced the liberation he had not so far been vouchsafed in his life.

From now on there will be spoilers, or suggestions thereof, because (as anyone who’s read the book can imagine) I can’t resist talking about one of the main characters: a case in which I think Dunnett played her hand very well. Gelis turned out to be much more interesting than I initially thought she was. Certainly, from the start, she was intelligent and refreshingly frank and one of the few people able to deal with Nicholas at his own level. You might not be surprised, after my comments about Nicholas’s effect on women in my previous post, to hear that my heart sank when Gelis began to soften towards him. Is there ever to be a significant female character in this series, I asked myself, who doesn’t eventually end up in bed with Nicholas?

Please don’t misunderstand me: I was content as we came towards the end of the novel. Nicholas was on track to finally make an appropriate marriage, settle down, have masses of children and become a pillar of society. When I like a character, I want them to have a happy ending and it would be churlish to grumble about everything being tidied up so neatly. (However, if there had been a double wedding with Diniz and Tilde, I might have started to worry that Dunnett was veering into heartwarming  Jane Austen territory.) I did wonder, fleetingly, how the next four books were going to unfold if Nicholas was ensconced in domestic harmony in Bruges.

And then: bam! It turns out that Dunnett’s world still has teeth and sharp wits, and isn’t as snuggly and rose-tinted as it might pretend to be. And Gelis – thank God, perhaps – has a firmer, more ruthless sense of purpose than I ever imagined. I’d been completely misled; and I was glad of it. The only scene in the novel that rivalled this for satisfaction was Diniz’s reception of Simon on the deck of the San Niccolò, which was a glorious coup for Team Nicholas. I may have cheered.

Let me explain a little more. If the book had finished as I was expecting it to, that would have been all very nice for the final novel in a series, but it would have been a bit tidy for the end of a fourth novel with four more left to go. If Nicholas had finished off in a golden glow of marital bliss, I might have felt that my engagement with the story, at least temporarily, had been neatly tied up; I might have turned to The Agony and the Ecstasy, for example, which is sitting there, just waiting for a slot to be reread. As things are… well, I think I can consider myself hooked in masterful fashion. Next up is The Unicorn Hunt, which intrigues me for two reasons. First, because the Dunnett Society are selling a rather pretty unicorn brooch and I want to know what the significance is; and secondly because this is the first of the books that departs from the openly astrological scheme of the titles. Thinking outside the box, all I can come up with is that, if you’re going to hunt a unicorn, you need a virgin to catch it – so presumably it represents Virgo in the greater scheme of things?

Last in this series: Race of Scorpions

Next in this series: The Unicorn Hunt