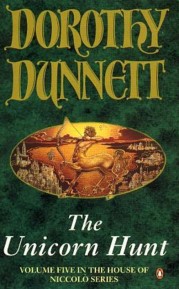 The House of Niccolò: Book 5

The House of Niccolò: Book V

It is a truth universally acknowledged that, just as you have a favourite book in a series, you’re likely to have a least favourite; and this is mine. Please be cautious if you haven’t read it because, later on, I won’t be able to avoid spoilers. For me it’s the least successful Niccolò book for the same reason The Disorderly Knights dissatisfied me: the story hares from place to place, never quite managing to take root.

In the later part of the book, I found myself dragged at a dizzying pace from Bruges to the Tyrol and then on a tour of various picturesque spots encompassing half the Mediterranean and Egypt. In each place there was a torrent of facts, throwaway references and apparently idle conversations; although I have learned never to underestimate Dunnett’s idle conversations. If The Disorderly Knights is any guide, these will coalesce to provide the driving force for the final three books of the series. But, although I may look back at the end and admire the foundations laid in this novel, it is not a satisfying book to read in its own right.

The usual Dunnett novel, as fellow fans will know, is built around a delicious but manageable flurry of action, intrigue and adventure; here these things are extended to such unprecedented complexity that I now really have no idea what’s going on. Throughout the book I found lots of allusions to the plan, the game, but I’m still none the wiser as to what it is; and I can’t make out which moves are initiated by Nicholas, which by Gelis, Adorne or the agents of the Vatachino, and which by the ubiquitous Fra Ludovico. Much of what happened felt less like a plausible development of what had come before, and more like an excuse for melodramatic encounters in exotic places (I was  bizarrely reminded, several times, of Indiana Jones).

The main theme of the book is, of course, hunting. The unicorn of the title refers explicitly to the Scottish Order of chivalry with which Nicholas is invested, to signify his increasing importance to the King. Implicitly, it perhaps refers metaphorically to Gelis’s child, which Nicholas seeks so ruthlessly throughout the book. The child may or may not exist, may or may not be healthy, and for most of the book is to all intents and purposes as mythical as the unicorn. That particular story arc, when I came to the end and could reflect on it, was very satisfying (the end, rather than the means) – and of course there were strong echoes of the superb Pawn in Frankincense.

The other hunt which drives the action of this novel is a hunt for gold: Nicholas is one of several people searching for the gold from the Ghost, which disappeared in the last book. His rivals include Anselm Adorne and his party, including his rather engaging niece Katelijne.  You may not be surprised to hear that I warmed to Katelijne who, let’s be honest, seems at the moment to be merely Philippa under another name. (As an aside, I wonder if there is a reason that the name Catherine, in all its permutations, arises so frequently in this series: Katelina; Katelijne; and Catherine de Charetty, of course.) Katelijne’s escapades, particularly with the kite, added a much needed lighter note and in fact she’s virtually the only character I really liked this time.

At the moment I can’t warm to Nicholas, who is no longer the amiable character I grew fond of in the first couple of books. Although you could explain the motivation behind his vicious battle with Simon, for example, it still felt out of character; as did his later interaction with Adorne. Even the other characters kept observing how much Nicholas had changed, almost as if they couldn’t quite believe it either. I desperately hope that he recovers some of his warmth and equanimity, because much as I enjoy following a character with a cause – and Nicholas has that in spades – I miss the qualities which made him so rich and memorable in the first place.

Let’s return to the central theme of hunting. Of course, other things are hunted this time as well: seams of precious metals; and people. And this brings me to the plot development which I found most frustrating: the divining. The reason I’ve grown to love Dunnett’s work is because she gives us characters who battle with their wits and test one another’s intellectual capacities. To have it suddenly stated, halfway through the fifth book in an eight-book series, that Nicholas has ‘special powers’ – giving him the ability to divine not only water, stone and various types of metal in the vicinity, but also the presence of certain people either by proximity or from a map – gives him an unfair advantage and completely undermines the values of the rest of the series.

This is not the time or place to go into my feelings about divining (which can be summarised as sceptical), but I was taken aback to find a supernatural power suddenly playing such a key role in a series which had, until this point, been rational and gloriously character-driven. It’s true that there were echoes of the supernatural in Lymond, with the Dame de Doubtance, but at least that was subtly enough done that doubters like myself could rationalise the events. The only explanation I can find for the introduction of Nicholas’s gift is that Dunnett suddenly realised she had plotted her hero into a corner that he couldn’t get out of without the aid of a deus ex machina. I might feel slightly less disappointed if there had been some hint of a possible supernatural element from the beginning – a hint, I hasten to add, that was noticeable to a first-time reader, rather than to someone who knew to look for it.

So I finish this instalment of the House of Niccolò with some misgivings. I have stated them honestly, in the full knowledge that some people will disagree with me. One of the joys of life is that we all have different opinions, and I’m sure that some people dislike some of my favoured instalments and characters. So let’s review where we stand now. Once again we’ve been left with a cliffhanger, which followed on the heels of gorgeous descriptions of Venice during Carnival. (Am I the only one who saw echoes of the Bruges Carnival night on which Katelina and Nicholas met?) From now on, I hope that the plot will begin to become less complicated, and that Dunnett will begin to grant us more of an overview of her intricate design. From a personal point of view, I would be very glad if the obnoxious child Henry gets some form of comeuppance, and I would also be glad if the divining were to take more of a back seat. Dunnett doesn’t need it: I have read eleven of her books now, gripped by her splendid, accurate historical fiction. It would be a shame, for me, if that changed now. But I’m looking forward to starting on the next book, in which no doubt there will be some answers – and many, many more questions.

Last in this series: Scales of Gold

Next in this series: To Lie with Lions