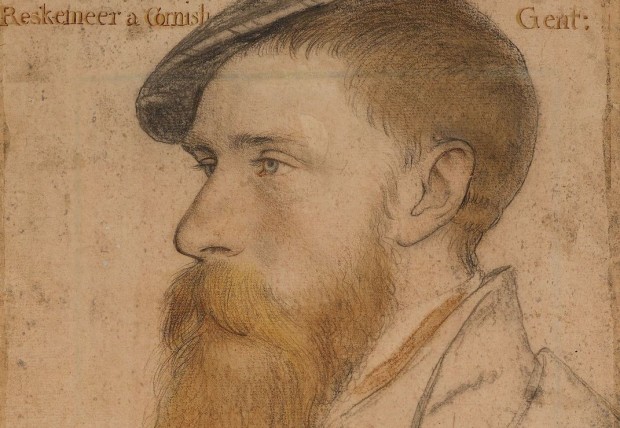 Back in 2008, the Queen’s Gallery put on the splendid exhibition The Art of Italy, in which the Royal Collection showed off its wealth of Renaissance and Baroque Italian paintings and drawings, assembled over four hundred years by an Italophile monarchy. It was the first exhibition I saw at the Gallery and I remember being amazed by the richness of the Collection’s holdings. The Northern Renaissance is the natural successor to that 2008 show and, while it includes some glorious objects, it is of necessity a more modest exhibition than its predecessor. It comprises 110 exhibits (compared to The Art of Italy‘s 153), of which 22 are prints rather than unique works and seven are arguably Italian rather than Northern.

Now, on one hand this reflects the collecting habits of the British monarchy (and of the British more generally), for whom works by Northern artists have always exercised less of a compulsion than those by Italians; but on the other hand it indicates the need to blur the usual separation between North and South, in order to fully understand the scope and meaning of the Renaissance.

The show is divided up into four rooms: an introductory gallery; a room devoted to Dürer and other artists from the Holy Roman Empire; the Netherlands; and finally Holbein, who shares his gallery with representatives of the French Renaissance. Dürer is represented primarily by his prints (the exceptions being his Venetian-period oil Portrait of Burkhard of Speyer and four pen drawings), but there are few artists who shine so brightly through a monochrome medium. This was the first time that I’d seen so many of the Apocalypse woodcuts together and, as a group, they exert an unsettling power: their lines are thick and muscular, their tumultuous compositions nightmarish and still very medieval in spirit. Personally I prefer Dürer’s engravings, which in their best impressions have rich, velvety black shadows and exquisite details. My long-time favourite, A Knight, Death and the Devil, was here; but I was also very struck by the much smaller print showing St Anthony. The hunched figure of the saint at lower right is echoed by the triangular form of the hill-town rising behind him; the large expanse of sky is left empty, pierced only by the saint’s monumental crucifix. Of all the things I saw, I think this – oddly enough – is the one I would have liked to take home with me. 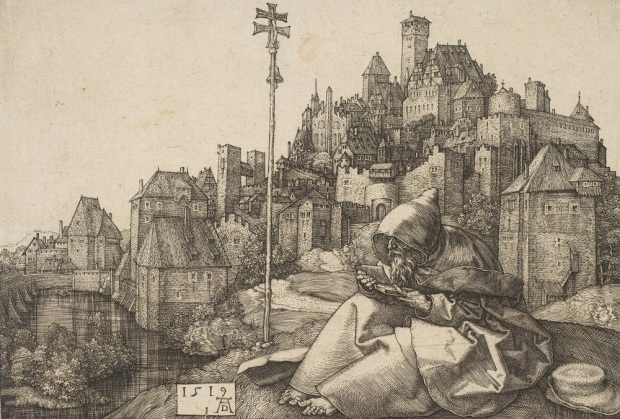 However, the decision to display so many of Dürer’s prints isn’t just an excuse to revel in his stupendous technical skill. It also shows that he was something of an entrepreneur. He took advantage of the new technology of the printing-press, which enabled him to spread awareness of his work across Europe, and he also ensured that his name would become famous along with his compositions. Unlike virtually every other artist at the time (and for centuries afterwards), Dürer conscientiously signed everything – paintings, prints and drawings – with his characteristic monogram, often accompanied by the date. Here was a man, in true Renaissance spirit, fully convinced of the importance of the individual.

Among the works by Dürer’s contemporaries, one picture in particular caught my eye. The Portrait of a Man and his Wife, painted by Ulrich Apt and his workshop in 1512, isn’t even the prime version: it is one of two copies of an original painting in the Schroder collection in London. But it’s an oddity, and I do like oddities. First, the husband and wife are painted on a single horizontal panel, rather than each having their own individual panels (which would be displayed together as pendants). I don’t know many portraits in this format. It is arranged so that the husband is set against an extensive landscape, showing his active role in the world, while the wife sits shielded by the wall, to suggest her task lies within the home. Secondly, there is something rather moving about this bridal couple. Both the husband and wife are past the first flush of youth: the man is 52 years old; the woman 35.  Even if they both look slightly severe (and at the risk of reading too much into a portrait), I would like to think that this is second time round for both of them: perhaps, finally, a marriage based on affection. (Funnily enough, I’ve just spotted that the curator Kate Heard will be giving Valentine’s Day talks about this, along with other marriage portraits from the Collection, on Thursday 14 February 2013 at 12 noon and 3pm.)

The Netherlandish section is arranged in the Gallery’s grand hall, which has been put to very good use with the display of two large tapestries. One, titled Peace and Mercy win the Promise of Redemption for Man, dates from around 1520 and represents the Virtues’ doomed efforts to protect Mankind against the lure of the Vices. There’s a wonderful detail at lower right in which, having gained a temporary reprieve for Man, the Virtues present him with armour to defend him against Vice; and yet it’s no good; in the background, we once again see him being overwhelmed by pretty girls and lascivious music while, behind him, faithful Spes lurks with a club in the hope of preserving him. 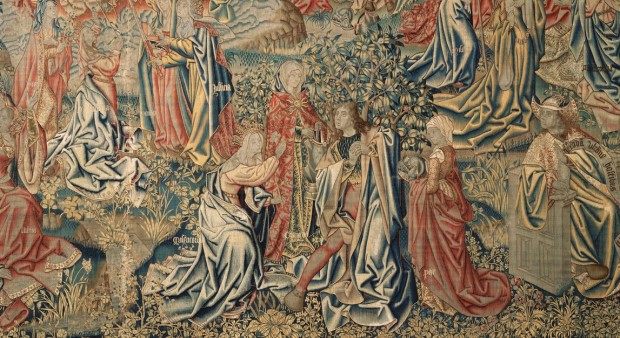 Peace and Mercy win the Promise of Redemption for Man, tapestry (detail)

Here there lingers a hint of the medieval mindset, in its traditional way of allegorising man’s struggle towards goodness and fulfilment. But the exhibition implicitly contrasts this with the new ideas about morality which were drifting north from Italy. To my delight, the exhibition included editions of works by three seminal Renaissance thinkers, all printed within a few years of each other and all designed by Hans Holbein the Younger. There was Sir Thomas More’s Utopia (1518); Erasmus’s Latin translation of the New Testament (1522); and  Poliziano’s Letters and Miscellanea (both 1522). It was a beautifully clear example of how Renaissance culture was neither Italian nor Northern, but formed through exchanges of ideas across the Alps.

Finally, of course, there is the Holbein room. The Royal Collection has the best holdings of his work in the world, especially as regards the wonderful series of preparatory drawings he made of his sitters. Some patrons, such as Sir Henry Guildford and William Reskimer, are represented here in preliminary sketch form and finished picture form, so we can judge whether Holbein was moved to flatter them in the final image. As ever, though, the portraits that most struck me were those I knew less: the Portrait of Johannes Froben, for example, painted around 1522, whose plain background and sober clothing focuses all the attention on the sitter’s face. It was designed to form a friendship diptych, alongside a portrait of Erasmus.

Wrinkled and balding, with a tuft of hair over his brow, Froben is dressed simply, a far cry from Holbein’s usual sitters with their blackwork cuffs or jewelled collars. The flush of blood over the bridge of his nose and across his cheeks contrasts with a subtle highlight on the tip of that same bulbous nose: it isn’t flattering and yet it is sensitive, respectful and almost affectionate. (Give me this any day, over Holbein’s frankly bizarre Noli me tangere, whose awkwardness has already led it to being dubbed The Karate Christ.) In this same room are the works representing the French School, many of which are actually by the Italian artists who came to work at Fontainebleau (such as followers of Primaticcio). I was impressed to see that the Royal Collection even managed to include a Leonardo drawing – the beautiful Masquerader – on the basis that he died in France. 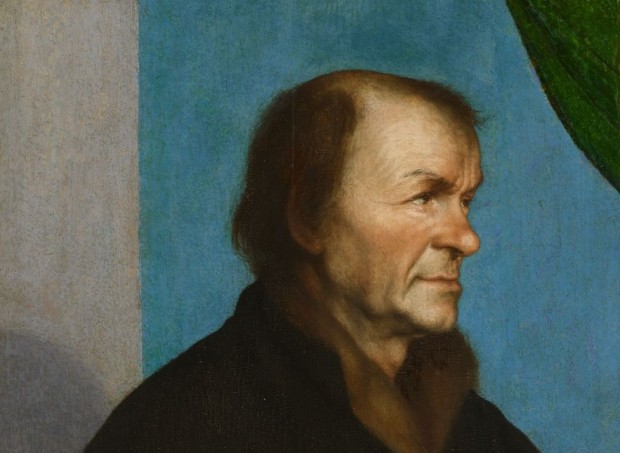 Overall, the exhibition doesn’t quite have the impact of The Art of Italy or the super Leonardo da Vinci: Anatomist show earlier this year. I think that’s because it wavers uneasily between the broad survey and the specific. It tries to cover Germany, the Netherlands, France and England, but of course it doesn’t have much space to work with and perhaps it doesn’t have enough material to do justice to an overview. The focus on Dürer and Holbein is diluted by the sense that actually they’re only part of a much larger story which never quite comes into focus. I wonder whether it might have made more sense to do a show which used Holbein, for example, as a way to explore the different threads of the Northern Renaissance which came together in London – but then that would probably have been too close to Tate Britain’s Holbein in England show back in 2007. As it is, though, it’s a great opportunity to see some rarely-exhibited works (especially the Holbein drawings) and I do recommend it to other Renaissance fans. There are many, many wonderful things that I haven’t mentioned. In fact, because it includes not only paintings and drawings, but also prints, sculpture, manuscripts and tapestries, it probably does offer a more faithful perspective on Renaissance visual culture than many other exhibitions on this period.

The catalogue looks promising, with very good reproductions, although I haven’t read enough to really comment on the notes. Strangely enough the Royal Collection is only selling a hardback version of the full catalogue; the paperback version, which is much cheaper, is actually a highly edited version which doesn’t contain all the essays and notes, so do be aware of that if you’re planning to buy online. 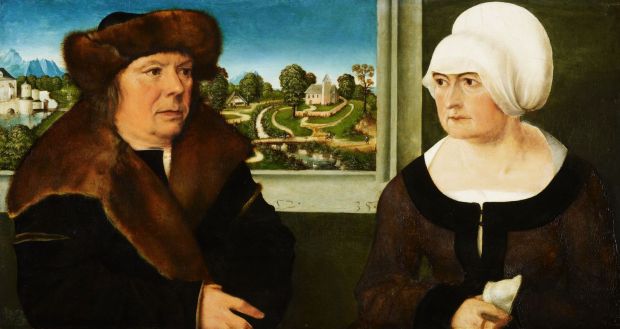 Ulrich Apt, Portrait of a man and his wife, Royal Collection