We’ve been well and truly spoiled for Leonardo this year and it’s only six months in.  There has been the blockbuster exhibition at the National Gallery, the exhibition in Turin at the same time, the Louvre’s show based around The Virgin and Child with St Anne, the touring exhibition of Leonardo’s drawings around Britain in celebration of Prince Charles’s 60th birthday, and now this show of his anatomical drawings at the Queen’s Gallery.

Although the paintings in the National Gallery show were the main draw for many people, I hope that lots of visitors came away with a deeper understanding of how superb Leonardo was as a draughtsman.  In the sheets included in that show, we saw how he emptied his teeming mind onto the page, sometimes pursuing several thoughts at once on a single sheet: the swirling of whirlpools; the design of war machines; a bird’s flexed wing; the movement of a cat. These are wonderful, but they do tend to emphasise the view of Leonardo as a bit of a dilettante, whose flibbertigibbet attitude was bemoaned by Leo X (‘This man will never finish anything!’).  This is the Leonardo I’ve come to imagine over the years, always half-distracted by something on the periphery of what he was meant to be doing – horses; the dream of flight; architectural design; ideal beauty; extreme ugliness; cats merging into dragons and men into lions.

The Queen’s Gallery show is so fascinating and valuable because it presents us with another Leonardo: focused, methodical and profoundly empirical.  This is the Leonardo who spent hours in a leather apron in the hospital of Santa Maria Nuova in Milan, teasing flesh from bone with a knife, whose exquisitely tiny notes pack the spaces around his drawings of skulls, joints and tendons.  For the most part, the exhibition divides up his drawings by region of the body, which means that you see him carefully working around a problem from all possible angles, refining and developing his ideas.

Faced with his conclusions and studies, I realised that I’ve under-estimated Leonardo.  It’s all too easy to pay lip-service to the fact that he was a great scientist, but this show is the first that has really hammered that home for me. Consider that he grew up in a world where traditional medical manuals were illustrated with symbolic representations of the human body, rather than accurate diagrams.  Vesalius’s De Corporis Fabrica, which was the first printed work to contain comparable illustrations, wasn’t published until 1543. Leonardo was at the vanguard of a science that was still finding its feet, and what we see in his anatomical drawings are the results of a man working purely from what he sees before him.  Over time his studies become more sophisticated and informed; and he develops new ways of packing the maximum amount of information into his diagrams, using the cross-section and the ‘exploded view’.

Some of the questions he comes up with, and some of his solutions, are so advanced that they weren’t confirmed by medical science until the 20th century.  He even came within a whisker of describing the mechanism by which the blood is circulated, but he was so bound to traditional notions about the function of the heart that he was unable to make the leap of faith that would have led to further understanding.  The process of circulation was first fully described over a hundred years later, in William Harvey’s De mortu cordis (1628).  Just think how incredible it is that Leonardo, a man with no formal education, armed only with a sharp eye and a remorselessly inquisitive nature, could reach such a point as this.

This exhibition demands engagement and concentration.  The explanations on the labels assume a high level of anatomical knowledge, higher in fact than I possess.  I do wish there had been more diagrams or images to tell us more about the various muscles or to show where Leonardo’s drawings (sometimes made from animal dissections) diverged from the reality of human anatomy.  But that is the only change I could suggest.  Spreading across three galleries, this is a feast for the eyes and the mind, and a testament to the riches of the Royal Collection.  It’s as illuminating about anatomy as it is about Leonardo.  And of course the most highly-finished drawings are exquisite works of art in their own right, beyond their scientific significance.  It’s rare nowadays to emerge from an exhibition feeling intellectually galvanised, but this is one case where this happened to me.

The great thing about the Queen’s Gallery is that you can have your ticket stamped, on which it becomes a pass for year-long entry.  With this exhibition continuing until October, and another major show on the Northern Renaissance due to open in the autumn (covering paintings and drawings, I hope), that’s a fantastic deal.  Next time I go back, I’m going to take advantage of the audio guide in the hope that this will give me an even greater appreciation of Leonardo’s anatomical work.  In the meantime I’m busy studying the catalogue, which provides plenty of further details and, even better, beautiful full-page colour plates of all the drawings. 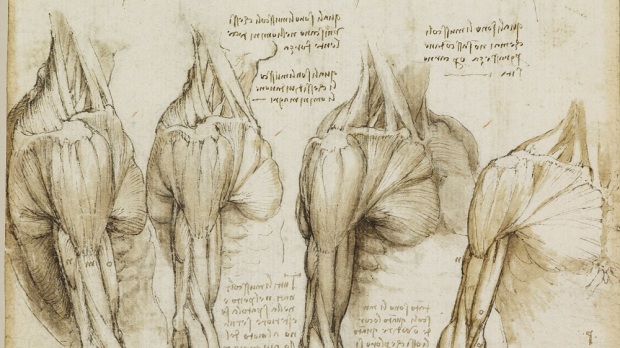 Leonardo da Vinci: Studies of the muscles of the arm and shoulder, Royal Collection, London (detail)