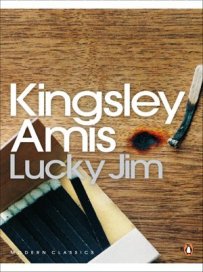 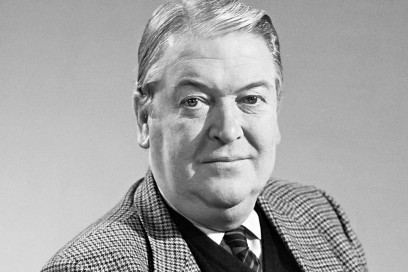 It’s 1950 and Jim Dixon is fed up. Having served in the Second World War, he has returned to academia in lieu of anything better to do and is now at the end of his first year teaching Medieval History at an unnamed provincial university. It’s a subject for which he feels no particular affection or aptitude; indeed, he has developed a particular loathing for it. His discontent radiates outwards, encompassing the insular and petty world of the university, those of his students intelligent enough to risk exposing him for the fraud he is, and virtually all his colleagues.

Most of his antipathy is reserved for his boss, the self-absorbed Professor Welch, whose academic career has been smoothed by his wife’s money and who enjoys a bourgeois lifestyle in his country house, complete with musical weekends and artistic gatherings, which Dixon is expected to attend if he wants to make the right impression. And he needs to, because his first year has been a catalogue of unintentional insults.

Torn between his professional need to ingratiate himself with Welch and his simmering contempt for the cultured bourgeoisie, Dixon goes, but allows himself to be infuriated: he’s especially provoked by Welch’s son Bertrand, a smug, self-proclaimed artistic genius whom Dixon automatically considers to be without merit. The fact that, despite this, Bertrand can move easily through life on a wave of privilege, collecting a bevy of beautiful girlfriends along the way, is something that Dixon takes as a personal insult. When Bertrand arrives at Welch’s artistic weekend accompanied by a new and particularly gorgeous girlfriend, Christine Callaghan, Dixon decides that enough is enough: it’s time for Bertrand to be undermined. However, Dixon’s interest in Christine doesn’t mean that he is free: through some oversight, he has allowed himself to become trapped in a dead-end ‘understanding’ with his emotionally fragile colleague Margaret Peel. He can’t even think of Margaret without condescension:

Margaret was laughing in the way Dixon had provisionally named to himself ‘the tinkle of tiny silver bells’. He sometimes thought that the whole corpus of her behaviour derived from translating such phrases into action.

Nevertheless he clings to her in a kind of panic just in case she is the only woman who will have him. The stage is set for a farcical comedy of manners, in which Dixon’s duties to Margaret clash with his desire for Christine Callaghan, and his childish feud with Bertrand becomes caught up in his steadily deteriorating relationship with Professor Welch.

When I read a book I take notes of passages that I particularly like or which make me laugh, and after reading Lucky Jim I had two whole pages of them, so there’s no doubt that I enjoyed it a lot. As you know, I’m fond of university novels and especially those which focus on historians of any stripe. This was my first encounter with Amis and I thought he had a splendid lightness of touch in the way that he undermined his characters’ pretensions. The book was a lot funnier than I had been expecting, with some gloriously absurd episodes like the issue with Dixon’s bedsheets at the Welches’ house; but the quality of the humour was appropriately rather undergraduate: sharp-edged and a little cruel, rather like Dixon himself.

And it certainly shows its age, which in some ways adds a veneer of sepia-tinted charm, but at the same time means that there’s a degree of misogyny which becomes rather tedious. The female characters are judged on their looks: Christine Callaghan, who’s gorgeous and well-dressed and well made-up, is also sensible and represents the prize to which Dixon aspires. If I had the sense that he aspired to her for her own virtues, I might be able to forgive him (and Amis) slightly more, but frankly Dixon wants Christine so that he can have something pretty and thereby stop Bertrand from having it. Christine is a pawn in a territorial display between two immature men with overdeveloped egos.

And poor Margaret… I was initially impressed by the fact that this 1950s history department had a female lecturer, but I should have known better. As a female academic, it’s taken for granted that Margaret lacks grace, beauty and finesse (it’s implied that if she was attractive she wouldn’t have to be an academic: she could take her proper place as the decorative possession of men like Dixon).

What a pity it was, he thought, that she wasn’t better-looking, that she didn’t read the articles in the three-halfpenny Press that told you which colour lipstick went with which natural colouring. With twenty per cent more of what she lacked in these ways, she’d never have run into any of her appalling difficulties: the vices and morbidities bred of loneliness would have remained safely dormant until old age.

I can’t decide whether that is simply Dixon’s judgement or whether Amis’s authorial voice is showing through. I have a distinctly uncomfortable feeling it’s the latter. Although Margaret is technically a lecturer, we never see her in action: she spends the whole novel struggling with depression and hysteria, which indicates that her fragile female brain surely can’t be capable of tackling such weighty tasks as teaching at a university level. Ah dear: as you might have noticed, this aspect of the novel narked me, but I can accept that it’s really a feature of the age rather than the novel itself, and all I can really do is thank God that I was born in the 1980s.

Dixon is the most developed character in the novel and it’s hard not to feel sympathy with him as he negotiates his relationships with a set of ridiculous people. However, his passive aggressive attitude to life seems to say more about him than his surroundings: surely it comes from his sense of his own inadequacy and an increasingly difficult fight to disguise it? He’s still little more than a child himself: while the experience of war has matured men like Michie, the intelligent student whom Dixon hates, Dixon himself remains frozen in a state of adolescent petulance. He expresses his opinion of Welch (and others) by childish face-pulling and fantasies of theatrical violence, which to be honest remind me of nothing so much as Basil Fawlty leaping around in spasms of inarticulate rage. Like Fawlty, Dixon can’t show his contempt openly because he’s too scared to do so and because he’s under the thumb of those he dislikes: professionally under Welch’s thumb and emotionally under Margaret’s. He can only find release through a series of infantile prank letters and phone calls, which usually come back to bite him and which draw him into steadily hotter water.

Yet the book never loses its light tone: even if Dixon were to lose his job, which is the main threat throughout, we can’t doubt that everything would be all right in the end. And besides, Dixon knows that he isn’t really fitted to the academic life. I loved the part where he was thinking about the article that he has been trying to get published: it perfectly shows the gulf between what Dixon knows he must do and what he really thinks, but it also demonstrates the complete pointlessness of articles like Dixon’s, which are published not because the writer has anything to say, but because he must publish something, anything, to beef up his CV:

It was a perfect title, in that it crystallized the article’s niggling mindlessness, its funereal parade of yawn-enforcing facts, the pseudo-light it threw upon non-problems. Dixon had read, or begun to read, dozens like it, but his own seemed worse than most in its air of being convinced of its own usefulness and significance. ‘In considering this strangely neglected topic,’ it began. This what neglected topic? This strangely what topic? This strangely neglected what? His thinking all this without having defiled and set fire to the typescript only made him appear to himself as more of a hypocrite and a fool.

Obviously I wasn’t around in the 1950s, but the cultural aspects of Lucky Jim (I’m thinking of Welch’s circle of congnoscenti and their interests) reminded me of A.S. Byatt’s The Virgin in the Garden. That book has the same ethos of 1950s academia and the same – to the modern eye – quaint obsession with the Elizabethan age. It seems that at the time of Elizabeth II’s accession there was a national fixation on the first Elizabeth and a desire to reenact or remake the age of Gloriana. In Byatt’s novel Frederica performs in an Elizabethan-inspired masque; in Lucky Jim Welch and his coterie hold madrigal-singing weekends, and poor Dixon is charged with the task of giving a lecture on ‘Merrie England’ (I presume that we are meant to pick up not only on the twee title, but also the fact that Welch is the kind of person who spells ‘merry’ as ‘merrie’). Was there really so widespread a focus on the Elizabethans and Jacobeans at this time, I wonder? In some ways I think I might rather have liked that…

I’m not sure that I’ve been left raring to go and read more books by Amis, but I am pleased that I’ve finally been able to read Lucky Jim, which is something that for some time I’ve felt I should have read. Of course, if you think there are other books by him that deserve to be read, then just drop a comment here and let me know: the floor is open!