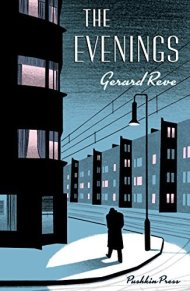 The Evenings caught my eye because it was described as the great postwar Dutch classic, following a young man on his meanderings through the night-time streets of Amsterdam. As some of you may remember, I spent some time working out of Amsterdam a couple of years ago, and grew rather fond of the city’s laid-back spirit, so I thought I’d give the book a go. The result – and I beg my Dutch friends to forgive me – is bemusement. It turns out that one man’s classic is another man’s bafflement, and perhaps the translation is to blame, for I found little to enjoy in this unremittingly bleak tale of youthful stagnation.

It is 1946 and Amsterdam is still scarred by the privations of war: coal is expensive; gas runs on meters; and chocolate is only available under the counter for those who know to ask for it. Frits van Egters is twenty-three and still lives in his family’s modest apartment, where he turns a scathing eye on the dull, repetitive routines of his disenchanted parents. A high-school dropout and uninspired office worker, Frits finds nothing joyful in his situation and exists in a kind of purgatory, waiting for life, perhaps, to suddenly hit him over the head. This book follows his wanderings on several evenings between the start of December and New Year’s Eve, as he tries to make the most of his time – having some pompous idea of how it should be spent and yet, unfailingly, finding that day after day slithers out of his reach. We only see Frits in the half-light, watching his own life like an embittered observer, needling at his parents, sniping at his friends and having weird uneasy dreams. He seems to have some vague, unarticulated ambition to escape this uninspiring existence, but he doesn’t have the motivation to do anything about it: rather than actually shift himself to improve, he makes do with sitting back and congratulating himself on how superior he is to everyone around him.

I can cope with books in which nothing much happens. I can cope with books in which I don’t like the protagonist. And I can cope with depressing books. But to bring all these things together is to demand a great deal! Frits is entirely uncharismatic. He’s a navel-gazing, pompous, arrogant, insensitive, hypocritical mediocrity and his life is utterly pointless – and he knows it. But he stumbles on, behaving like an impossible student rather than the grown man he is. He sneers behind their backs at his parents’ foibles, wincing at his father’s lack of social graces and looking down on his mother, but at the same time he’s terrified of any marital discontent which might threaten his own existence. He spends family meals in a welter of anxiety, trying to think of something – anything – to say so that the silence doesn’t weigh down upon them all, all too often finding solace in mundane questions. He’s petulant and entitled: a strange, sullen creature, half-child, half grown-up, trapped in some midway stage that he can’t seem to escape. He’s bored. So, probably intentionally, are we.

And things are no better with his acquaintances – I say that, rather than friends, because I don’t think Frits really has any friends. He spends his evenings popping in to see Jaap or Louis or Viktor or Bep, but no sooner has he arrived then he’s panicking at the weight of silence again, and tries to fill it with sound. He’s obsessed with baldness and torments his friends without cease; he thinks of horrific murderers or accidents which are supposed to amuse; and he’s both misogynistic and misanthrophic. Some of his friends are no better, trading stories of disabled people or unfortunate deaths with great hilarity, and you find yourself wondering exactly what has caused this generation of unfeeling young people. Is it something to do with the horrors of the war, still fresh in their memories? Is it some strange fight to cope with all the dreadful things that have happened? Or is it simply the brutal callousness of youth?

Classics are funny things. A national classic will often be deeply bound up with some trait in a people’s character or history which they perceive much better than outsiders. So perhaps my dislike for this book is simply because I don’t fully appreciate the world in which it was formed. But I struggle to understand the five star reviews proliferating on Amazon, as no one offers a reason why the book is so good. It’s true that I don’t warm to existentialist novels, as we discovered with the trial that was The Woman in the Dunes. But I simply can’t understand the point of something in which all the characters are so cold and detached and cruel and bitter and spiteful and petty and unhappy, with no charisma and no true story at its heart… The Evenings is simply an unfolding, a snapshot of a life which is dreary and which shows no sign of being anything other than that. I suppose existential fiction is all about the pointlessness of doing anything… but this novel really did leave an unpleasant taste in my mouth.

I would very much welcome dissenting views – not just telling me I’m wrong, because that doesn’t help anyone, but explaining what cultural contexts I may have missed. Why is this considered to be so great a classic? Is it genuinely regarded with such fondness in the Netherlands? Or is it one of those classics, like Lucky Jim, perhaps, that captured the mood of an era but now feels awkwardly outdated? I don’t like not liking things, especially something like this which a lot of people have clearly thought is brilliant. Tim Parks in the Guardian effused that it is ‘not only a masterpiece but a cornerstone manque of modern European literature‘. (Mind you, he also compared it to Waiting for Godot, and I would rather nail my tongue to a table than sit through that again.) Good God: what am I missing?