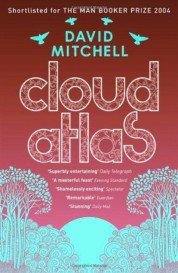 I’m delighted to be able to kick off the New Year with a post on a real stunner of a book, which I expect will already be familiar to most of you. There are a few literary adaptations coming out in the cinema over the next couple of months and so in principle this gives me an opportunity to revisit the books that I have read and to track down those I haven’t. Cloud Atlas is one of those I hadn’t read before: it came out when I was at university, but I was never particularly attracted to it because all the reviews I read simply lost themselves in hyberbole about its conceptual brilliance and neglected to give me any real sense of the story. Eight years later, having found a copy for £1.50 in a charity shop, I’ve come to realise that actually the critics were right. The concept is brilliant.

Even better, there’s a solid story behind it; or, more accurately, I should say six separate stories, which have some common elements and which playfully refer back and forth to one another, but without each losing its own integrity. Each story is set in a different time period and each is written in a different style and genre, so there’s something to please everyone. It could so easily have degenerated into pretension (and indeed I’d expected that it would, which is why I didn’t bother with it for so long), but the remarkable thing is that Mitchell is such a good storyteller that it somehow all works. Some sections were stronger than others, for me, but I suspect this says more about my reading tastes than about Mitchell’s skill as a writer; and the beauty of having six different storylines is that, if one doesn’t appeal to you quite as much as the others, you can reassure yourself that another will be along in a minute.

If you haven’t read the book, I would definitely recommend it and I feel that it’s more impressive if you come to it blind, as I did, so that you can gradually discover it by yourself. If you find the beginning a little overwhelming, don’t worry: so did I. This isn’t the kind of book that presents everything on a plate for your enjoyment. It demands that you work a little bit, but as with all books that ask for a little more engagement on the reader’s part, it repays your concentration tenfold. Spoilers follow.

It’s not often that you finish a book and think that it should form part of the A-level syllabus – indeed, I wouldn’t be entirely surprised if some enterprising soul has already added Cloud Atlas to the options. What better way to introduce readers to a range of different genres and styles? The novel progresses from historical fiction to epistolary novel to thriller to absurd comedy to sci-fi to oral testament. Mitchell provides perfect pastiches of various forms of writing: the 19th-century diary format in Adam Ewing’s Pacific journal, complete with ampersands and capitalised nouns; the falsely nonchalant, upper-class irreverence of Robert Frobisher’s series of letters from Zedelghem; the hard-nosed conventions of the crime thriller in Luisa Rey’s story; the  first-person absurdity and arrogance of Timothy Cavendish’s ordeal in the early 2000s; the interview format, truncated spellings and neologisms in Sonmi ~451’s dystopian futuristic tale; and finally the sense of an oral transcription, initially almost incomprehensible, in Zachary’s story set in a post-apocalyptic frontierland in what is now Hawaii. The wonderful thing is that, after a while, you become used to Zachary’s linguistic quirks: sections like the following lose their frustrating strangeness and become imbued with a kind of rhythmic beauty:

Mister Lardbird he slipped thru my fingers an’ skipped off but I wasn’t givin’ up, nay, I chased him upstream thru bumpy’n’thorny thickets, spring-heelin’ dead branches’n’all, thorns scratched my face diresome, but see I’d got the chasin’ fever so I din’t notice the trees thinnin’ nor the Hiilawe Falls roarin’ nearer, not till I ran schnock into the pool clearin’ an’ giddied up a bunch o’ horses.

It’s just incredible how much Mitchell manages to pack into 530 pages which is, let’s face it, not a particularly long book by modern standards. Each voice is distinct, consistent and entirely believable. I didn’t feel that every story was equally successful: personally I found the Timothy Cavendish sections very dull, partly because I developed an irrational loathing for the character, but also because I didn’t really see how this story fitted in with the others. The link elements – the birthmark; Cavendish’s receipt of the Luisa Rey manuscript – felt slightly as if they’d been tacked on in an effort to make the story into a bridge between the preceding and succeeding tales. But I am entirely willing to concede that I’ve missed the point and will welcome any comments that elucidate said point.

The arrangement of the book mirrors the Cloud Atlas Sextet composed by Robert Frobisher in ‘Letters from Zedelghem’. Each of the six storylines corresponds to one of his six solo instruments, ‘each in its own language of key, scale and colour. In the 1stset, each solo is interrupted by its successor: in the 2nd, each interruption is recontinued, in order’. Another way of explaining it is to say that it’s like looking at a slice of onion. As you move towards the centre of the onion you see various layers and as you pass the centre of the onion you see those same layers again on the way out. But Frobisher’s explanation is doubtless a more elegant way of looking at it. This was a clever conceit because you don’t initially understand the theme of each story and it’s often only in the second part that you can fit it into the message of the wider book. That overall message is power, of various kinds: the power of the state over the individual; the power of one group of people over another group; or of one person over another.

Adam Ewing observes the power of a warlike people, the Maoris, over their peaceable Moriori neighbours, which challenges his belief that Christian faith and enlightened knowledge – i.e. Western civilisation – is what signals success. In fact, the white man has been so successful not because of his faith or wisdom, but because he is the most ruthless of conquerors and has the most powerful weapons (guns) to back up his expansionist desires. On another level, Adam witnesses the power of one man over another through his patient-doctor relationship with Henry Goose. In the 1930s, Robert Frobisher is caught up in a case of one man wielding power over another, as he works for the manipulative composer Vyvyan Ayrs.

In 1975, Luisa Rey witnesses the power, blatantly expressed, of evil over good as the powerful corporation Seaboard seeks to assassinate those who stand against its desires to build a third atomic plant. Timothy Cavendish, in the period which comes closest to the present day, suffers not only the power of violent men over peaceable men, in his relationship with the Hoggins brothers, but also the power of the governing body over the individual when he finds himself tricked into a stay at a nursing home. In this microcosm of a totalitarian state, any desire for freedom is interpreted as rebellion to be crushed.

I suppose in some ways this is the point that I failed to get at the time: Cavendish’s ordeal represents in miniature what Somni ~451 experiences in the dystopian future of Nea So Corpros. Here we see the power of the nation state over the individual in its most drastic sense, but also the power of the corporation writ large – for Nea So Corpros is the corporation as nation state. This is a world in which power is also held by one group of people (the purebloods and, more specifically, the upstrata xecs) over another (the cloned fabricants). Unlike Cavendish, Somni ~451 has no means of escape, although her ‘ascension’ from programmed ignorance into independent thought reflects the progression from ‘savagery’ to ‘civilisation’ discussed by Ewing and Goose. And finally, in Zachary’s testament, the world is shown in the aftermath of social and economic collapse, where power has once again been exposed in its most brutal and basic form. Although Zachary and his neighbours believe that power resides in technical knowledge and civilisation – which they call Smart – it rapidly becomes clear, as it did to Ewing, that all the peace and civilisation in the world is as nothing against the fierce expansionist desires of a group of people who have more successful weapons – in this case, the Kona.

Yet despite the ultimately depressing message, there are hints that all might not be lost. Luisa and Somni ~451 overcome the corporations by publicising their testaments: Luisa’s report prompts a government enquiry which brings down Seaboard, while Somni ~451’s interview is publicised widely by the state: hoping to foster a public outcry against the fabricants, it actually ends up strengthening Somni ~451’s message, which survives the fall of the state and establishes a truth all of its own. Hence the relationship between true history and virtual history posited by Isaac Sachs, in which true events survive not in their true form but in a mythologised virtual form, like the shadows on the wall of Plato’s cave. It actually does make my heart hurt, trying to keep track of all the threads. It was almost a relief to play ‘spot the birthmark’ throughout the various stories. And throughout, we keep coming back to Hawaii and Korea as the key locations for the characters in every narrative.

I’ve already written much more than I intended to, and in the process I’ve turned out something that sits halfway between blog post and A-level essay, but even so I feel I’ve barely scratched the surface. Is it significant that Zonnebeke, the First World War cemetery where Frobisher’s brother is buried, sounds similar to the Swannekke atomic plants, or the Swannekke tribe described by Meronym in Zachary’s story? Surely it’s deliberate that Zachary’s lost brother is called Adam, referring back to Adam Ewing? How many things like that have I missed?! I’m going to have to read it again, perhaps after seeing the film, which I think is going to make things even more interesting in the way that it keeps the same actors throughout all the storylines, each of them playing as many as six different characters. Such an idea just adds another level of complexity to a story that is already formidably complicated, but in a way that leaves the mind buzzing. I’m loath to jump on bandwagons of any kind, but sometimes they do have merit and this is one case where I have to belatedly jump on board. No one will reconcile me to Timothy Cavendish, alas, but slightly flawed brilliance is still brilliance. Bravo Mitchell.