The Pre-Raphaelites were responsible for getting me into art history in the first place. As a teenager I fell in love with their dreamy evocations of Shakespearean and historical subjects, captivated first by the stories rather than the pictures themselves. Although I know many of their paintings extremely well, I haven’t really thought about them in context before and so this highly-acclaimed exhibition offered a chance to look more closely at the principles, motives and aims of the Pre-Raphaelite Brotherhood. It’s a tough job: many of these images are so famous, so seared onto our national consciousness, that it’s virtually impossible to judge them from the necessary distance.

In September 1848 a group of young men founded the Pre-Raphaelite Brotherhood in an effort to recover the purity, beauty and religious conviction of medieval art. For centuries the artistic establishment had looked to Raphael as the summit of artistic perfection, but the young men in 1848 – Millais, Rossetti and Holman Hunt among others – looked even further back. In doing so, they weren’t unique: in England, critics like Ruskin and architects like Pugin also reacted against the Industrial Revolution by dreaming of a more pastoral, more innocent world. Ruskin and Pugin both believed that in the medieval mind there was a purity of thought and a clarity of vision that could bring grace and beauty back into English art. Similarly, the Pre-Raphaelites not only drew on medieval artistic styles but also on medieval themes: their earliest works showed subjects from English history or literature, or from Italian writers such as Boccaccio and Dante.

In adopting folkloric and historical subjects as key parts of their repertoire, they were reflecting a wider European trend. Forty years earlier, in Germany, a group of painters called the Nazarenes had reacted against the classical academies by following what they considered to be the more spiritual style of early Renaissance art. Johann Friedrich Overbeck’s Portrait of Franz Pforr (1810) is on display here and you can immediately see some features that would reappear in Pre-Raphaelite art: the graceful, simple composition and the nostalgia for the medieval past. So, while acknowledging that the Pre-Raphaelites were original in the context of English art, we mustn’t forget that they actually grew out of an existing European movement: an effort to reclaim the purity of an idealised medieval past, in the face of the steam, iron and soot of an increasingly industrialised world.

Arranged thematically, the exhibition takes you through History; Nature, Religion; Genre; Portraiture; Applied Arts; and Aestheticism. Happily this means that you can also follow a broadly chronological story: as time passed, the artists within the movement broadened their interests and their field of references. While Rossetti’s medievalism initially played a key role in  the movement, it gradually became less dominant in the original Brotherhood’s paintings. It did however become a major feature of their followers’ applied art designs, most notably those of William Morris. Speaking of the History room, I’ve already mentioned how the Pre-Raphaelites chose to focus on literature and history rather than on the classical myths which had featured so strongly in Neoclassical art. Arthurian romances and modern poetry (especially Tennyson) provided other important sources.

When they painted landscapes, they worked en plein air and were some of the first English artists to do so. It’s this faithfulness to nature that results in the crisp, almost miniaturist detail that you see in some of their paintings, like Millais’s Ophelia. And I suspect that their love of nature grew out of their belief that the English countryside was in danger of being swallowed up by industry: their landscapes have a bucolic, nostalgic quality. Ford Madox Brown’s An English Autumn Afternoon: Hampstead (1853) glories in the twilight hush and the sweeping view across a typically English countryside of trees and church spires. It’s virtually unrecognisable as London and I wonder to what extent Brown was already idealising the real view. Were there really no chimneys or smog in 1853; or is this already a dream of what London used to be?

The religious pictures continue this obsession with naturalism: Holman Hunt went travelling in the Holy Land so that he could more accurately paint the settings for his Biblical pictures and so here are some of his views, culminating in his strange painting The Scapegoat (1854), with its range of wonderful purple mountains. Holman Hunt was the most visually exuberant of the Pre-Raphaelites and his paintings bubble over with intricate detail, exotic fabrics and intense colours. His picture The Shadow of Death (1870-73), which grew out of his visit to the Holy Land, is excessively bombastic to my secular modern eyes, but there’s no doubt that it’s a masterpiece, right down to the obsessively detailed tumble of wood-shavings on the floor. 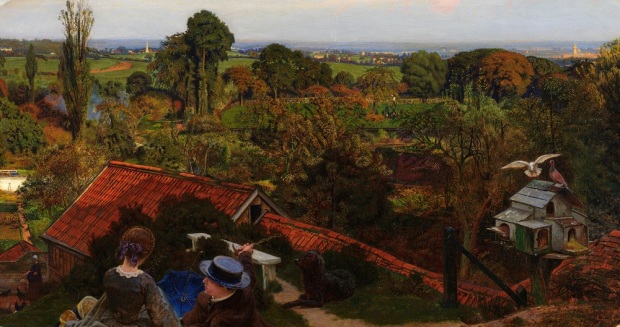 Indeed, the sentimentality of Victorian religion does provide a stumbling block if you come to the Pre-Raphaelites for the first time as an adult. Similarly, their attitude towards women, which comes across most clearly in the genre paintings, doesn’t do much to develop the moralising patriarchal view of the Victorians. For the Pre-Raphaelites, women are usually either domesticated saints or wicked sinners. Take Burne-Jones’s two pictures of Clara and Sidonia von Bork (1860). Clara is the ideal woman, the childlike innocent who shelters doves in her hands to protect them from her prowling cat. Sidonia, by contrast, is the experienced and dangerous woman, scowling over her shoulder and dressed in a knotwork gown which suggests the web of her deceits. Likewise, the genre pictures present women with a career dichotomy: angel of the hearth, or miserable harlot.

The contented mother is the ideal, shown with striking religious imagery in Ford Madox Brown’s Take Your Son, Sir (1851). Amusingly this has sometimes been interpreted as a mistress offering her illegitimate son to her lover, but I think the prevailing view of current scholarship is that it shows a wife offering her first-born to her husband (glimpsed, beaming, in the mirror; a self-portrait of the artist). And if a woman is a harlot – well, then her only hope of salvation is to be redeemed by a good man. Morality and bucolic nostalgia come together in the steadfast countryman who rescues his former sweetheart in Rossetti’s Found (1853-62). He loyally ignores her descent into prostitution and no doubt intends to pop her into the back of his cart along with his calf, which bound up in a net to prevent it straying (the parallels are not subtle). 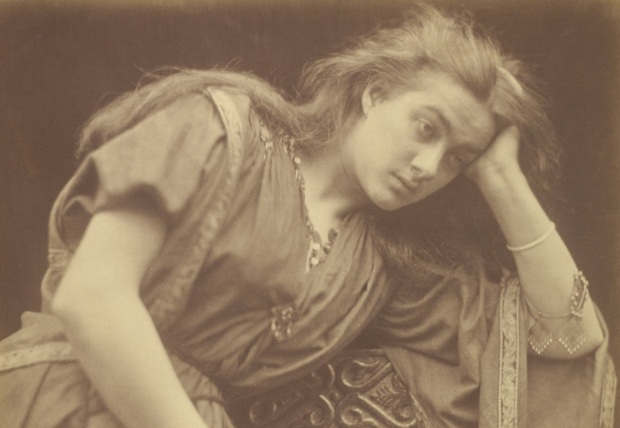 It was a relief to stumble across Julia Margaret Cameron’s photograph of Mariana. Most people know Millais’s Mariana (1851), in which a beautiful woman waits with demure resignation for her lover to return. She is weary and lonely, but her face betrays no impatience and she occupies herself with embroidery and religious meditation: the perfect image of a desirable Victorian woman. Cameron’s Mariana by contrast is crammed into the picture frame, emphasising her lack of freedom and her exile; her expression is one of fractious boredom rather than the saintly patience which Millais seems to have thought appropriate. This is a Mariana you can believe in: fed-up, beginning to question her loyalty to her fiance, chafing at the bounds of her existence. It was a welcome shot of spirit in a show where women don’t really get a variety of roles.

As Pre-Raphaelitism developed into Aestheticism, the fervent naturalism of the early days – Holman Hunt’s blindingly detailed Biblical paintings, for example – faded away and the dominant aesthetic became even more stylised, even more planar and medieval. This can be seen very clearly in  the designs for the Kelmscott Press Chaucer (1896), which was one of the things I most wanted to take away from the exhibition. This stupendous book turns The Canterbury Tales into a labyrinth of gorgeous woodcuts: borders of roses and vines enclose the pages and each paragraph begins with an elaborate initial. It’s a bibliophile’s dream. Beyond this, and in much the same spirit, I found a handful of paintings by Burne-Jones, chief among them the Perseus series: The Rock of Doom; The Doom Fulfilled and The Baleful Head (1886-7). These sum up all that is beautiful in Burne-Jones’s art and, even though the perspective of the reflected faces in The Baleful Head might not be entirely accurate, I still think that these are among his most beautiful and most perfect pictures. I’ve seen many paintings which are more psychologically intense, more dramatic, more naturalistic or more impressive, but there’s something about Burne-Jones – so simple, so restrained in his palette and so serene – which gives me a blissful sense of calm. It was a lovely way to conclude the exhibition. 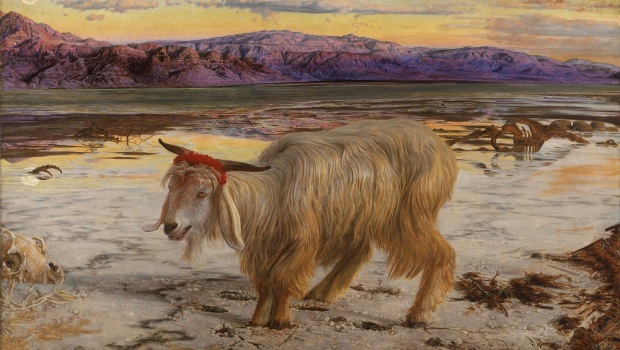 I’ll restrain myself to mentioning just one more painting, primarily because it has become something of a cause celebre in the English press these last few months: Millais’s Lorenzo and Isabella (1849). One of the exhibition curators observed that Isabella’s brother, who holds his knife at an aggressive angle in the foreground, casts a shadow onto the tablecloth that looks just like an erection. Lots of people have become far too fixated on this detail, which is given being an theoretical significance far beyond its due. Even if it is really intended as a phallic symbol (after all, a cigar is sometimes just a cigar), then I think we have to see it as simply a bit of a visual joke between the artist and the viewer. By fixing on this as a key aspect of the painting, and by nudging your neighbour and pointing, you’re missing the fact that this is a remarkably impressive picture painted when the artist was only twenty years old and full of technical brilliance.

Look at the intricately crumpled folds of Isabella’s gown, which reminds me of the crispness of draperies by Ingres or Trinquesse; look at the smooth head of the startled greyhound, which would give Landseer a run for his money; and the rough red fabric of the brother’s doublet, which you almost imagine you could smooth with your hand. It’s also almost a manifesto for the Pre-Raphaelite Brotherhood, because the guests at the banquet were painted from Millais’s friends and colleagues: the man drinking from a glass at the back is Rossetti; the figure of Lorenzo was modelled by Rossetti’s brother William Michael; Frederic George Stephens and Walter Deverell are the two men on the left. It’s a dazzling piece of work for such a young artist, even one hailed as a wunderkind and so you can imagine why I feel rather disappointed that its quality has become, almost literally, overshadowed…

The exhibition closes next Sunday, so if you haven’t already been then I’m afraid you haven’t much time left, but do try to get there if you can. The catalogue looks quite impressive and thorough, though I haven’t actually bought it, because I am trying to be good this year. 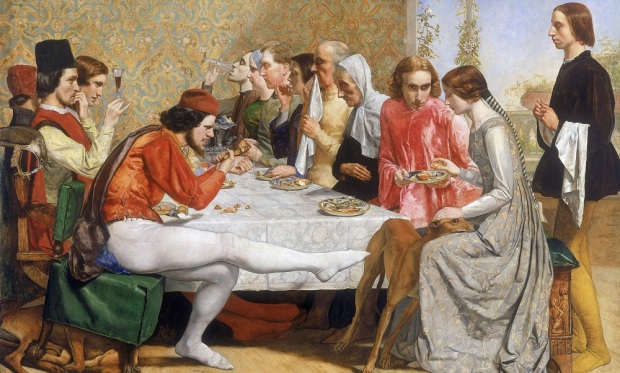