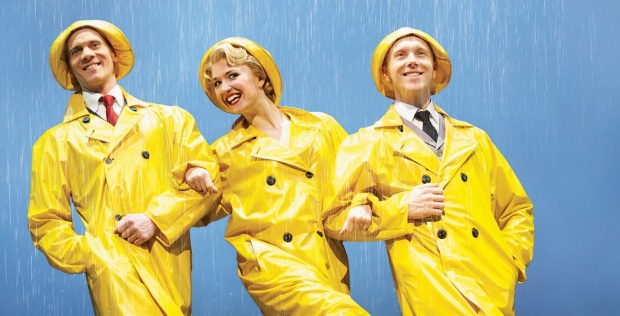 It’s official. Happiness is Adam Cooper in a trilby.

The place is Hollywood, the year 1927, and Don Lockwood (Adam Cooper) and Lina Lamont (Katherine Kingsley) are the golden couple of the silver screen. Their on-screen romance has captured the hearts of their public and provided their studio, Monumental Pictures, with a series of smash-hit silent movies. But times are changing. Warner Bros have just released The Jazz Singer and suddenly the pictures have exploded into sound.

RF Simpson (Robert Powell) and his stars at Monumental must follow suit, but there’s a problem. The gorgeous Lina may look like a goddess, but she speaks with an ear-splitting New York twang. Like many producers at the time, RF faces the dilemma of how to keep trading on the glamour of his most bankable star, while trying to keep her silent. Don and his best friend, musician Cosmo Brown (Daniel Crossley), come up with a plan to save the studio: Lina will continue to act, but her voice will be dubbed by the talented chorus girl Kathy Selden (Scarlett Strallen), who has captured Don’s eye… and his heart.

This would have been a lovely evening under any circumstances. The heartwarming story left me with such a feel-good glow that I fought the urge to tap-dance my way back down Shaftesbury Avenue, scattering tourists in my wake. I even found myself hoping it would be raining (it wasn’t). And the show turned out to be even more magical than I’d anticipated, thanks to an unexpected ticket upgrade offer. For £10 I exchanged my cheap seat on the back row of the vertiginous balcony for an incredible seat in the eighth row of the stalls, and the stage was transformed from a distant square of light into a thrilling all-encompassing panorama. It was absolutely marvellous. In the opening premiere scene the characters are introduced by a stately procession down the aisle of the stalls, a mere arm’s length away from me; I could watch their expressions as they sang and danced on stage; and yet I was just far enough away not to need a waterproof. More on that later. 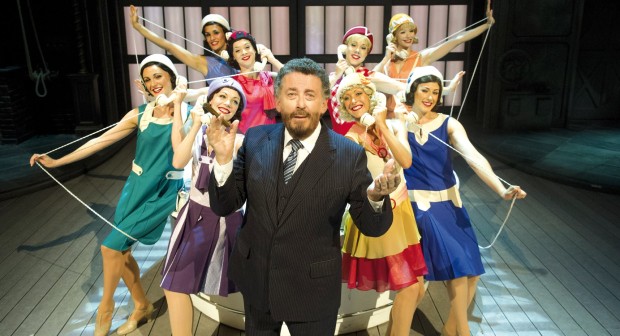 RF Simpson (Robert Powell) and the girls of Monumental Pictures

I’ve never seen the classic 1952 film of Singin’ in the Rain and so I knew nothing about the show beyond the title song and the first verse of the number Good Morning. Everything unfolded in front of me for the first, beguiling time. I hadn’t even realised that the show was set in Hollywood and that it shared a great deal with The Artist, one of my favourite films of recent years. The cast, of course, were wonderful (the show’s been running at the Palace for a year and still has the original cast, with the exception of Robert Powell, who joined in October). Daniel Crossley was a wry and self-effacing Cosmo, a good-natured man resigned to living in the shadow of his more famous friend; while Scarlett Strallen’s Kathy was wholesome and perky, but able to slip quickly into a more romantic mode for quieter numbers like You Were Meant For Me. And although Katherine Kingsley, as Lina, didn’t really get a chance to sing (her What’s Wrong With Me? was more of a piercing squawk), she drew out all the humour of the role, while also managing to suggest the pathos of an actress who knows that her grand career is heading for an iceberg.

But the one I’d come to see was Adam Cooper. I know him mainly from his muscular, seductive interpretation of the Swan in Matthew Bourne’s Swan Lake, and the prospect of seeing him dance on stage was the main appeal of the show (for the first time since I was in my early teens, I seriously considered waiting at the stage door for an autograph). And that was when I thought I’d be up in the balcony! To suddenly find myself in a seat merely fifteen feet away from the action was a stunning piece of luck: be still, my beating heart. Cooper’s dancing, it goes without saying, was spot-on and effortless: his background in the Royal Ballet must mean that a West End musical is a walk in the park. What really surprised me, however, was his singing; I didn’t even know he could sing. He handles everything with the nonchalant charm of a bona fide matinee idol, and yet the musical isn’t a star vehicle for him in the same way that it would be for someone chosen through a TV talent show. The rest of the audience weren’t necessarily there to see Cooper: they were there to see a brilliant show, whose success is the result of a strong team and a whole heap of fizzingly infectious energy.

The company get their feet wet

Of the big production numbers, I liked Beautiful Girls the best. It was full of golden-age glamour and wide-eyed, blindingly-smiling innocence. Kathy and her chorus line perform their routine atop the wings of a glossy, almost life-size biplane, as fleet-footed aviators and a white-uniformed officer dance below in a swirl of dry ice. You Were Meant For Me was blissfully romantic as Don seduced Kathy in the course of a sweeping ballroom routine. But the song that everyone was waiting for was Singin’ in the Rain – and not just because we wanted to see some more dancing. It actually rains on stage, gallons of the stuff, which fills the auditorium with the chlorinated scent of a swimming pool. Great puddles form on the set and I offer you this advice out of the goodness of my heart: do not sit in the first four rows of the stalls because you will get wet. Cooper carries off his solo number with great gusto, jumping and stamping and kicking waves of water out over the audience. Every time there were squeals from those at the front, but they were all grinning so much that I don’t think they minded. (It’s even worse in the finale. Then, the first six rows get damp.)

Funnily enough, it was in the Singin’ in the Rain number that I felt the only little twitch of disappointment. I’d expected this number to be a real showpiece, a chance for Cooper to show off his devilishly fast footwork, and yet I didn’t see anything quite as intricate and snappy as I’d been hoping for. But I don’t think I’d considered the logistical issues with dancing in a couple of inches of water: Cooper’s shoes and trousers must have been soaked through, which doesn’t make it easy to suddenly break into some blinding show of tap-dancing. The essence of that number was not showmanship, but sheer, undiluted joy.

It was a boost of unalloyed delight to start the year and, if anyone else is keen to see it, then do take a look at the Get Into London Theatre website, which has lots of fabulous deals throughout January. Thanks to them I’ve also got a ticket for Top Hat next week, so more tap-dancing is on the way.

Now: someone find me some rain, an umbrella and a lamppost to swing around!