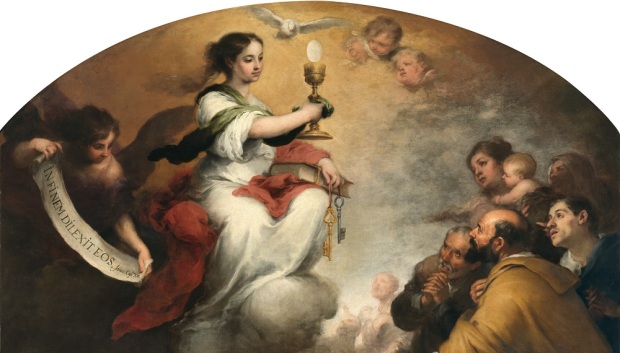 London is the place to be for Murillo at the moment. This exhibition at Dulwich is complemented and echoed by a similar small show at the Wallace Collection, both of which will be ending soon. Yesterday I took the chance to visit both in one day, an experience which forced me to think a little more deeply about Murillo as an artist and which offered two different, but complementary perspectives on his painting. While the Wallace Collection looks at how the Marquess of Hertford assembled his collection of Murillos in the 19th century, Dulwich goes further back in time and homes in on the artist’s relationship with his key patron in Seville, the cathedral canon Justino de Neve (1625-1685).

Murillo lived his whole life in Seville; he was part of the generation that immediately followed Diego Velazquez, and so if you saw the recent Velazquez exhibition at the National Gallery, this makes an interesting counterpoint. The show is almost entirely devoted to Murillo’s work for Justino de Neve and focuses on two decorative cycles commissioned by him in Seville: one for the church of Santa María la Blanca, and the other for the Hospital of the Venerables Sacerdotes (a home for retired priests). Santa María la Blanca was dedicated to the Virgin of the Snows – in memory of an event in 4th-century Rome when the Madonna appeared in a dream to a Roman patrician and his wife (a story which Murillo represents in one of his lunettes for the church, on display here). She told them to build a church for her on a plot of land which, when they awoke, was marked with a miraculous August snowfall. That church became Santa Maria Maggiore in Rome, but the legend became a popular object of devotion in its own right.

During the restoration of Santa María la Blanca, in 1662-65, Justino de Neve commissioned lunettes from Murillo to decorate the nave. The curators of the exhibition have very effectively set these lunettes higher than usual, in the walls of a replica nave, to give visitors an idea of what the effect of the church must have been like. This is a great idea, although there had been so much publicity about the ‘nave’ that I’d been expecting something grander. Nevertheless, it packs a visual punch to walk into this darkened room and to see, spotlit and glowing ahead of you, Murillo’s Immaculate Conception of the Venerables Sacerdotes (1660-65), acting as a kind of high altar, with the lunettes similarly lit on the walls around you.

Two of the lunettes represented Counter-Reformation doctrines that were particularly close to Justino de Neve’s heart: The Immaculate Conception and The Triumph of Faith. The other lunette on display is the one I mentioned earlier: The Foundation of Santa Maria Maggiore: The Dream of the Patrician and his Wife (1664-65). Looking at these, it becomes immediately apparent why Murillo was so valued as a painter of religious works. He was able to simplify doctrines and religious legends, making them appealing and accessible to ordinary people. For example, the Roman patrician and his wife are dressed like contemporaries of Murillo’s, the sombre yellows and browns of the man’s costume contrasting with the vibrant red of his wife’s gown. They sleep so deeply that they seem to have been cast under a spell – even the wife’s little lapdog is curled up, nose-to-tail. At the upper left of the lunette, in a burst of light, a pretty Virgin appears, pointing out the window to where a fresh fall of snow has carpeted the ground. In each lunette, there is this contrast between the real world – tucked into one corner – and the world only visible through faith – the smiling girls, representing Virgins or Virtues, who appear in radiant blooms of light.

In a room off to the side, the exhibition gathers some other Murillos known to have been in Justino de Neve’s collection, alongside Murillo’s famous Self Portrait from the National Gallery and, also from the NG, his portrait of Justino de Neve himself. Funnily enough, I found this portrait rather stiff in comparison to the more spirited religious and allegorical works outside. With his hooded eyes and severely-trimmed beard and moustache, Justino de Neve looks a good deal sterner than I’d expected (and unavoidably made me think of Lord Vetinari). The most naturalistic part of the picture is his pet dog, who gazes up at him – rather incongruously wearing a big red satin bow.

The grand Immaculate Conception of the Venerables Sacerdotes, at the ‘high altar’, wasn’t actually painted for the interior of Santa María la Blanca. It was in Justino de Neve’s private collection and formed part of a temporary altar that was erected in the square outside the church for its reopening on 5 August 1665 (the feast of the Virgin of the Snows). This  altar also contained two other Murillos from Justino de Neve’s own collection: The Infant Christ as the Good Shepherd and The Infant Baptist with the Lamb. Around this temporary altar, the square housed an open-air art exhibition, with paintings by Titian, Rubens and Ribera among others. Just imagine what a spectacle that must have been! 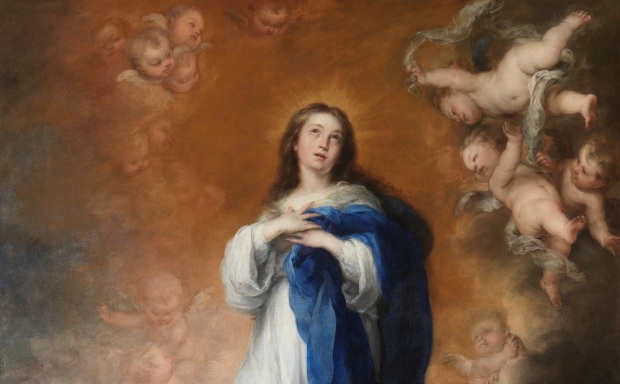 Murillo, The Immaculate Conception of the Venerables Sacerdotes (detail)

The spirit of Rubens hangs heavily over The Immaculate Conception, actually, but Murillo has taken the Flemish voluptuousness of Rubens’s paintings and transformed it into something sweeter, simpler and less robust, all illuminated with the tremblingly diffused golden light that became a characteristic of Murillo’s late estilo vaporoso (vaporous style). With its rounded, slightly vacant Virgin and its tumbling column of chubby putti separating enlightenment from darkness, Murillo’s Immaculate Conception is like Rubens on a sugar rush.

The final rooms depart from Justino de Neve and focus on Murillo paintings from the Gallery’s own collection. There are two pictures of beggar boys, and a selection of works which were thought to be by Murillo when acquired by the Gallery, but which have now been (mostly) relegated to copyists or followers. I found it telling that Murillo’s portraits of roguish young beggars were not painted for his native Spanish patrons, but for the northern European merchants – many from the Spanish Netherlands – who traded in Seville. It confirmed my sense that these pictures were fundamentally souvenirs for these merchants to take back home: romanticised evocations of picturesque vagrants,  which would become the defining element of Murillo’s work from the 18th century until the dawn of the 20th; and which must have had next to no basis in reality (I was fascinated by the gleaming row of improbably white teeth revealed by the grinning urchin in An Invitation to a Game of Argolla).

This is where I must be honest. I haven’t always been overly fond of Murillo. I don’t dislike him, and I can see that he is sometimes a superb technician, but I have difficulty in shaking off the cloyingly sentimental view of his work bequeathed to me by the Victorians. Simpering Virgins and cute street urchins tend to set my teeth on edge; but, in visiting these two exhibitions yesterday, I began to understand that Murillo was capable of doing more than that. To some extent, I feel the same about Murillo as I did about Barocci (although Murillo lacks Barocci’s drama and passion, and doesn’t move me so much). What I mean is that there are often excessively sentimental aspects to Murillo’s art – such as the self-consciously adorable St John hugging a sheep in The Infant Baptist with the Lamb. 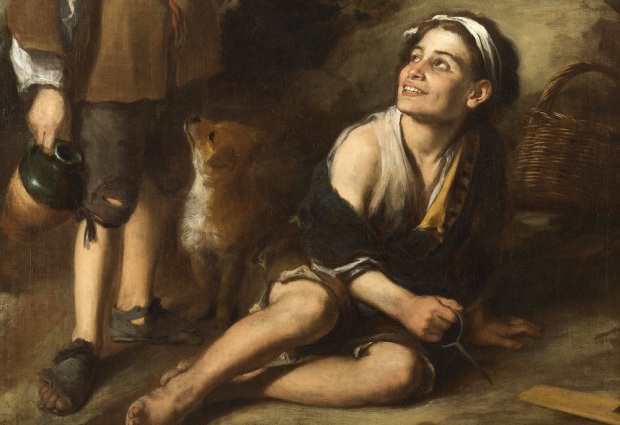 Murillo, An invitation to a game of argolla (detail)

However, by looking at the incidental parts of the painting, you can see how talented Murillo was. Look at the verve and sprezzatura of the brushwork on the lamb’s fleece, or the precise naturalism of its head. Look, too, at the strangely dark and threatening background, which dissolves into an impressionist suggestion of land and sky, dominated by the kind of briskly-delineated tree that has descendants in Gainsborough oil sketches. The Penitent St Peter (c1675) was another picture that surprised me, because it shows Murillo channelling Ribera and, though he doesn’t quite have Ribera’s ruthless honesty about the ravages of old age, it’s not a bad effort. The crumpled vellum-bound book lying at the foot of the picture, for all its simplicity, was extremely well-done; indeed, Murillo is always very good at still lives – whether a mound of blowsy roses in a flower-girl’s lap, or the stiff golden crust on a loaf being handed out by the Christ Child.

Taken together with the current Wallace Collection show, this exhibition presents us with a more rounded and engaging view of Murillo than many of us will have grown up with. It must be commended for that. I’ve said before that I like exhibitions with a narrow focus which do their work well, and it was an inspired idea to focus the majority of the show on Murillo’s commissions from Justino de Neve. It gave the exhibition a logic and a purpose which ties it together and enables us to imagine what the decorative cycles for Santa María la Blanca and the Hospital of the Venerables Sacerdotes would have looked like, before the French occupation of Seville in the early 19th century led to many of Murillo’s artworks being carried off (and sometimes lost to view: The Penitent St Peter has been only recently rediscovered, and this is the first time it has been on display for 200 years).

There isn’t much time left before this exhibition closes, but do pop in if you get the chance. It’s always lovely to have an excuse to go to Dulwich, especially when the weather’s lovely as it is at the moment, and – even if you’re not a big fan of Murillo – you, like me, might find yourself beginning to appreciate him a little more. 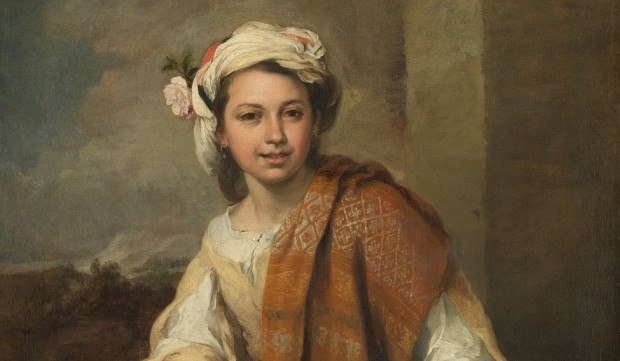 2 thoughts on “Murillo and Justino de Neve: The Art of Friendship”