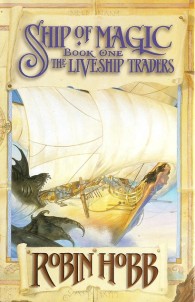 The Liveship Traders Trilogy: Book I

Time to return to Robin Hobb. I’m now onto the first book of her second trilogy, The Liveship Traders. These books are set in the same world as The Farseer, a long way further south, where the trading community of Bingtown lies between Chalced and Jamaillia. Bingtown could belong to an entirely different age than the Six Duchies. Here, rather than the medievalism of The Farseer trilogy, we have  trade and shipping and merchants’ colonies, with a distinctly seventeenth-century feel. The Six Duchies are mentioned occasionally, but mainly as a bitterly cold backwater (both in location and civilisation) that no one particularly wants to visit. The two trilogies aren’t completely separate, of course, but that’s something that doesn’t become obvious until a little later on, so I’m going to hold off until the next book.

At the heart of Bingtown are its Trader families, descended from those who originally came to settle on these shores. They have governed the town well over the years, protecting their traditions and preserving their links with their reclusive fellow settlers, the Rain Wild Traders. But times are changing. New families are coming to settle in Bingtown, who have no understanding of, or respect for, the ancient pact with the land, and who unwittingly threaten the delicate diplomacy with the Rain Wild Traders that keeps Bingtown going.

The alliance has been both a blessing and a curse. The Rain Wild Traders can offer their Bingtown cousins untold wealth and success, by contracting with them to build a liveship – a sentient vessel crafted from wizardwood. Such a ship is only offered to Bingtown Trader families, and is the only kind of vessel which can find its course up the Rain Wild River, to trade for the exotic and expensive goods produced by the Traders there. But, in return, the Bingtown Traders will owe the Rain Wild Traders a hefty debt, so great that it can only be paid off over the course of generations, and which (if payments are short, or unpaid) can always be called in by blood as well as gold. The prospect of sending off a child to the Rain Wilds, where the climate produces heightened mortality rates and horrific disfigurements, is not one to be taken lightly; but, when the alternative is a liveship, it is a bargain worth considering.

The Vestrits, one of the families who have made the contract, have been paying off their debt for three generations, and watched two generations of their family die on board their ship, the Vivacia. Now it is time for the third generation to die on her, and pass into her, at which point she will quicken, and become fully alive and sentient at last. It is a moment full of mingled grief and excitement for Althea Vestrit, who has spent her childhood and youth sailing with her father aboard Vivacia and who expects that, with his death, she will be given the captaincy of the ship.

However, she faces a bitter disappointment. Her father’s will passes the ship not to her but to Kyle Haven, the husband of her elder sister Keffria, who has no concept of what it truly means to command a liveship. Knowing that a blood-member of the Vestrit family must be on board, Kyle has brought home his eldest son Wintrow from the monastery where he was training to be a priest, much to the boy’s distress; and Althea is dismissed from the ship to learn what Kyle considers to be the more important task of being a proper lady – as weak, subservient and unskilled as her sister seems to be. Outraged, Althea seeks a way to prove herself in a world which, with the arrival of ever more immigrants, is becoming increasingly intolerant of old Bingtown ways and increasingly restrictive in its concept of womanhood.

I can see that you go through life athwart it. You see the flow of events, you are able to tell how you could most easily fit yourself into it. But you dare to oppose it. And why? Simply because you look at it and say, “this fate does not suit me. I will not allow it to befall me”… I have always admired people who can do that. So few do. Many, of course, will rant and rave against the garment fate has woven for them, but they pick it up and don it all the same, and most wear it to the end of their days. You… you would rather go naked into the storm.

And, as Vivacia comes to awareness, she finds herself forced to sail without Althea – the one person who could truly have understood her. Meanwhile, in the islands to the south of Bingtown, the pirate captain Kennit quietly begins to build a reputation for himself, with his eyes on the highest prize of all: a liveship of his very own.

A lot goes on in this book – I’d forgotten how much! – and Hobb uses third-person narration  to move from plot to plot, letting her characters’ destinies unravel. I still don’t feel that there’s anyone here who can match Fitz for sheer complexity, but there are a few people who’ve caught my attention (and even the less absorbing characters have plot-lines that promise to reveal more about the workings of Hobb’s intricate and fascinating world). First among my favourites is Althea, as you might expect. She is Hobb’s strongest female character in any of the books I’ve read: determined, practical and able to channel her disappointment at the loss of Vivacia into a passionate desire to prove herself.

Then there is Kennit. The fact he’s a dashing pirate captain naturally works in his favour, but he’s also very well-written and much more nuanced than you might initially assume. I’ve seen reviews in which he’s been dismissed as purely a villain, but Hobb is too good a writer to make someone completely villainous; and besides, I get the feeling that she’s rather fond of Kennit herself. Yes, he can come across as a bit of a swine – his behaviour to his mistress Etta is particularly nasty at times – but I’ve always felt that this is because he’s trying to hide his true self behind a mask. He’s playing a part; and I think the wizardwood charm at his wrist sometimes acts as a channel for his true character: a sign that, deep inside, there’s still a soul worth saving.

The third character I’m fond of – for reasons that will become clear further down the line – is Amber, the enigmatic wood-carver recently arrived in Bingtown. Amber becomes a friend not only to Althea, but also to the bitter, blinded rogue liveship Paragon, who lies abandoned on an isolated beach, after a fit of madness led him to drown his family and his crew. I’ll be coming back to Amber in the later books, no doubt. At the moment, if I have to pick one character that I would gladly see thrown overboard, it would be Malta: Kyle Haven’s spoiled thirteen-year-old daughter, who is so vapid and irritating that she’s practically a cliche. I don’t remember Malta’s plot arc, but I just pray that she becomes more bearable soon. Despite Malta, however, this is a story that I can heartily recommend: a rollicking sea-shanty of a book, with a chance to glimpse some of the other parts of Hobb’s compelling world. Full of adventure, romance, plotting, the perils of shipboard life, sea-serpents and, above all, pirates (!), it briskly sets up the threads that will unfurl through the two books to come.

This was the first time I’ve felt differently about a book after a reread: I remember that I didn’t much enjoy The Liveship Traders the first time. Not realising that there would be another Fitz-and-the-Fool trilogy coming up, I felt as if I was being palmed off with Bingtown when all I wanted to know was what was happening up in the Six Duchies. Now I’m older, wiser and able to see this trilogy as part of the larger picture, and so I’ve enjoyed Ship of Magic much more second time round. I was so deeply absorbed, in fact, that I was positively shocked when the book suddenly ended – one of the results of reading on a Kindle, of course, where you can’t see how many pages are left!

P.S. For those tempted to read this on their Kindles, you can either buy Ship of Magic on its own or buy an omnibus of the entire Liveship Traders trilogy. At the moment it’s cheaper to do the former, but that can change, so check both to make sure you get the best value.

To finish I would like to resume my cover feature, in which I present some of the covers from other editions of this book. There are no out-and-out horrors this time, which is a bit of a shame actually, as it’s much more fun when we have some off-the-wall designs to make fun of. 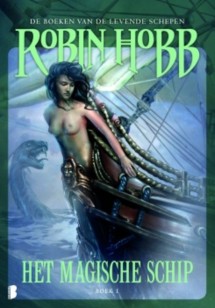 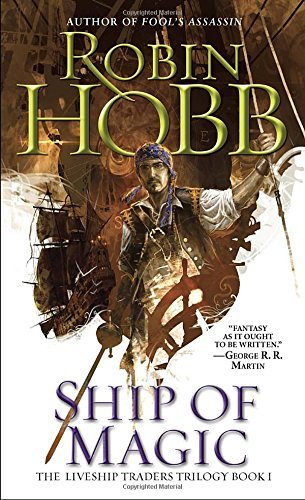