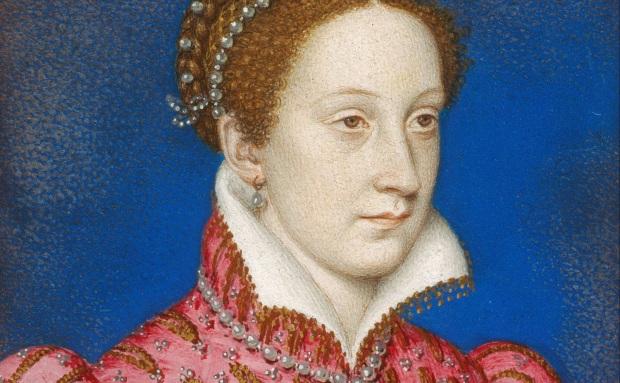 Sea-mist, pinnacles, towering fortifications and nary a level street between them: Edinburgh certainly is a captivating maze of a place. Although my time there was dominated by research – libraries, archives and lots of fabulous old letters – I decided that I had to make time for a bit of sightseeing. The exhibition on everyone’s lips at the moment is the Mary, Queen of Scots show at the National Museum of Scotland. It was just down the road from the library where I’d spent the best part of an extremely wet morning; so I went off for a refreshing dose of the Scottish sixteenth century.

Despite my general appetite for this period, I haven’t read much about Mary and so I appreciated the exhibition’s very clear chronological approach. A series of backlit screens takes you through key episodes in her life, while nearby cases show items which help to give more of a flavour of the time in question. There is a large and very helpful family tree, along with portraits of Mary’s direct ancestors, including the Wedding Portrait of James V and Mary of Guise (c1538), in which it’s hard to say which of the two newlyweds looks less enthusiastic at their marriage. Light projections onto the floor added to the feel – a diamond-pane window just inside the entrance door; Tudor roses, fleurs-de-lys and lions in the section dealing with Mary’s childhood and the Rough Wooing. The showpiece of the exhibition is a short film focusing on Lord Darnley’s murder at the Kirk o’ Field, sifting the evidence and the depositions and judging who – out of the main suspects – had most to gain or lose. It was interesting to note the shift of emphasis: as an English child learning history, I heard most about Mary in the context of the Babington Plot and Fotheringay; while in Scotland the focus is upon Darnley’s murder and the subsequent civil war.

The overriding picture was of an intelligent and capable young woman who started out with the best of intentions, but who was ultimately led to ruin when the powerful men around her tried to use her as a way to realise their own ambitions. As Dauphine of France, she was encouraged by Henri II to claim the English throne when Mary Tudor died. Henri wasn’t acting in Mary’s best interests – instead, this must have injected an early poison into the relationship between her and Elizabeth I – but was driven by his own vision of a united realm of France, Scotland and England, which he planned to achieve through his children. Later,  when the widowed Mary had returned to Scotland and her impulsively romantic marriage to Lord Darnley went sour, she was dragged into the scandal of his murder thanks to the ambitions of Lord Bothwell, who carried her off and then married her himself.

When she did well, on the other hand, it was because she had the right team of advisers around her: her early successes in Scotland were directed by the counsellors appointed by her half-brother Moray, who seem to have abandoned her during the ill-considered marriage to Darnley. And, in their absence, that’s when she seems to have begun floundering. The chaos that followed – not only Darnley’s murder and Mary’s marriage to Bothwell, but also the civil war that followed and her own inglorious flight to England – seems to have been driven by a series of panicked, short-term solutions which betrayed a fundamental misunderstanding of the wider picture. Her story is a tragedy, no doubt about it, but it’s a tragedy in which other people made the moves in the game and Mary simply suffered for it – as far as I can tell. 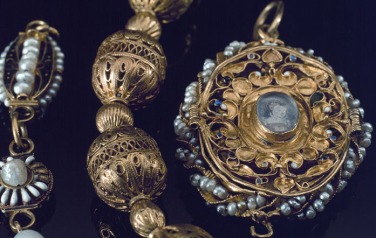 Some of the gorgeous jewels in the exhibition

What the exhibition made vibrantly clear to me was that, despite her unfortunate decisions, Mary was a bona fide Renaissance woman. By the time she returned to Scotland as a young widow, she had lived in France for all but five years of her life. She’d grown up in what was probably the most remarkable court in Europe at that date, rich with chivalry and romance, at the time that Primaticcio and his team of Italian painters were bringing the Florentine Renaissance to Fontainebleau. When she came back to Edinburgh, she brought this lifestyle with her – literally: twelve merchant ships were hired to carry her wardrobe, furniture, hangings, horses and other possessions. It must have been a dazzling homecoming. And she transplanted her favourite aspects of the French court to Scotland, which had already begun to embrace Renaissance values under Mary’s father, James V.

I had a glimpse of a glittering world full of young people, laughter, music and dancing, hunting and works of art. Most striking for me, along the latter, were the beautifully carved wooden panels, often in oak, which ornamented the palaces at Linlithgow and Stirling, still in absolutely fantastic condition. These fine examples of craftsmanship stood among a wealth of exhibits of all sorts – printed books, such as John Knox’s Monstrous Regiment of Women; fine enamel portraits by Léonard Limosin, the like of which I’d never seen before; and gorgeous jewellery and pendants, among which my favourite was a necklace of ‘pomander beads’, hollow pierced golden beads which could be filled with perfumes or incense.

The exhibition did a very good job in that it created a rich, multifaceted picture of Mary’s world. Each of the key personalities was represented with a portrait, ranging from the lovely miniature of Mary at the age of eighteen, by Clouet, to the misleadingly cherubic miniature of Darnley attributed to Levina Teerlinc, a Flemish female artist whom I’m ashamed to say I’d never heard of before. There were portraits of Walsingham, Cecil and Elizabeth – who was represented by nothing less than her Coronation Portrait from the NPG – and even some images of more minor figures, such as a rather striking but anonymous roundel portrait of George Buchanan, tutor to James VI, from the Scottish NPG.

A copy of the effigy from Mary’s tomb

There were some more unusual exhibits: a number of dolls dressed in scale-model outfits to represent Henry VIII, Mary, Darnley and Elizabeth, for example, which were quite amusing but didn’t really fit the tone of the rest of the exhibition. And one of the most intriguing exhibits was displayed only in digital form: a 3D reconstruction of what Mary might actually have looked like, based on her various portraits. This appears at intervals on a screen in the centre of the exhibition and I would have loved to see a ‘hard copy’. I’m always intrigued to get a better idea of what historical people ‘really’ looked like, which is why I was so taken with the head of Richard III that was constructed after the discovery of his body in Leicester.

The very fact of Mary’s popularity and romantic status raises questions, though. A vast number of exhibits are ‘traditionally associated’ with her rather than being proven hers in fact. After all, we are dealing with a woman who was (and is?) considered a Catholic martyr and so many of her relics require a degree of faith. It’s important to remember that the exhibition is partly a picture of noble culture in Mary’s day (things similar to those she might have owned), and partly a testament to the hold she’s exerted over popular imagination (things people have come to believe she owned). Nevertheless, this is a fascinating collection of objects which gives a compelling insight into the age that produced this complex, troubled and tragic figure.

The appearance of Mary Queen Scots, recreated by scientists at Dundee University