People have been telling me to read Ali Smith for years, but I haven’t yet got round to any of her novels, not even How to Be Both, which has been urged enthusiastically on me by my friend I. However, I hope to exculpate myself now, because I’ve finally embarked on Smith’s oeuvre in the form of Girl Meets Boy, one of the Canongate Myths series. I found it charming, if not overwhelming: it’s a sweet story of first love and how to have courage; a dreamlike tale of how we love most truly when we love the person rather than the outward shell. Based on Ovid’s story of Iphis, it uses the Scottish city of Inverness as the stage on which to thumb its nose at gender norms.

END_OF_DOCUMENT_TOKEN_TO_BE_REPLACED 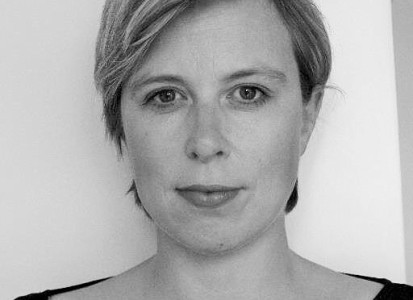 Lyrical and heartfelt, this novel set in 12th-century Scotland feels like a natural successor to King Hereafter. It occupies much the same territory, following the ambitious young lord Somerled as he negotiates the rivalries and alliances of the Western Isles and develops a name for himself as a fearless warrior. Based on a figure who is as tantalising a blend of history and myth as Macbeth himself, it’s a novel that lingers on the feel of the wild land and the yawning breadth of the playful, fearsome, lovely sea, despite the occasional savagery of its battle scenes. With characters you truly grow to care about, and with a wonderful star-crossed love story at its heart, it’s a rewarding read.

END_OF_DOCUMENT_TOKEN_TO_BE_REPLACED

Striking and unusual, Polly Clark’s debut novel delves deep into one of the most isolating emotions we can feel: that of being a stranger. Two interwoven storylines unfold in the Scottish spa town of Helensburgh, eighty years apart, and spark unexpected connections between their two characters. One is Dora Fielding, a poet who has left her comfortable liberal world in London to move up north with her husband Kit. The other is also a poet: the young W.H. Auden, fresh from Oxford and trying to settle into a new career teaching at Larchfield boys’ school in Helensburgh.

END_OF_DOCUMENT_TOKEN_TO_BE_REPLACED

John Knox made a brief cameo appearance in my GCSE History course, mainly to demonstrate that many people in the 16th century thought female monarchs were A Bad Thing. As part of a monstrous regiment of my own, in my girls’ school, I never had the chance to learn much more about him than the title of his most famous work, which naturally made me regard him with slight disapproval; and now, fifteen years later, it’s time to finally redress the balance. Marie Macpherson’s novel – the first in a proposed trilogy – turns him from merely a name on a history syllabus into a much more rounded and appealing figure, set firmly in his time.

END_OF_DOCUMENT_TOKEN_TO_BE_REPLACED

Sea-mist, pinnacles, towering fortifications and nary a level street between them: Edinburgh certainly is a captivating maze of a place. Although my time there was dominated by research – libraries, archives and lots of fabulous old letters – I decided that I had to make time for a bit of sightseeing. The exhibition on everyone’s lips at the moment is the Mary, Queen of Scots show at the National Museum of Scotland. It was just down the road from the library where I’d spent the best part of an extremely wet morning; so I went off for a refreshing dose of the Scottish sixteenth century.

END_OF_DOCUMENT_TOKEN_TO_BE_REPLACED 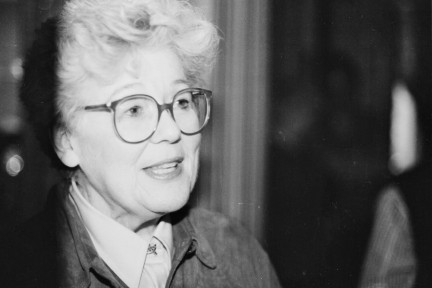 For the last week or so, I’ve been lost in another world – in the sea-spray glinting off a longship’s figurehead, and the sheen of sunlight on helms and spears. It is the dawn of the 11th century. Viking culture, with its pillaging, sagas and piratical leaders teeters on the edge: and, falling, begins to assume the Christian values and the lineaments of the world we know today. It is also the moment when one man, by chance or the will of the Fates, finds himself in a position to begin unifying the disparate earldoms of Alba, Caithness and Orkney into a political entity that will assume the more familiar name of Scotia. That man is here most often given his pagan, Norse name: Thorfinn. History knows him by a much more famous name. Macbeth.

END_OF_DOCUMENT_TOKEN_TO_BE_REPLACED 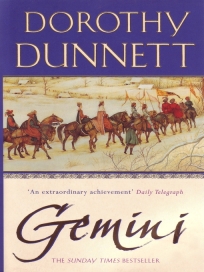 The House of Niccolò: Book 8

The House of Niccolò: Book VIII

And so it ends, after weeks lost in this rich, beguiling other-world: it ends with sun, and an orchard near Sevigny, and a teasing glimpse of another Francis Crawford. I stayed up until midnight last night to finish this: there was no way, at this stage, that I could go to bed with only a hundred-odd pages to go.

END_OF_DOCUMENT_TOKEN_TO_BE_REPLACED 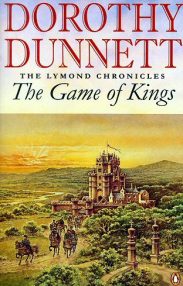 The Lymond Chronicles: Book I

It is Scotland, in the 1540s. Edward VI is on the throne in England, the realm governed by his Protectors. In Edinburgh, Mary of Guise rules as regent for her infant daughter, later to become Mary Queen of Scots. The vultures, French and English, gather around the little queen, hoping to benefit from her marriage, while the Scottish lords beat back wave after wave of concerted English invasion. Into this political powder-keg comes Francis Crawford of Lymond: nobleman, wit, exile and ex-galley-slave, determined to prove himself innocent of a six-year-old charge of treason.  ‘Lymond is back,’ says the first line of the book; and the game can begin.