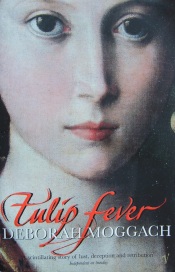 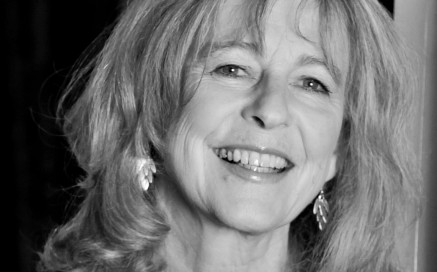 How I wish I’d known about this book when I went to Amsterdam! I always enjoy taking appropriate reading material on my travels and this would have been absolutely perfect. Moggach’s novel of love, art and betrayal is set in the Dutch Golden Age, at a time of millwheel ruffs and dark clothing, merry companies in taverns, and maids in linen caps sweeping the steps of canalside houses. In short, it reads like the literary equivalent of the National Gallery’s Vermeer show.

Moggach has a painterly sensitivity to surroundings and settings, and her scenes are crowded with the ephemera of Golden Age still lives or interior scenes, often calling particular paintings to mind. This is no accident: my edition comes with sixteen colour plates of paintings by Pieter de Hooch, Vermeer, Nicolaes Maes and Pieter Claesz. Heda, among others, with a Rembrandt thrown in for good measure as well. Taking the tantalising psychological obscurity of these genre paintings as her inspiration, Moggach constructs a possible inner life for the men and women who populate them: the solitary young woman reading by the window; the artist labouring in his studio; the maidservant sharing a coy grin with the viewer while her master and mistress sit at dinner in the room beyond.

The mirrored moments are stilled, suspended in aspic. For centuries to come people will gaze at these paintings and wonder what is about to happen. That letter, what does it say to the woman who stands at the window, the sunlight streaming on to her face? Is she in love? Will she throw away the letter or will she obey it, waiting until the house is empty and stealing out through the rooms that recede, bathed in shafts of sunshine, at the back of the painting? Who can tell? For her face is serene, her secrets locked into her heart. She stands there, trapped in her frame, poised at a moment of truth. She has yet to make her decision.

It is 1636 and, in his comfortable house on the Herengracht, Cornelis Sandvoort decides to commission a portrait of himself and his pretty young wife Sophia, from the promising artist Jan van Loos. Wearing their finery, posed to perfection, the couple are to be immortalised as the ideal image of wedded bliss; but the truth recorded on the canvas is not the truth that weighs down Sophia’s unfulfilled, dulled heart. At the first sitting, she finds the young painter impudent. At the second, a spark of sympathy passes between them. By the time the third sitting comes around, Sophia has decided that she no longer wishes to be the dutiful, placid, simple young wife shown in her painting; and events have been set in motion whose ripples will affect the lives of everyone involved. Meanwhile, the Sandvoorts’ maid Maria pursues her own amours with the fishmonger Willem; and all over Amsterdam the tension rises as the populace becomes increasingly addicted to the get-rich-quick dealing frenzy of tulipomania.

The novel is short and very easy to read in a quiet, unpretentious way, so I can’t really say much more: save to repeat that I enjoyed it very much, as it chimed so happily with my current fascination with all things Golden Age. Moggach writes with the clarity and simplicity of a Vermeer picture, and despite the love affair that drives the story to its dramatic climax, the novel as a whole has an elegant serenity – so very like one of the paintings from this time. If you are interested in this period, or enjoy a shot of atmospheric historical fiction, this is worth your time: it won’t take you long to read (I got through it in a lazy evening) and it gives you a real flavour of life in 17th-century Amsterdam. I found it rather ironic, considering the emphasis on Dutch painting throughout, that the image chosen for the cover is a detail of Parmigianino’s Antea. Were there really no suitable 17th-century Dutch portraits of women? Having passed a few hours at the Rijksmuseum, I find that hard to believe. And yet… There is something suitably serene and enigmatic about the cover of my edition. I certainly prefer it to the cover of the present Kindle version, which reduces the book to yet another historical novel with a generic headless female torso on the cover.

This is the first book I’ve read by Moggach, although I see that she also wrote The Best Exotic Marigold Hotel, which was made into a film recently. Has anyone else read more of her work? Is there anything else I should look out for?