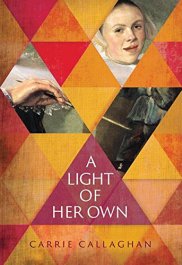 In 1633, a young woman came before the Guild of St Luke in Haarlem, asking to be admitted as a master painter. She was Judith Leyster, a painter of domestic scenes and merry companies, and her acceptance into the Guild made her the first woman to be given such an honour. Carrie Callaghan uses the limited documentary evidence for Leyster’s life and career as the basis for this novel, which follows the ambitious young artist from her days as an apprentice in her master’s attic to her struggles to establish herself in an unwelcoming, male-dominated field. Joining other books set in the Dutch Golden Age, such as Girl with a Pearl Earring, Tulip Fever, The Miniaturist and Midnight Blue, it offers a glimpse of Dutch art in its most celebrated period – although I felt that this novel (unlike Leyster herself) didn’t live up to its own ambitions.

Judith Leyster knows from the beginning that she will have to fight for recognition. She has watched her fellow apprentices in Frans de Grebber’s workshop go on to greater things while, at the age of twenty-three, she still finds herself doing the least prestigious tasks. But she perseveres. Her training has given her the chance to blossom as an artist, creating warm scenes of merriment or music-making, some of which she dares to sell in an illegal auction. That’s the trouble in Haarlem: only Guild members are allowed to sell their works and the Guild dominates everything. It’s through Judith’s auction that she comes into contact with the French bravo Lachine, who gives her an extraordinary commission. This work will bring her the much-needed funds to acquire her own studio space, but it also draws her into an uneasy business relationship with Lachine: a man with whom it isn’t wise to become too involved.

While Judith faces up to the misogyny among her fellow artists – even after being accepted as a Guild Master – her friend Maria endures her own struggle to find a place and purpose in the world. Maria is Frans de Grebber’s daughter and, as such, a mildly talented painter; but also, as such, a closeted Catholic in a world where only the Reformed faith can be openly practised. Tormented by the stress of hiding her faith, and convinced that she has sinned by leading on the scholar Samuel Ampzing, Maria has to find some way to atone. When she hears that the Guild’s relic of St Luke is ready to be brought home, from safekeeping with an itinerant priest, she eagerly volunteers to go off in search of it – only to find herself drawn into a much more direct form of self-sacrifice.

The title, of course, can be interpreted in lots of different ways: Judith’s gift for creating warm or candlelit ambience in her paintings; her fierce ambition, driving her on in the hope of a glorious future that only she dares to imagine; or Maria’s spiritual intensity, which offers a guiding beacon in an otherwise troubled life. The book is certainly a tale of how young women try to find ways to express and fulfil themselves in a world that has limited acceptable roles for them to fill. And it might have been more satisfying if Callaghan had dug deeper into her two main characters and given them a bit more heft. As it was, neither of them felt complex and rounded enough to convince me. Maria in particular seems to flit from one thing to another in a way that I simply didn’t believe. Would a young woman of good family really be allowed to go off alone to Leiden, without a maid or servant to accompany her? And her disappearance with the healer Sara didn’t fit with everything else I knew about quiet, careful, earnest Maria.

I also found it odd, not to mention irritating, that Judith is blamed towards the end – implicitly by the author as well as other characters – for putting her own future and ambition ahead of an interest in her friends and family. Why shouldn’t she? Her parents have abandoned her, leaving behind nothing except a tarnished family reputation that Judith is trying to restore. She has tried to talk to Maria about the half-burned painting that Maria hides under her bed, but Maria clams up like an emo teenager. Whatever isolation Maria faces is her own doing, not Judith’s. And Judith’s felonious brother Abraham is a feckless waste of space who only threatens to make his sister’s life even more difficult. But apparently, as a woman, Judith is supposed to be compassionate and patient nonetheless. It’s strange that, in a book that superficially celebrates female talent, we find ourselves told that ambition is less suitable in a woman than a caring and nurturing nature – a message that wouldn’t have seemed out of place in 17th-century Haarlem itself. Are we supposed to be rooting for Judith or judging her?

Now, I’m not a specialist in this period and, as very little is known about Judith, I’m not the person to judge what is art-historically correct and what isn’t. Callaghan writes a welcome afterword, explaining the key areas where she diverted from historical fact, but she doesn’t, for example, tell us whether the convoluted (and unconvincing) linseed oil conspiracy is based on fact or her own invention. It does, however, raise an interesting question: in times when art is booming and young artists are eagerly coming out of the woodwork, how do you keep control of production? If you have an audience eager to buy pictures as a new sign of social status, how do you prevent the field from becoming glutted, and make sure that the established artists have enough ongoing demand to survive? Perhaps it isn’t a bad idea to restrict availability of a key ingredient, to limit the amount of painting that can be done… but I couldn’t help feeling that this was done in a rather pantomime-villain, cloak-swirling, moustache-twirling way, with lots of meetings in dark corners while wearing wide-brimmed hats. A big thumbs up, though, for cameos by a number of lesser-known artists – Pieter Molijn (a fellow Londoner!) is a personal favourite, as a drawings bod – and top marks for resisting the urge to have a walk-on role for Rembrandt, even though he’s mentioned in passing. A mention of Jacques de Gheyn, a favourite artist, also cheered me up enormously. Callaghan has obviously done her artistic research, but unfortunately most of Haarlem’s great artists don’t really develop beyond being disapproving bearded antagonists of Judith’s.

Ultimately, therefore, something of a curate’s egg, which never really gelled. It might have been more satisfying if we’d cut out (the fictional) Maria’s erratic journeys and focused more deeply on Judith’s struggles. Yes, we do get this, but not enough. Somehow Judith never quite jumps off the page; and, as I’ve said, I felt a little uncomfortable with the undermining of her ambition and her journey towards the end. Her character development seems to be forgotten about in the complexities of the linseed oil conspiracy, and secret meetings of skulking male artists. Judith deserves better. She was a remarkable woman and a vivacious, talented artist (see her magnificent Self Portrait below). If you’re keen to learn more about her art and the few facts we do know, take a look at this catalogue for an exhibition held in 1993. 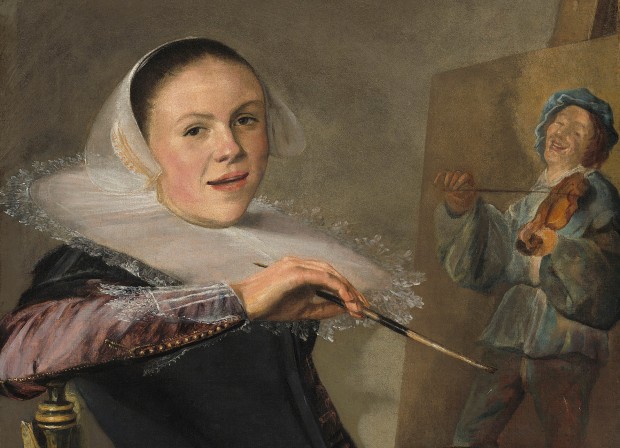