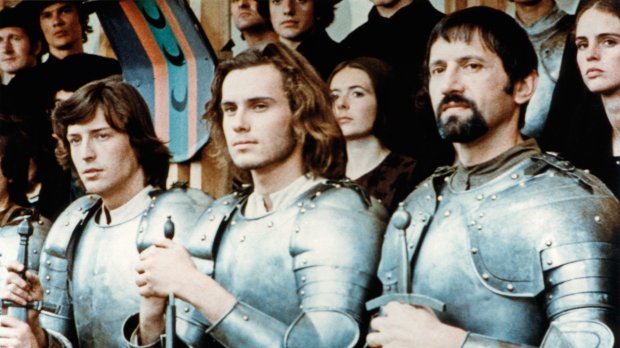 LoveFilm strikes again with this 1974 film, which has been on my Amazon wishlist for almost ten years, ever since I first heard about it at university. As a slice of Arthurian legend, I thought it sounded rather wonderful and yet, for one reason or another, I haven’t got round to watching it until now. With the weight of ten years’ expectations behind it, I regret to say the film disappointed me even more than it might otherwise have done.

Now, in this particular case I have taken the time to read a bit about Bresson and the film in the aftermath of watching it, because I know that many of the things I didn’t like can be explained by his style. I was rather surprised to see how reverential many of the reviews were. At the time of writing, it has a rating of 7.9 out of 10 on the IMDB and a rating of 94% on Rotten Tomatoes, so the only conclusion I can draw is that I clearly know nothing and am incapable of recognising a good film when I see one. I can see the stylistic techniques that Bresson chose to use and I can understand how these fit in with his wider vision as a filmmaker; but recognising the presence of a director’s techniques does not mean that I have to find them either enjoyable or successful. 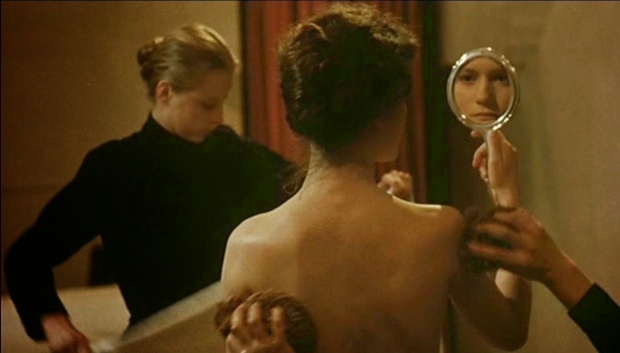 The film begins as the Knights of the Round Table return to Arthur’s castle after two years of fruitless searching for the Holy Grail. Their numbers have been depleted by struggles within the group and by losses while on their quest. (Perceval, who is one of the missing knights, may have chosen not to return precisely because he has found the Grail.) However, back at the castle the knights wait to find out what their next quest will be, while Arthur grieves for those who have been lost. Lancelot goes secretly to meet with Guinevere, who hopes that they will be able to continue their affair begun before his departure, but Lancelot knows that rumours of the liaison are already running rife among the knights. Mordred, envious of Lancelot’s position and successes, hopes to expose the affair to Arthur and gathers supporters around him; while a smaller band of knights, headed by the noble Gawain, still stands firm for Lancelot. When a tournament is proclaimed in nearby Escalot, the knights’ rivalries begin to build to a head, which will have tragic consequences both for their fellowship and for the kingdom as a whole.

I began to realise that I’d wasted ten years of anticipation roughly around the time of the pre-credits action sequence, in which a few knights ride repetitively through the same portion of forest while their various victims are shown in abrupt shots, with blood spurting from various dispassionately-severed parts of their anatomy. It would have looked faintly ridiculous in any case, and it isn’t helped by the fact that it was mercilessly parodied in Monty Python and the Holy Grail. I kept expecting one of the exuberantly-gushing corpses to leap to his feet, declaring, ‘It’s only a flesh wound!’ It probably doesn’t say much about me, that I find it so hard to see past the parody, but at the same time I believe that a really good film should be strong enough to withstand its parody.

And what is this obsession that Bresson has with feet? Hooves, booted feet, feet in sabatons… The joust at the tournament was made up almost entirely of shots of hooves, with the sound of breaking lances but never the sight of one (though we did see various opponents dashed from horseback in unpleasant ways). Perhaps it’s true, as I read in one review, that this was an attempt to show the vulnerability of the knights; but I would have preferred seeing their faces. 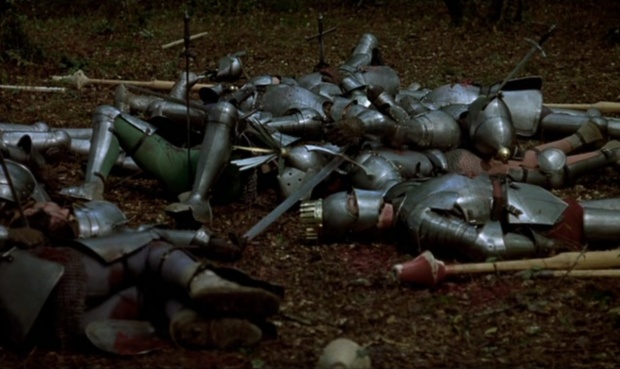 There are many laudatory reviews which talk about how Bresson has stripped away the traditional heroic, romantic and sumptuous aspects of the story in order to expose the raw human emotions at the core. It’s true that everything about the film – the absence of music; the simplicity of the set; and the rather stiff filming style – means that our attention is focused on the people at the heart of the drama. This would have been fine if there had been enough discernible passion, anger, despair, or indeed any emotion whatsoever to engage me. However, Bresson also insisted that his actors show no emotion – if I understand correctly – to ensure that the story’s power was kept pure of distracting elements such as the actor’s interpretation.

I would have enjoyed it far more if the austere, stripped-back set had been coupled with actors who really inhabited their characters’ emotions and who could convey to me the arrogance, desire and jealousy that characterised the Knights of the Round Table just as much as ordinary people. Alternatively, I would have found it interesting to see this kind of emotionless acting in a more elaborate, richly-decorated setting, which might have made points of its own about outward display versus inward feeling. But to have nothing much to distract the eye, and nothing much to engage the heart, leaves a film looking as if it just isn’t very well made. Plus, the fact that the tournament and all the battles happen off-screen – a brief fade-to-black with the sound of a few men banging metal rods together, followed by yet another spread of death and destruction – just makes it look as if the filmmakers were crippled by a very low budget. (Yes, I am bracing myself for the ranks of defenders of the auteurs to swing by and drive their lances into the quivering vitals of my argument.) 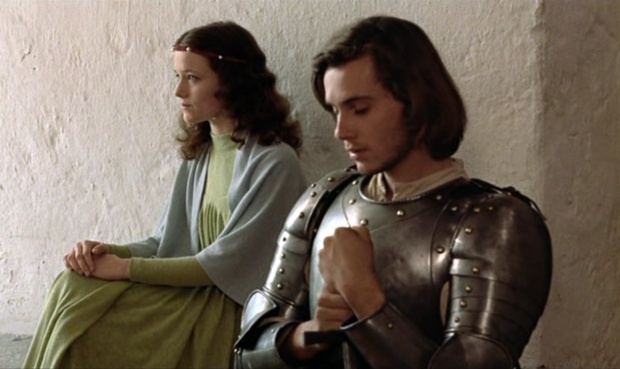 Don’t write me off as a complete heathen: I could appreciate that many of the shots had an austere beauty. The lovely Laura Duke Condominas, who played a startlingly young Guinevere, was sometimes shown almost haloed with light, which gave her an ethereal, Pre-Raphaelite beauty. At one point her hands are shown interleaved with Lancelot’s, in a shot which conveyed more emotion than almost anything else in the film. The knights, too, all looked the part, though it probably comes as no surprise to hear that Gawain (Humbert Balsan) was the one whom I most enjoyed watching. It wasn’t just for the obvious reason: he was also the only one who was managing to act a tiny bit. This is all well and good, but this is definitely a film for the self-professed cognoscenti to wallow in. If anyone, like me, is happier with engaging stories and actors who are actually trying to convey emotion, it’s best to look elsewhere.

It’s odd, isn’t it, that Arthurian legend (like Greek myth) doesn’t seem to translate very well into film? It comes to something when the most enjoyable treatment of the legends to date, that I’ve seen, is the TV series of Merlin, which doesn’t even make a pretence at being authentic. Do you have a favourite Arthurian film? If so, what is it? Do share your thoughts, because I know there are some I haven’t seen and I’d love to hear of any good films on the topic that I might have missed.