Considering my interest in the Old Masters, my affection for swordsmen, and my possible weakness for doomed heroes, it’s hardly surprising that I have a soft spot for Caravaggio. One of the first exhibitions I saw as a teenager was The Genius of Rome, a feast of the Caravaggisti held at the Royal Academy in 2001, and from that moment I was captivated by the violent swagger of the period.

My first substantial introduction to Michelangelo Merisi da Caravaggio himself was in Peter Robb’s M, a book which seems to be either loved or loathed. I adored it and at some point soon I’ll have to go back and read it again. Strangely, for so turbulent and dramatic a figure, Caravaggio hasn’t made it to the screen very often. Indeed until recently I thought that the only film version was Derek Jarman‘s stylised 1986 biopic; but then, to my delight, I discovered this 2007 miniseries made for Italian TV. Needless to say I got my hands on a copy as soon as humanly possible.

Caravaggio has become immensely popular in the last few years and, even if you don’t know much about him, you’ll recognise some of his paintings: striking contrasts of black hair and red cloth; tumults of figures in dark rooms lit by bright shafts of light; weathered old men playing the parts of saints; and pretty boys clutching lutes or baskets of fruit. This film covers his entire life, from his childhood in the little town of Caravaggio in Lombardy, through his apprenticeship with the comparatively obscure Simone Peterzano in Milan, to his arrival in Rome and his eventual entry in Cardinal Del Monte’s service, and then on to the later stage of his career, when he ricocheted between Rome, Naples, Malta and Sicily in an attempt to keep one step ahead of those who wanted to kill him. 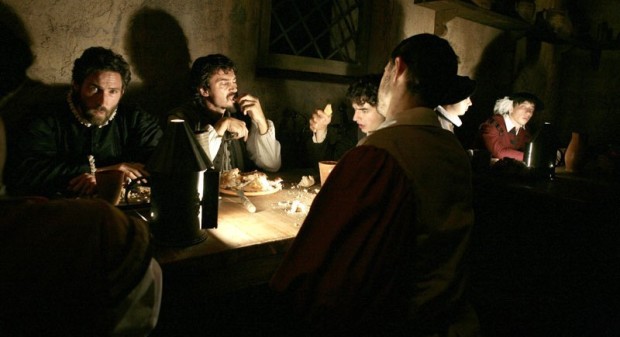 Supper at a tavern with a true Caravaggesque aesthetic

In the early days, we see Caravaggio struggling his way up the artistic hierarchy in Rome, despite the antagonism his methods provoke from the Roman Academy (embodied here by Federico Zuccaro who pops up occasionally to sneer and make cutting comments). There are cameo appearances from other artists as well – Peterzano, of course (who comes across as immensely unpleasant); Cavaliere d’Arpino; Giovanni Baglione; and Jan Brueghel (which threw me slightly). Orazio Gentileschi, whom I would have thought was crying out for a role, was inexplicably absent. As Caravaggio rises to success, supported by Cardinal Del Monte and by his childhood friend Costanza Colonna, we see glimpses of some of the greatest works of his career, often accompanied by the kind of tableaux of models beloved of art biopics. This can sometimes be a bit tacky, although here it generally works because Caravaggio was one of the few artists who always worked from nature, rather than from preliminary sketches. Furthermore, the casting director on this miniseries has managed to track down actors who look plausibly similar to the figures in the finished pictures, so I found it rather fun.

The only thing I would say is that there wasn’t much sense of the artistic process: we saw Caravaggio grinding paints now and then, but most of the time it looked as though he’d managed to turn out a full size masterpiece in a couple of hours. I’d have liked a better sense of how he painted the pictures – which is something, if I remember correctly, that you get a little more in Jarman’s film. And of course, when Caravaggio isn’t painting, he’s swaggering around Rome with his ne’er-do-well friend Onorio Longhi, fighting Spaniards, taunting Giovanni Baglione and fraternising with the stable of prostitutes run by Ranuccio Tomassoni.

The best thing about the series is how good it looks. Even though the production probably didn’t have a huge budget, it had lots of fabulous sets on its doorstep and took full advantage of them, and everything is drenched with sun and looks lovely. And if there is anyone alive who looks more like Caravaggio than Alessio Boni, I will eat my hat, feather and all. He tackles the role with great aplomb and does very well, especially at blending the expected terribilità with enough gentleness to make Caravaggio a sympathetic character. Indeed, there were times where I thought perhaps he was a little too ‘nice’, but no doubt we all have different opinions about our historical favourites. I was interested to see that they put great weight on his relationship with Costanza Colonna, to the point of implying an impossible romance, although the emphasis is firmly upon Caravaggio’s dalliances with the courtesan Fillide Melandroni and his model Lena.

In the interests of fairness, there is a coy hint of a fling with Mario Minitti as well, although there was no sign of Francesco Boneri (called Cecco). Cecco was the young model for David with the Head of Goliath (in which Goliath’s head is a self-portrait of Caravaggio); the painting itself made an appearance at the end. I can understand why they skirted round Cecco himself, although I was sad that there was no attempt to do a tableau with him wrestling a large sheep for St John the Baptist with a Ram. However, considering his likely age at the time, I suspect there were strong legal reasons for not going anywhere near it, let alone Amor Victorious, for which he also modelled.

The famous duel in the tennis court: Caravaggio (Alessio Boni) goes up against the hired thugs of Ranuccio Tomassini (Maurizio Donadoni)

It’s all done well and the chronological approach is admirably methodical, but I got the feeling there could have been a bit more spark and drama to it all. The material was there – duels, street brawls and tortured artistry – but it just didn’t fizz. And I was surprised by what was left out. Where was the episode with the plate of artichokes, for example? And, although we see Caravaggio and Longhi happily tormenting Baglione in the street, we don’t see the natural follow-on: their trial for defamation, which is one of the few occasions in Caravaggio’s life when we have evidence preserved word-for-word (and includes a few more cheerful insults about Baglione for good measure). On the other hand, we had two moments which came very close to the ‘Good Morning Dr Johnson’ School of History, in Caravaggio’s meeting with Beatrice Cenci and in his presence at Giordano Bruno’s execution.

Looking back over the miniseries as a whole, it had a rather staccato feel, perhaps because it was designed to fit around commercial breaks – their places now commemorated by frequent fade-to-blacks. I wonder whether I have the full version here – there are two lengths available on DVD and I have the longer length at 211 minutes, but perhaps there are still scenes that have been cut out of the original. And there is one jarring technical issue: the soundtrack doesn’t always match up to the actors’ mouths. Whether this is because many of the cast weren’t native Italians and were dubbed, or whether it’s just technical sloppiness, I don’t know; but it’s something that I found very distracting.

This is like the curate’s egg: good in parts. I was very impressed with Boni as Caravaggio and I delighted in the way that the paintings and the period were brought to life before my eyes. But it doesn’t have quite the lyricism or the guts that would do full justice to the subject. Alas, it seems that The Great Caravaggio Movie remains to be made (I’m open to an HBO series too: I’m not fussy). If it is ever made then I have a Hollywood-level casting recommendation to suggest: Romanzo Criminale‘s Pierfrancesco Favino, who not only looks very much like Caravaggio (though perhaps not quite as much as Boni), but has an English-language CV as well. I think he’d be rather good, although he’s already 44 so someone had better hurry up before he gets too old to play someone who died at 39…

The master at work: Caravaggio (Alessio Boni) painting The Burial of St Lucy

2 thoughts on “Artists on Film: Caravaggio”