(directed by Mark Rylance, The Old Vic, London, until 30 November)

Much Ado About Nothing is the closest that Shakespeare came to writing a screwball comedy and I love it dearly, mainly for the barbed word-play. I’ve seen several versions (my favourite is still the sun-drenched Kenneth Branagh film) and I was very interested by the idea behind Mark Rylance’s new adaptation at the Old Vic. Here Beatrice and Benedick are played respectively by Vanessa Redgrave (76) and James Earl Jones (82): two older people who, after watching their young friends fall in love, are finally persuaded to end their age-old skirmishing and embrace their affection for one another before it’s too late. I thought it was a marvellous take on the play – but unfortunately the production doesn’t live up to the brilliance of this concept. It was rather disappointing because, with such a director and such actors, it should have been a cast-iron success.

The prince Don Pedro and his soldiers return from the wars to the house of their friend Leonato and his family. Don Pedro’s right-hand man, Claudio, is in love with Leonato’s daughter Hero and successfully asks for her hand in marriage (with a little help from the prince). But not everyone admires Claudio, the golden boy. The prince’s illegitimate half-brother, the conniving Don John, is jealous of Claudio’s success and plots with his henchmen to come up with a way to put a spanner in the works. While Don John plots, the rest of the household find more wholesome means of distraction. The cynical Benedick is a much-loved cornerstone of the prince’s troop and has a long-established ‘merry war’ with Hero’s cousin Beatrice – a woman as witty and as fiercely protective of her independence as Benedick is. (There is a strong suggestion that there was once a romance between them, which ended badly.)

As the two of them spark off one another for the household’s amusement, Don Pedro comes up with a brilliant idea for a practical joke. Between them, the company will play Cupid: it is their task to make Beatrice and Benedick fall in love with one another. And so, to their amazement, the two antagonists find themselves conveniently overhearing conversations about how their supposed enemy is wasting away from love of them, but is too proud to admit it… and both of them begin to find that perhaps their hearts are not as cold and closed to love as they always claimed. 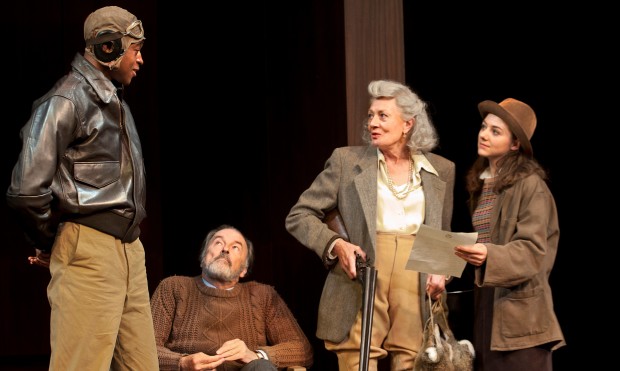 This adaptation takes place in an English country house in 1944, with Leonato doing his best to run the estate while all the young men are away. The women are doing their bit too: Hero is usually dressed as a land girl, while Beatrice’s first entrance is with a shotgun, holding a brace of rabbits. This household, lingering under the shadow of war, is desperate for diversion; and that comes in the form of Don Pedro and his glamorous, charming troop of GIs from the nearby American air base. In principle, I thought this was a perfect update for the text, and it offered the chance to make the ‘comic’ sections (which, in the productions I’ve seen, have often been painful, not comic) actually funny. Here Dogberry becomes a British bobby on a bicycle and his Watch is made up of a couple of Boy Scouts and a furtively-smoking girl in pigtails and dungarees. These children are the ones who, in true Enid-Blyton fashion, manage to outwit Don John’s wicked soldiers and secure their confessions.

So what went wrong? First of all, the set was a bit odd: a bare stage with a big wooden box, which looked like a very large Ikea bookshelf and was surely unnecessary. All it did was block out light, make the stage feel more closed in, and cut off bits of the performance from anyone sitting anywhere other than the central seats. It all felt a bit of a mess. Second, and more seriously, the acting was by no means of the highest standard, with two exceptions. Vanessa Redgrave was a shining example of The Great British Actor, effortlessly outclassing everyone else on the stage and delivering her lines with consummate ease. And Peter Wight managed the rare accomplishment of giving Dogberry a bit of real humour, wringing every last bit of pompous malapropism out of his lines. Everyone else was too obviously speaking verse. You can give a Shakespeare play as original a setting and as revolutionary a concept as you like, but if people can’t handle the text comfortably, it just doesn’t work.

As Don Pedro, James Garnon was the best of the soldiers; everyone else seemed rather awkward, perhaps because they were concentrating so hard on their American accents that they weren’t able to deal with the fluidity of Shakespeare’s prose at the same time. And I’m afraid that James Earl Jones just wasn’t quite up to it as Benedick. I feel bad for saying this, because I’m in awe of anyone who can remember all their lines in a Shakespeare play, let alone at the age of 82, but he is clearly getting a bit frail. While Vanessa Redgrave was positively sprightly, he shuffled around the stage very slowly and the scenes often seemed to have been designed around allowing him somewhere to sit down. He was also very hard to understand, especially in the first half, when the reverberations of his beautiful deep voice, coupled with a fairly quick delivery, meant that the words all ran into one another and I could only follow what was going on because I’ve watched the Branagh version so many times. Someone may have had a word with him in the interval, because he spoke more slowly in the second half; but it was a major issue. In the right hands, Benedick is a glorious character (in the last stage version I saw, David Tennant had the audience practically eating out of his hands), but unfortunately here James Earl Jones just played it too sedately for the character to have the necessary sparkle.

Despite the originality of the play’s concept, making Beatrice and Benedick into older people who mellow towards one another, and despite Vanessa Redgrave’s splendid performance, this production has issues; and I don’t see that they can be overcome with further rehearsal (they haven’t improved since people made much the same comments about the press previews). It was a great idea, but unfortunately it just hasn’t translated into reality. You’d be much better off getting a DVD of the Branagh version; or perhaps the modern-day Joss Whedon version, which has received so much critical acclaim. I haven’t seen that yet, but I hope to watch it in the next few weeks…