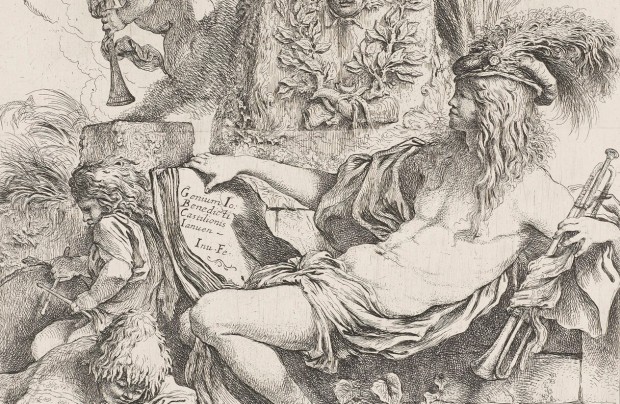 You might not have heard of Giovanni Benedetto Castiglione before, even though he was one of the most innovative and tempestuous Italian artists of the 17th century. Short-tempered and prone to reacting badly to criticism, he spent much of his career keeping one step ahead of lawsuits as he moved from Genoa to Rome and back again.

He is supposed to have fired a handgun at someone who criticised his work in Rome; he slashed one of his own paintings in front of an unappreciative patron in Genoa (who unfortunately happened to be the Doge); and between 1650 and 1655 he and his brother were involved in no fewer than twelve legal disputes (in 1655, their own lawyer took them to court for non-payment). I’m always fond of a bit of biographical colour and the wonderful thing about Castiglione is that he is also a brilliant and very individual artist.

Immediately after his death he was immensely influential – compare some of his more esoteric compositions to Giandomenico Tiepolo’s Capricci etchings, for example – but now he’s little known beyond specialist circles. Even if you are familiar with his work, it’s probably a very specific aspect of his work: he’s most famous for his oil sketches, drawn with the brush, of herdsmen travelling with their animals. (Once you’re familiar with these sketches, you’ll recognise them straight away: blocked out with fluid, confident sweeps of brown paint, sometimes set off against blocks of grey or blue in the sky.) This exhibition sets out to bring Castiglione back into the public eye, but also to prove to us how versatile he was. No other institution could marshal such a fine display: the Royal Collection has the largest and most dazzling group of Castiglione drawings in the world. The result is a rich cross-section, with drawings shown alongside his etchings and his very rare monotypes, creating an absorbing picture of an artist who was as unconventional in his artistic style as he was in his way of life. 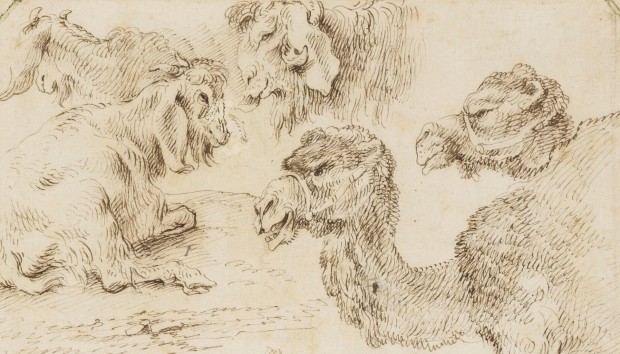 Castiglione was born in Genoa, where he studied with Giovanni Battista Paggi and drew inspiration from the works of other artists active in the city. At this time Van Dyck was in Genoa and I wonder whether Castiglione’s preference for brush-drawing developed out of his knowledge of the Fleming’s very fluid pen-and-wash studies. He was also influenced by Sinibaldo Scorza, an artist best known for his animal paintings; and the earliest of Castiglione’s drawings in this show seems to be a tribute to Sforza: a delightful study of camels and goats (the camels almost certainly copied from a model-book rather than life). Although Sforza’s distinctive style didn’t have any lasting influence on Castiglione’s own draughtsmanship, the animal subjects certainly awakened his imagination. For the rest of his life he created menageries on the move: horses, dogs and cows, plodding beneath feathery trees and accompanied, as time went on, by an ever more elaborate selection of creatures (by time of Noah Leading the Animals into the Ark in the late 1650s, there are deer, poultry and even guinea pigs). They’re wonderful scenes; but unfortunately for the young Castiglione he lived in an age when genre painting of this type ranked pretty low on the scale of prestige: if you wanted to be a successful artist, then you had to establish yourself as a history painter in the grand manner.

And so Castiglione went off to Rome, to learn to tackle the great religious, mythological and literary themes of the period. The exhibition points out that he always had a slightly erudite, philosophical tinge to his ambitions: this was the period when Poussin and Salvator Rosa were also working hard to establish themselves as poet-painters, so Castiglione was in good company. The only problem was that he just didn’t quite click with the grand manner. He had a go, certainly, but his youthful figural works lacked the instinctive energy of his pastoral compositions. The exhibition includes a drawing after Titian’s Sacred and Profane Love – an intriguing example of one great artist attempting to ‘do’ another, and not quite getting it. Castiglione’s version has its own charm, certainly, but his figure-drawing is ropey. However, he continued to develop; and a trip to Naples at about this time introduced him to Andrea de Lione and Ribera, whose works were more in tune with his own artistic vocabulary.

Castiglione was back in Genoa by 1637 and over the next few years his draughtsmanship showed the benefits of his travels, becoming more fluid and confident, with more classical subjects appearing in his repertoire such as the Women and Children praying before a Tomb. He had also begun experimenting with printmaking and in fact his most important contribution to art history is as the inventor of the monotype. These are unique prints, formed by inking onto the flat surface of a plate and transferring the result to paper (there were no etched or engraved lines to hold the ink for a second impression). Second pulls could be made, but they’d be fainter and they’d show all the scratches and imperfections of the plate (this could be extremely effective: there’s one example of a second pull in the show, The Nativity with Angels and God the Father from the 1650s, which has a dazzlingly abstract feel to it). With their rich depth of tone, monotypes were particularly effective at conjuring up the atmosphere of nocturnal scenes – a fine example is the Temporalis Aeternitas of 1645, where a group of figures clusters around a torchlit tomb.

Perhaps the most exciting encounter that Castiglione had in the late 1630s and early 1640s was with the prints of Rembrandt. These had begun to filter into Italy and in fact Castiglione is the first artist we see really making use of them. In direct response, he turned out a series of prints of heads in the mid-1640s, characterised by a marvellously bristly use of the burin. The most beautiful, in my opinion, is Head of a bearded man, where the density of the marks is set off by a blank space, almost like a penumbra, around the old man’s head. Castiglione also used etchings to explore the esoteric subjects that had always attracted him, and these scenes are populated by fragments of classical ruins, satyrs and esoteric paraphernalia such as the giant animal skull in his Diogenes.

In another series he experimented with eerily morbid subjects in nocturnal settings: The Raising of Lazarus is a good example, in which Christ throws a casual gesture over his shoulder towards the tomb. The first sign of Lazarus’s reanimation is the way in which his arms rise into the air of their own volition, like something from a Gothic horror novel. I got the sense that Castiglione was now deliberately challenging the orderly decorum of the grand manner, offering his own far more thrilling and individual take on traditional subjects – ‘if you can’t join them, beat them’. My favourite of his etchings, however, is the audacious print titled The Genius of Castiglione, in which the artist depicts the guiding spirit of his own imagination, wearing a jaunty plumed cap, in a self-consciously esoteric setting (Salvator Rosa would use this as the inspiration for his own very similar print fifteen years later).

For me, the most powerful works in the show were the studies from the 1650s, in which Castiglione’s fluid brushwork has been tightened and contained: the compositions have a stronger core and the denser brown oil is more and more often set off with those glorious blue-grey background tones. By this date Castiglione had learned to work with greater economy – partly out of necessity, because he was stricken with gout – and the resulting sketches have a clarity that’s lacking in some of his more exuberant early works. Noah leading the Animals into the Ark; The Choice of Hercules; The Sacrifice of Noah; and A family with animals in a landscape – all these are simply marvellous. And it’s at this date that perhaps Castiglione finally gets to be the grand-manner painter he dreamed of being as a young man: in The Choice of Hercules, or his series of densely-worked Franciscan saints, he reinterprets the language of Roman classicism with a verve of execution that gives the compositions an attractive liveliness. And yet he still had an instinctive gift for animals: for example, the detail of the hound’s raised head in Noah leading the Animals is sketched in with just a few lines but it’s entirely convincing. To the end of his life Castiglione was devoted to reworking and reimagining the motifs that had preoccupied him since his days as an apprentice in Genoa: the sense of movement, energy and busyness that characterises groups of people and animals on the move. Like many a modern artist, he had a leitmotif that ran through his career. 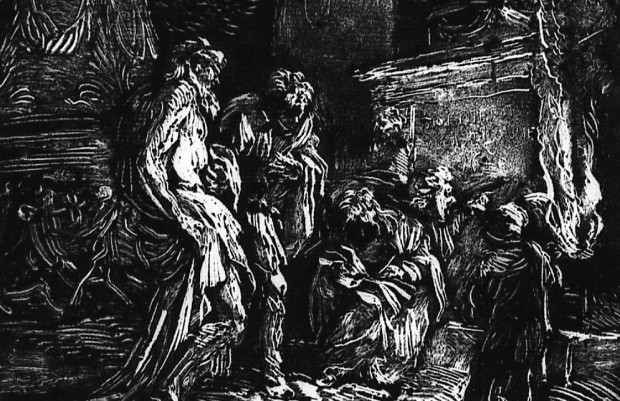 And that’s a contrast – Castiglione and contemporary art – that you’re encouraged to take away with you. Castiglione is on view alongside another exhibition (yes! two shows for the price of one!), called Gifted, which displays more than 100 works on paper presented to the Queen by the Royal Academicians in 2012 at the time of the Jubilee. Between the two rooms of Castiglione, you’re invited to step into the large end gallery for an interlude of contemporary art – a refreshing change of scale from the intricate detail of Castiglione’s works, but also a subtle hint about Castiglione’s own appeal to modern eyes.

This is a super exhibition: clear, lively and engaging, but also traditional in the best sense of the word: it takes a topic and explains it thoroughly, clearly and well, with no misguided attempts to make it cool or to dumb it down. The labels are insightful and, on occasion, surprisingly amusing: the curators both evidently have a sharp sense of humour and have thoroughly enjoyed putting this together. You should certainly try to go, because Castiglione is an artist who deserves to be better known and we’re unlikely to see another exhibition on him in our lifetimes. Bear in mind, however, that what you see here is only the tip of the iceberg: there are many, many more Castigliones in the Royal Collection (and some just as beautiful as those exhibited here), so if you can’t make it to the exhibition, you could always arrange a self-indulgent trip to the Print Room at Windsor to sift through the whole group. And, if you can’t do either, buy the catalogue. I’ve only just started reading it, but it’s uncommonly sprightly for an academic publication and the reproductions are wonderful.